MIUI 9 premieres on the Mi 5X

The Xiaomi Mi 5X is the first smartphone to officially come with the new MIUI 9 out of the box. At least that's the case in China, while the so-called global versions boot ROMs based on MIUI 8.5. The MIUI v9 launcher is based on the latest Nougat revision - 7.1.2, while Oreo will probably come later on with another major MIUI update.

As usual, Google services are not accessible in China, so Xiaomi refocused the ecosystem away from Mountain View's services. For those living elsewhere, the official and not-so-official importers are providing various international (global) ROMs, which come stripped from the Chinese services in favor of Google's. Our unit uses the Chinese ROM, but we were able to sideload all Google services hassle-free from the available App Store. 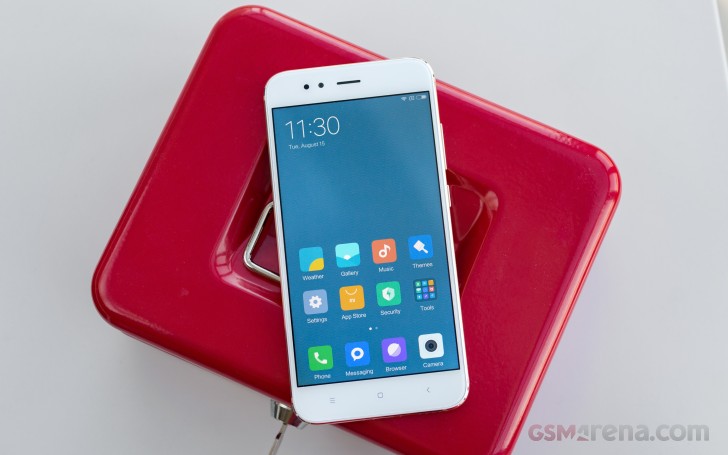 MIUI 9 adds milti-window support, quick replies for notifications, smart app launcher, smart assistance, and smart image search. Yes, there is a lot of "smart" with MIUI 9 and it's possible thanks to the new machine learning process.

There are tons of improvements under the hood, too, such as better RAM management, faster performance, lighter on resources, and improved doze mode. Finally, the interface got a minor graphical overhaul so you'll be able to tell apart the new MIUI from the old ones.

MIUI 9 might be new, but it's still that familiar launcher we're used to seeing and enjoying. It sure got some new looks, but they are just a minor part of the way MIUI is different from stock Android.

The lockscreen is rather trivial - time, notifications, and a couple of shortcuts (including a few new ones - torch, Mi Remote, Mi Home). Once you set up the fingerprint reader, you'll rarely see it though. Still, the Wallpaper Carousel can put beautiful images on the lockscreen every 15 minutes.

The always-on fingerprint sensor is accurate and can take the phone from sleep to the homescreen in a flash (the lockscreen is bypassed). It's as fast as some of the latest flagship implementations, which is quite a treat.

MIUI has a simple philosophy - every shortcut, plus widgets of your choosing, are dropped on the homescreen. You get a docked menu for the most commonly used apps, of course. The homescreen also supports a wallpaper carousel, so you can enjoy different beautiful wallpapers all the time.

There is a new Quick Card pane, the leftmost one. It's quite similar to Today's page in iOS. It contains different cards with relevant information - recent apps, step counter, notes, calendar events, the weather, and favorites, among others. You can configure what shows up here, or you can disable this altogether.

The notification drawer has a consolidated list of quick toggles, notifications, and a weather panel at the top that changes color and animation according to the weather. Thanks to MIUI 9 you will be able to respond to notifications (emails, SMS, IMs, among others) as they pop up on top of your screen without interrupting what's currently running.

The app switcher feels like it came out of iOS - apps are represented by appropriate thumbnails in the same manner, but there is an additional key for the Split Screen mode. MIUI 9 adds native support for multi-tasking via the new Split Screen feature. It allows you to launch two apps side-by-side. All native apps support it and, luckily, all third-party apps with support for any kind of split screen mode work flawlessly on MIUI 9 side-by-side view.

Dual Apps and dual spaces are here to stay. Dual Apps means you can have two instances of the same app on your device. This allows you to do things like have two WhatsApp accounts on the same phone, one for each SIM. You can enable dual-app functionality on almost every app.

Dual spaces lets you have two different workspaces on your device, each with its own set of apps, customizations, and image gallery, and you can enter a custom passcode or a different fingerprint to enter either space.

Themes are fully supported, and several are available out of the box. You can download more and change your wallpapers, lockscreen style, system icons, font, and sounds.

The new Smart Assistance is accessible from pretty much everywhere - the notification panel, the leftmost pane, or by swiping upwards anywhere on the homescreen. It can find anything from photos to text. It can search for content in your files, messages, notes, music, Drive, Dropbox, OneDrive, Contacts, Bookmarks, Mail, and others. Currently it's available in Chinese only, but hopefully Xiaomi will add more languages soon.

The Smart App Launcher uses the Smart Assistance services to recognize the content on your screen and it can launch an app based on that. It can open Maps if you are talking about going somewhere, or help you read more about an artist if you are reading an article on him/her.