The Xiaomi Mi 9 SE has a 5.97-inch display - that passes for small these days, with the tall aspect ratio and slim bezels allowing 6-inchers to fit in even more compact footprints. The Mi 9 SE's panel is a Super AMOLED one - Samsung-made, as Xiaomi is keen to point out in its specs pages. It's in a 19.5:9 aspect with a resolution of 2340x1080px for a pixel density of 432ppi. 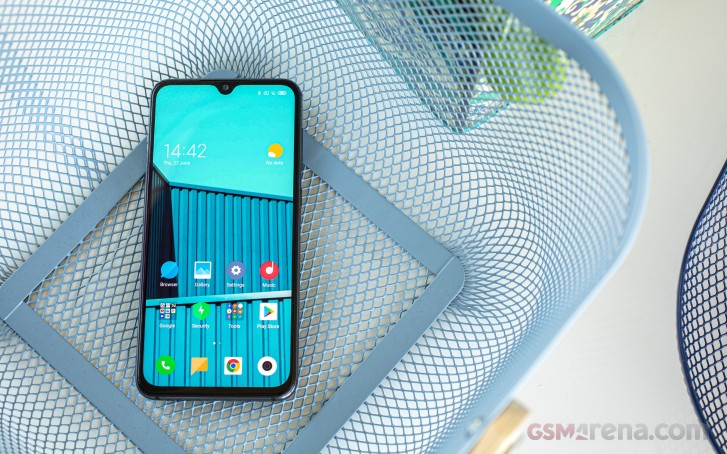 Xiaomi claims the 9 SE's display is capable of outputting 650nits of brightness, and in our testing, it nearly achieved that - we measured 638nits with auto brightness turned on. If you put the ambient light sensor to rest and adjust brightness manually, you'd get some 200nits less - both values are relatively typical for a good modern OLED display, and the entire Mi 9 family is in this ballpark. We measured a minimum brightness of 2.2nits, same as on the Mi 9T and a good value for using the phone in complete darkness.

The color settings are a bit misleading on the Mi 9 SE. You have one field where you can select between default, warm and cool modes, and then another area for 'contrast' which, however, alters colors considerably.

With the smallest screen among Mi 9s, the Mi 9 SE also has the smallest battery. Rated at 3,070mAh, the power pack is 3/4 the capacity of the one in the Mi 9T, and a few percents lower than the Mi 9 proper's.

In our testing, the Mi 9 SE did a respectable job with what it's got. We clocked 14:37h on our offline video-looping test and 25h of voice calls on a 3G network. The web browsing longevity is the least impressive, though at more than 10 hours, it's still a decent result. The standby efficiency didn't turn out particularly great which impacted the overall result, and the Mi 9 SE got an Endurance rating of 73 hours. 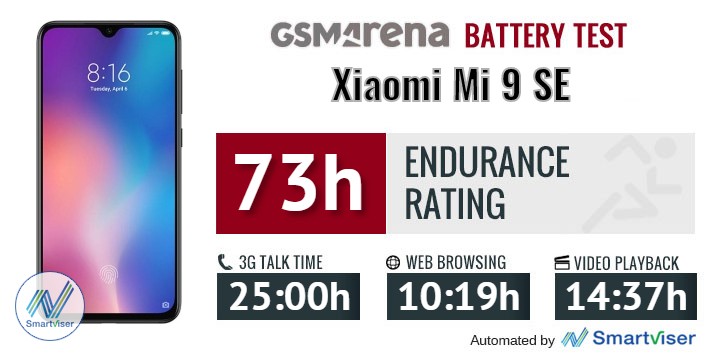 Our battery tests were automated thanks to SmartViser, using its viSerDevice app. The endurance rating above denotes how long a single battery charge will last you if you use the Xiaomi Mi 9SE for an hour each of telephony, web browsing, and video playback daily. We've established this usage pattern so that our battery results are comparable across devices in the most common day-to-day tasks. The battery testing procedure is described in detail in case you're interested in the nitty-gritty. You can check out our complete battery test table, where you can see how all of the smartphones we've tested will compare under your own typical use.

The Mi 9 SE supports Qualcomm QuickCharge 4+, meaning it's also compatible with the USB Power Delivery standard. The bundled adapter is rated at up to 18W and with it, the Mi 9 SE took 1:33h from flat to full. At the 30-minute mark, we were looking at a 47% charge. Even though it is a relatively small battery in the Mi 9 SE, both numbers are more than reasonable, and you'd have no trouble getting some juice in it quickly when in a pinch.

Testing the Mi 9 SE's loudspeaker ended up being a moderately unpleasant experience. No, no, it's not bad - on the contrary, it was just so loud. The single down-firing speaker easily earned an 'Excellent' rating, beating both the Mi9 and 9T and just about every other phone we've tested. It had no problems at this high volume producing rich and detailed sound, without any audible issues. We'd still like some more kick in the lows, but we realize that loud as it may be, the Mi 9 SE is still just a smartphone.

The Xiaomi Mi 9 SE had a nicely high volume with an active external amplifier and the excellent performance we’ve come to expect from smartphones these days.

The Mi 9 SE handled the trickier headphones run with no drop in loudness while getting less stereo crosstalk than its Mi 9T sibling, which we just reviewed. The channel separation is still only average, and there was a tiny bit of intermodulation distortion, but other than that its performance was as good as in the first part. A solid showing, overall.