Xiaomi is announcing the Mi Max 3 tomorrow, but that is not stopping Lin Bin from leaking the phone and spoiling the surprise. Yesterday he posted all the official renders of the phone and today he went further ahead and revealed the key specs of the device. The Mi Max 3 will have a Snapdragon 636 chipset and a 12 MP + 5 MP dual camera. 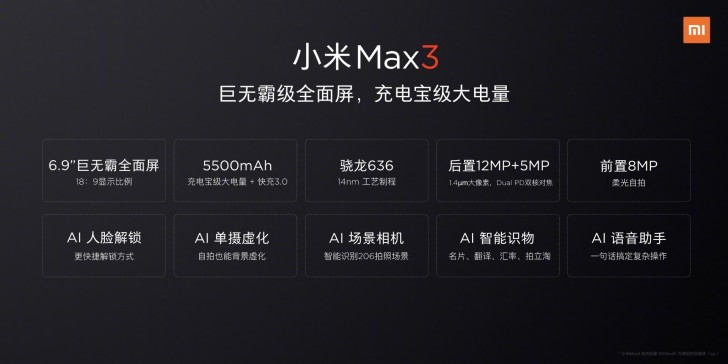 The 6.9” LCD panel was already teased by the company account on Weibo back in Monday. The post also revealed the battery size which will be the biggest in the series so far. Leaked photos accompanied the image, but with the Lin Bin post, now everything is official. The dual camera on the back is the same setup as the Redmi Note 5, while the selfie snapper will have 8 MP resolution.

The second row on the image reveals the Mi Max 3 will heavy on the AI. The trendy feature will be implemented in the Face Unlock. It will also learn throughout time how to accurately create a background blur when shooting with the camera. Speaking of taking pictures, the UI now reads and adapts to at least 206 different scenes and there is also an AI voice assistant. 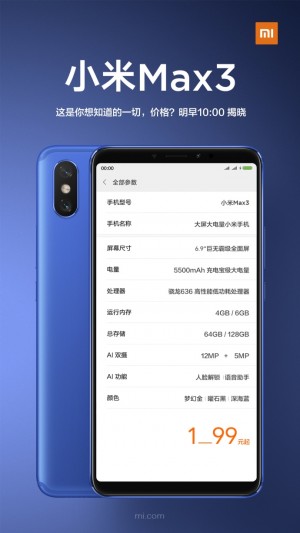 While Lin Bin is revealing one part of the specifications, the official Xiaomi account is announcing the rest - the Mi Max 3 will have 4/6 GB RAM and 64/128 GB storage, but does not reveal the configurations. The price is hinted as CNY1_99 and even if its CNY1999, the phone will be less than $300/€260.

An sd 660 would have been awesome but 636 should do the job pretty well as its a decent upgrade from 625 which lacked performance.

Finally, D-day for Mi Max fans. The wait has ended.