The Alcatel Idol X+ measures 140.4 x 69.1 x 7.9mm, which is just 1.6mm taller and 1mm wider than the Idol X, while managing to retain the same weight despite the larger battery.

The slim screen bezels also help the device remain manageable while offering plenty of screen real estate. You can use the device comfortably in one hand thanks to its 130g of weight.

As with the Idol X, Alcatel has taken design cues from numerous devices when it comes to the X+. The front nods at Google's Nexus 5, while the speaker grilles at the bottom look like a page out of Apple's book. The texture of the battery cover is reminiscent of the ASUS Zenbooks. Either way, the end result isn't bad and similarities to other devices should be taken as a compliment rather than a dig at the Idol X+.

The minimal gap between the LCD panel and the front glass results brings the image on the screen as close to your fingers as possible. Also, the slim side screen bezels make one-handed operation even easier.

The glossy back panel is not our favorite feature. The attractive underlying texture aside, it is very prone to fingerprints and has a surface that many manufacturers have moved away from in recent years for exactly that reason.

The capacitive keys below the display provide a nice contrast to the all-black front panel, while the physical power/lock and volume rocker buttons have good resistance and are solidly built.

Alcatel Idol X+ in the hand

With the Idol X+, Alcatel has also outed a fitness band called BoomBand aimed at capitalizing on the emerging trend of smart wearables that complement smartphones. By default, the band tracks your steps walked, telling you distance and calories burned. 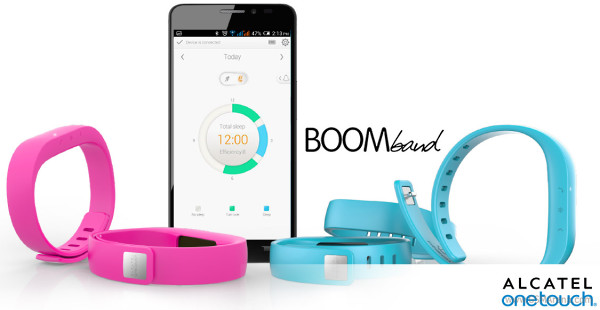 More advanced features include fitness goals, sleep tracking, alarms, anti-loss alerts, and incoming call notifications. Alcatel rates it for a maximum standby of 3-5 days. It's paired using the onboard BoomBand Life app, which we cover in more detail in the apps section.

The Idol X+ sports a bright white status LED to the left of the earpiece for notifications and such, alongside an assortment of sensors and the 2MP 1080p front-facer on the right.

On either side of the device are the two SIM card compartments, the volume rocker placed right below the one on the right.

One nice geeky touch is that the SIM slots have magnetically locked covers. But we can't help but raise our proverbial eyebrow at this solution. Being made out of metal, the covers have a slightly different finish than the otherwise plastic rim that runs around the phone so they stand out and not in the good way. Secondly, they easily detach and fall off when the back cover is removed. It's true, there aren't a lot of reasons to open the back panel in the first place as the battery is not removable, but still, these present a certain liability.

The top side has a 3.5mm audio jack and power/lock button, while the bottom side features the microUSB port, and a pair of iPhone-esque microphone grilles on either side.

Around back, the main attraction is the 13MP camera lens accompanied by an LED flash and a microphone.

The rear panel is made of slick glossy plastic that's very prone to fingerprints and it's also quite easy to scratch (so grab yourself some protection). The back panel would certainly look good on press shots - there's an underlying pattern that looks different depending how the light hit it, but as soon as you start using the phone, it turns into a smudgy mess.

The panel can be removed without the need for special tools, although doing so means the SIM card covers will fall off their hinges. So make sure you don't lose them.

A strange fact, the removable cover serves no real purpose - the 2,500mAh battery isn't user replaceable and there is no slot of any sort hidden under.

The back panel is user-removable, but the battery is not