The audio quality of the Curve 8520 is typical BlackBerry stuff. It's pretty good but not the best in class anymore.

The cut-off bass frequencies are as usually our main grudge against the audio output. It's either that RIM are trying to conceal a weakness of the supplied headset or they still can't find a way to get it right.

The rest of the readings are excellent with noise levels, dynamic range and stereo crosstalk particularly impressive. The distortions are also kept well within standards. All in all, you will be enjoying some great sound with BlackBerry Curve 8520.

When praise is due we aren't shy to lay it on thick and the Curve 8520 has more than decent audio output for a business handset. Now if we are to look at it as a music-dedicated handset for the keys on top then we would have to look at it differently, but let's not go there. 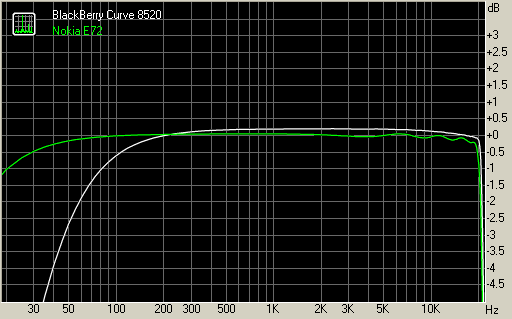 The BlackBerry Curve 8520 video player is another of its applications that manages to please.

With a simplified interface, fullscreen mode and long list of supported formats, it is more than most users will ever need.

The best part about the Curve video player is that it comes with DivX and XviD support, which allows you to watch your favorite videos without having to convert them. MPEG-4 and WMV are also on board of course but we guess they won't be needed as much.

All it takes to watch a movie on the Curve 8520 is upload it to the phone and start the video player - it doesn't get much simpler than that.

Knowing that the music player didn't receive any upgrade we didn't have any hope of seeing anything new in the image gallery. Its functionality is hardly too impressive but there aren't any major gaps either so it does quite well.

The gallery offers thumbnail and list view of the images and a feature we particularly enjoy. The 100% zoom shortcut when looking at a single picture gives you a quick and easy way to review photos in the finest detail possible. Further zoom steps are also available but why would anyone really need them?

The gallery is hardly too great of a looker

Quite naturally the photos can only be browsed in landscape mode. You can browse photos without returning to the gallery view which is also pretty convenient.

Overall, picture browsing, zooming and panning is borderline passable as there is quite a bit of lagging involved when dealing with larger photos. Yet, since larger photos are hardly likely to end up in the Curve 8520 memory given the 2MP camera, we won't make much fuss out of it.