We saw the impressive dynamic range of the Nokia Lumia 1020 but it also lacks a built-in HDR mode (out of the box). It does have automatic exposure bracketing but you'll have to merge the HDRs yourself. Still, let's see how each phone performed. 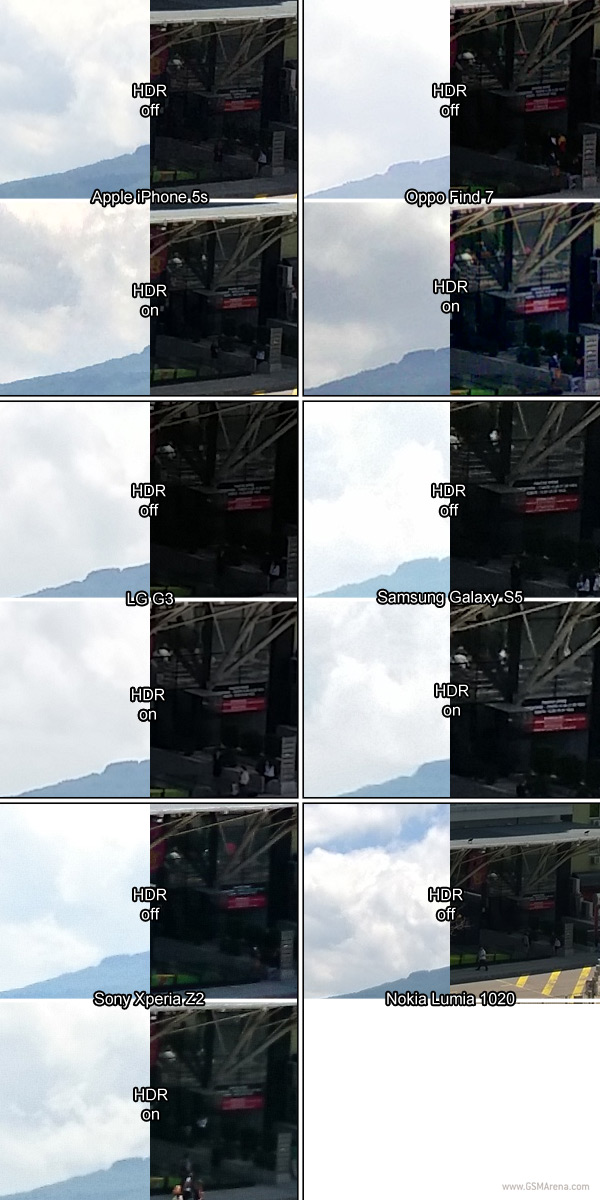 The Apple iPhone 5s has an automatic HDR mode that can save you the hassle of selecting the mode manually but it doesn't do that too much to begin with. It slightly recovers the highlights but doesn't touch the shadows.

The Oppo Find 7 meanwhile seems to offer noticeable improvements but if you look at the thumbnails below you'll notice that the effect turned up the saturation to cartoonish levels. This is the kind of over-the-top HDR many (us included) do not like.

The LG G3 has an auto-HDR mode like the iPhone but it did even less. It slightly lightened up the shadows but left the bright sky practically unchanged.

The Samsung Galaxy S5 developed more detail in the bright clouds with HDR on and it brightened up the shadows as well. The effect is stronger than on the LG G3 but is more balanced and doesn't go over the top like on the Find 7.

For the Sony Xperia Z2 we used the 8MP Superior Auto and 8MP Normal modes (it can't do HDR at full resolution). Its tendency to overexpose shots comes back to haunt the Xperia when it's shooting bright clouds. The effect of HDR in the shadows is minimal but it does help the render the clouds a bit better. A bit.

Finally, the Nokia Lumia 1020 handles the sunlit clouds with ease and even the shadows look great. Since this is a non-HDR shot colors look natural too.

We encourage you to view the full size samples as the effect of HDR is best felt when viewing the whole photo. Still, even the thumbnails should give you an inkling of what to expect.

All six phones have sweep panorama modes and they use them with varying degrees of success. Note that we didn't do the full sweep, some phones offer to do the full 360° but we shot the same arc with all phones (around 180°).

The LG G3 produced a whopping 50MP photo and the stitching is spot on. Even the differences between brighter and darker areas didn't faze the G3.

Despite having only half the raw pixels, the Apple iPhone 5s produced a panorama close to the Galaxy S5 in size (19MP). The stitching is spotless and the transitions between bright and dark areas are handled well.

The Samsung Galaxy S5 produced a smaller image, around 25MP. The difference in resolution is noticeable but the stitching looks good and there are no unevenness in exposure.

The Oppo Find 7 produced a 19MP image and there were some issues with stitching but nothing major.

Despite having the highest count of raw pixels to play with, the Nokia Lumia 1020 shot the second smallest panorama at 12MP. It was also one of the hardest to snap a photo with - instead of a smooth sweep, you have to aim for white "targets" and hold the phone still for as much as 7-8 seconds at a time. Also, the vertical FoV is pretty limited.

Finally, the Sony Xperia Z2 did the worst in this department - the vertical resolution of 1,080 clearly shows the panorama was created from recorded video (for a final shot of less than 4MP shot) and the stitching is pretty bad. Also, if you don't complete the sweep the phone leaves the remaining area a solid grey color (we've cropped it out).