The Ascend Mate7 is probably a logical next step for Huawei after a couple of solid midrange attempts in the same genre. The Mate7 will mix with the big boys in a niche, which has only been getting busier and has a prominent newcomer this season.

The premium looks of the Huawei phablet will get enough attention and the build quality will live up to the resulting expectations. That's one important box duly checked. Huawei even probably over-delivered here, considering theirs is a much bigger screen - and battery - in the same space as the iPhone 6 Plus. The Note 4 goes there too. 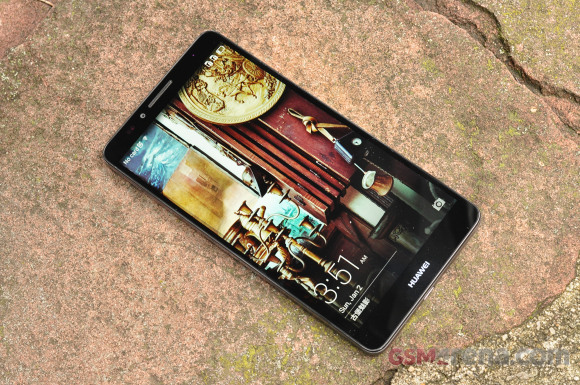 The company indeed succeeded in manufacturing a high-end device made of aluminum alloy, with good looks and excellent handling despite its massive footprint. What we're not sure about is the resemblance to the HTC One Max. Parts of the design are nearly identical and that may be interpreted the wrong way. We'll say it again though, whatever the design inspiration, the Mate7 looks and feels amazing and the build is impressive.

The fingerprint scanner was a very pleasant surprise. More than just a line on the spec sheet, it works better than the Samsung solution and can do more or less the same as what you would on an iPhone or a Galaxy handset. The Mate7's fingerprint scanner is very quick and comfortable to use for things like screen unlock, securing content, limiting access to selected app and authorizing payments.

The display may not be a QHD unit but the pixel density is more than Retina-grade, with sharp images, great contrast, color reproduction and sunlight legibility. Even better, it can work with gloves if need be.

The new Kirin 925 chipset is reasonably fast, but not Snapdragon 801 fast - and there's 805 now, with 810 around the corner. Worse still, while the CPU performance is solid, the Mali-T628 GPU delivers underwhelming results and will soon be kicked out of the major league. At least you get 3GB of RAM, which will put heavy multitaskers at ease. Something to watch out for though - the 16GB version comes with "only" 2 gigs of RAM.

The 13MP rear camera takes great stills, but videos don't go higher than 1080p at 30fps, which isn't competitive enough in this price bracket - a disadvantage only an iPhone can get away with. The battery capacity is a whopping 4100mAh but, but poor standby battery performance (probably due to inadequate software optimizations) didn't allow the Mate7 to match the battery ratings of the iPhone 6 Plus or the Galaxy Note 4.

Now, let's summarize our key test findings for you.

Like we said, Huawei has a solid foundation to build on and hopes to succeed in the premium segment - but they should very well know what they're up against. The new Apple iPhone 6 Plus is obviously one of the targets - a bold statement never mind Apple are newcomers in this niche. The Cupertino phablet is way more expensive, offers limited storage and a smaller display in the same footprint - but at the end of the day, iPhone users are always driven by less tangible factors. Of course, things like the excellent camera with optical stabilization, the App Store and seamless integration with other Apple devices via iCloud and Handoff cannot be underplayed.

The Samsung Galaxy Note 4 has just hit the shelves and is genuine bestseller stuff. It offers a superior 5.7" QHD Super AMOLED display, a better Snapdragon 805 chipset, better camera and richer software package with deep S-Pen stylus integration. It costs a good €200 over the Mate7 though.

The Lenovo Vibe Z2 Pro matches both the screen size and price tag of the Huawei Ascend Mate7. Its display is even better at QHD resolution, while the snappy Snapdragon 801 is in charge. The Vibe Z2 Pro also features an aluminum unibody, comes with more capable camera with optical stabilization and 4K video recording. If you are looking for an alternative to the Mate7 with even better specs, the Lenovo Vibe Z2 Pro is definitely the one the Mate7 should be wary of. You would be missing the fingerprint bandwagon.

Another couple of QHD devices, although with smaller 5.5" displays, the Oppo Find 7 and the LG G3 are both powered by Snapdragon 801 chipsets, offer great cameras, and feature-rich software packages. They both cost around the same as a Huawei Ascend Mate7, which puts them on the potential buyer's shortlist.

Finally, if you are looking for more affordable options, the HTC One Max may probably get the nod. If nothing else, it's where the Ascend Mate7 surely took some inspiration from. The One Max isn't among the company's most successful devices, but still reasonably relevant with a 1080p 5.9" screen, a Snapdragon 600 chipset, Boom Sound stereo speakers and a fingerprint scanner - admittedly inferior to Huawei's. Perhaps a better idea - and still cheaper than the Mate7 - the Nokia Lumia 1520 only misses the fingerprint scanner of the Mate7 but more than makes up for it with its PureView camera.

OK, clearly not a free ride for the Mate7 in the premium phablet space but it won't give up without a fight. The Ascend Mate7 looks the part (hat-tip to HTC) and is more than reasonably equipped for survival. Huawei's ambitions are certainly higher than that though and they look capable of matching them with skill and resources.