The Ascend Mate7's gallery app has been updated with a new Timeline view, which sorts your images by the date you've taken them. It defaults to the Timeline view, but you can opt for the standard Album view with all of your images sorted in different albums.

The Gallery app • Viewing an image

You can also go into a more capable editor with options for light and exposure adjustments (so you can bring out the shadows or the highlights), filters and beauty enhancements (which detects faces automatically).

When it came to playing videos, the Huawei Ascend Mate7 default player does a good job supporting every common video codec, but unfortunately it lacks support for AC3 audio.

We couldn't find a way to load subtitles, but Dolby Mobile enhancement is supported.

The Now Playing screen is pretty standard, it offers album art and lyrics. You can toggle Dolby Mobile by tapping the icon on the top left, but there are no additional equalizer presets or custom equalizer settings.

The Huawei Ascend Mate7 has a built-in FM receiver. It can play through the headset or the loudspeaker, but you'll need to have the headset plugged in as it serves as an antenna. We were disappointed not to find RDS support - you'll have to name your radio stations by hand.

The Huawei Ascend Mate7 did excellently in the active external audio test, posting great scores and showing no weaknesses to its performance. The only thing to potentially frown at is its sub-par volume, but quality-wise it's right up with there with the best.

Impressively enough, plugging in a pair of headphones causes a very minor increase in stereo crosstalk - in this scenario the Ascend Mate7 ranks even better compared to the competition, which often see more degradation. Alas, the volume is below average here too, so we can't really say it's the best phablet for audio playback, but we can certainly promise you it will play every track the way its authors meant it to sound. 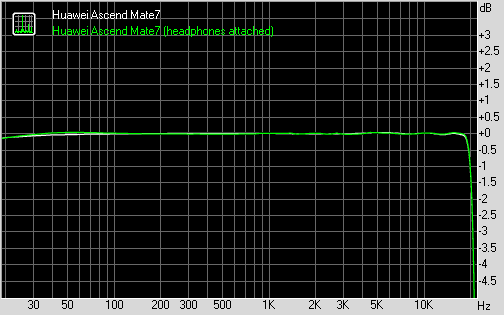