The image gallery does a great job

Huawei Ascend P6 comes with an updated Jelly Bean image gallery. The Default view of the gallery is Albums, which is what we're used to seeing - it lists all folders in the phone as stacks of photos.

Besides Album view, you also get three additional tabs - Locations (photos are grouped based on where they were taken), Times (grouped by when they were taken), and People (if the photos have tagged faces in them).

The settings menu lets you do simple edits to a photo (rotation only) or go into a more capable editor with a lot more options. The editor offers light adjustments (so you can bring out the shadows or the highlights), effects, color styles, red eye correction, straightening a photo, sharpening and face glow (which detects faces automatically). Most of these options have a slider that lets you fine-tune the intensity of the effect.

An app called Movie Studio handles editing videos and it's quite feature-rich. You can add multiple videos to the timeline and trim their start and end points, you can add titles and effects (including transition effects), add music and there are multiple options available when you decide to export the video (resolution, quality, etc.).

The Ascend P6 doesn't have much of a video player - you just open videos from the gallery or the file manager and that's that. On the up side, it handled all videos we threw at it - all the way up to 1080p, DivX, XviD, MKV and even WMV.

The equalizer presets are available only when headphones are plugged in

Subtitles are supported, you just need to name the subtitle file the same as the video, though only Latin fonts will be displayed properly.

The 4.7" HD display is great for watching movies on the go. In case you need more functionality, you can also download a third-party movie player.

The Huawei Ascend P6 comes with a brand new music player designed by Huawei. It offers four default playlists dedicated to your mood, but you'll have to assign songs to the mood playlists manually. There are also All songs, Playlists, Albums, Artist and Folders views.

The Now Playing screen is pretty standard, it offers album art and lyrics.

The Music app offers non-customizable equalizer presets only when you plug in a pair of headphones. You can get to the equalizer with a tap on the Dolby Mobile key at the top of the Now Playing screen. In case you are using the loudspeaker, the Dolby logo will only toggle Dolby Mobile on and off.

The Huawei Ascend P6 has a built-in FM receiver. It can play through the headset or the loudspeaker, but you'll need to have the headset plugged in as it serves as an antenna. We were disappointed not to find RDS - radio stations need to be named by hand.

Unfortunately it turned out that audio quality was one of the things Huawei had to sacrifice in order to fit the Ascend P6 in such a slender chassis. The smartphone couldn't even complete the first part of our traditional audio quality test due to its poor output.

There weren't such issues when we plugged in a pair of headphones, but the output wasn't particularly great either. Frequency response and distortion levels were very good, but the signal-to-noise score and the dynamic range were somewhat low, while the stereo crosstalk was only average. To make matters worse, the Ascend P6 is one of the quietest smartphones we have tested to date. 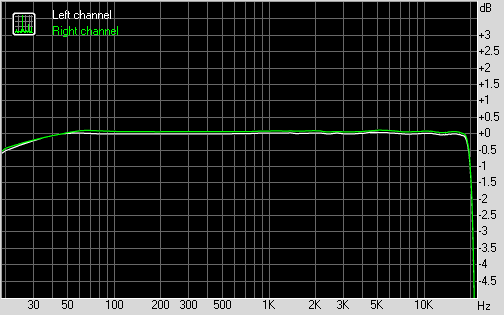