It's DSLR-like portraits what the whole dual camera thing is all about, at least a large part of the reason. You can't really fully emulate in software what fast glass and large sensors can do naturally, but for casual snaps we've almost gotten there. Both the iPhone 8 Plus and the Galaxy Note8 can do a reasonable job of subject isolation and background blur. However, you need to be aware of the limitations and realize that certain subjects and backgrounds will work better than others, and the relative distances between camera, subject, and background will have an effect as well (just like with a DSLR, for that matter).

All that said, there are differences in the approaches that the two cameras take. The iPhone's algorithm comes to terms with the fact that it probably won't be able to isolate every strand of hair, and is already applying some blur before around your head, so the transition between subject and background is a little less abrupt and imperfections are less prominent. It does make sense too - after all people's heads are three-dimensional objects and if your eyes are in focus, the back of your head shouldn't be.

The Note8, on the other hand, attempts to keep the entire subject (person's head) in focus, and blunders in figuring out what's subject and what's background are more readily apparent.

You can also take selfies with the rear cam in Portrait mode (okay, Live focus on the Note). You'd have a slightly easier job framing it on the Note, as its field of view is a little wider. The iPhone can barely fit a head in the frame at arm's length, but it can be done.

The iPhone has a Portrait Lighting feature to enhance the usefulness of its portrait mode. As the name suggests, it can apply different effects to simulate certain lighting conditions.

A neat feature on the Note8 is that you can adjust the strength of the background blur both as you're taking the shot, and after the fact, in the gallery. You can then save a number of shots with a varying amount of blur. On the flipside, the iPhone saves a regular photo alongside the processed portrait one.

You can also try and use the portrait modes for isolating subjects other than people. The iPhone might be more reluctant to give you a decent preview, but will do the job nonetheless. Here are a few examples.

With all the dual-cam portrait modes, it's easy to forget that there are selfie cameras on these phones. The Note8 has the upper hand in the specsheet - its 8MP shooter has large(-ish) 1.22µm pixels, and a wide-angle 25mm-equiv. lens with a large f/1.7 aperture. The iPhone 8 Plus offers a 7MP sensor with 1.0µm pixels and a rather limiting lens with a 32mm-equiv. focal length and f/2.2 aperture. Oh, the Note8's front facing cam has autofocus, and the iPhone's doesn't.

Thanks to its much longer lens, the iPhone will produce a comparable detail on a per-pixel level, as you tend to be shooting selfies from the same distance. That, however, is also the iPhone's main disadvantage - group selfies are pretty much a no-go. 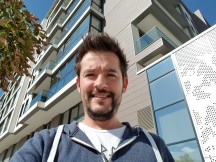 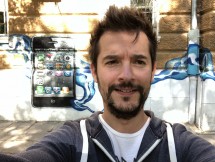 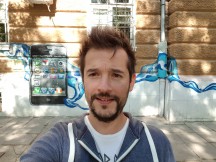 The Note's photos have a bit of an edge in dynamic range and exposures are a little brighter. The iPhone tends to produce a little warm skin tones, to the Note's more neutral representation. Each camera has its own character, but both will do fine for social sharing, which is just about what they're here for. 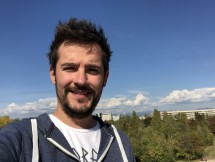 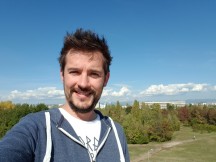 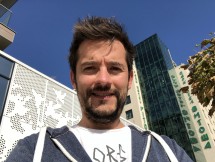