The LG G2 is coming into this fight as the crowd's favorite (on paper, at least) - it has Optical Image Stabilization (OIS) and 1080p @ 60fps video capture.

Normally, the LG G2 shoots 1080p videos at 30 frames per second and they look smooth. Their bitrate is 20Mbps overall, with 156Kbps dedicated to 48kHz stereo audio. If you pick the 1080p @ 60fps mode, the overall bitrate jumps to 30Mbps for double the information it needs to record. Well, that's not exactly the case as the framerate is closer to 58fps most of the time. Still, it's enough for videos to be smooth, but may cause some syncing issues on 60fps displays. If you are proficient in video editing enough, you can potentially take these videos and slow them down on your computer, which would make impressive slow-mo 1080p footage.

We shot one video with each phone from a tripod then a video with both at the same time, holding them in hand. There's also a 60fps sample from the LG G2, but no matching Galaxy S4 sample obviously.

The higher bitrate of the LG G2 would make you think that it will score an easy victory here but that isn't the case, as it turns out. The LG G2 videos have the contrast much too high, making them look overexposed (but the shadows aren't well developed). Also, in terms of overall detail we've seen better 1080p videos, especially at such a high bitrate.

Taking the phone in the hand didn't affect the image quality, as can be expected.

The 60fps video mode, however, proved to be a disappointment as turning it on, caused a drop in the perceived resolution - the letters all but fade out and the diagonal line becomes jaggy. It's similar to when the first 1080p video phones hit - they did better at the tried and true 720p, the LG G2 is better at 30fps than the new 60fps.

Contrast aside, the LG G2 videos suffer from an overly sensitive continuous autofocus and auto exposure.

The Samsung Galaxy S4 packs more details in its videos despite the lower framerate. Part of that is surely due to the better exposure and contrast settings. Both phones use the same compression - AVC High@4.0, CABAC 1 Reference frame - so we can't attribute the Galaxy S4 advantage to more efficient compression. The lower bitrate however allows for smaller file sizes, something which the G2 clearly has to watch out for with its limited amount of built-in storage.

The warmer white balance we saw in the stills is in place here too. 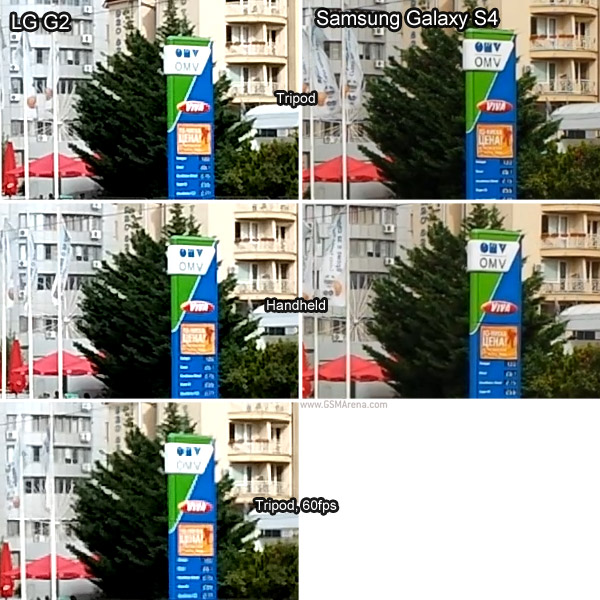 Not having an OIS system is the one thing that hurts the Galaxy S4 videos - they have the handheld look that reminds us of old timey home videos, while the LG G2 stabilization makes videos more appealing. We'll see how its stabilization holds up when we test it against the HTC One, which was the first Android to have OIS.

The handheld videos we combined into a single video to make the advantage of OIS more apparent. This video is also good at showing just how much different are the exposure and contrast on both videos.

You can also download a 1080p @ 60fps video form the LG G2 if you're curious about that (YouTube doesn't support 60fps).

The Samsung Galaxy S4 comes up with videos, which have more fine detail, better contrast and smaller file sizes.

But the LG G2 optical stabilization makes for nicer, more fluid videos, when the shakiness of the Galaxy S4 videos can clearly take away from the amount of perceived detail unless you really rest the Samsung smartphone on something (as we did with our tripod) to offset this disadvantage.

Still, we'll surely be on the lookout for a future fix of the exposure and contrast tuning and the overeager continuous autofocus of the LG G2.

The 1080p@60fps turned out a flop and we doubt the company can do anything for it post-release. Its presence only makes the job of the marketing people easier, but with this lesser quality, we doubt it will see much real-life use.

We took a series of photos in low light with both phones. We tried just shooting on normal with flash disabled, normal with flash enabled and in night mode (night mode disables the flash automatically). Below you'll find a crop that shows the best and worst shot of each group.

The photos from the LG G2 are almost the same on normal without flash and on night mode. There is an important difference though and that is night mode shots were more consistent, while several normal mode shots turned out blurry despite the optical image stabilization of the camera.

Anyway, photos look very soft but the G2 processing algorithm has removed almost all of the noise and images look passable if you don't plan on viewing them at full resolution.

The Samsung Galaxy S4 has automatic night detection, which enables night mode automatically. We disabled that to see if there's a difference between normal and night mode. And there is - the normal mode shots look dark and very grainy, while night mode shots are brighter and there's less noise. There's not a lot more detail but night mode photos do look better. Both modes are fairly consistent when it comes to image quality.

We tested the phones with flash off as it won't do much difference for faraway subjects and landscapes.

Flash photography on phones is really for when you're shooting something pretty close up. The Galaxy S4 proved to have a slightly more powerful flash that filled our test scene more evenly. This also gave it a noticeable advantage in terms of detail - if your hands are steady, photos with flash turn out pretty good (but even the flash doesn't help the S4 inscrease the shutter speed enough to eliminate handshake issues).

The weaker flash on the LG G2 didn't help it out a ton - photos do come out brighter, but they don't have that much more detail. The G2 does perform more consistently thanks to the image stabilization and it has slightly more accurate colors with the flash on, the Galaxy S4 photos have a dark yellow tint to them. 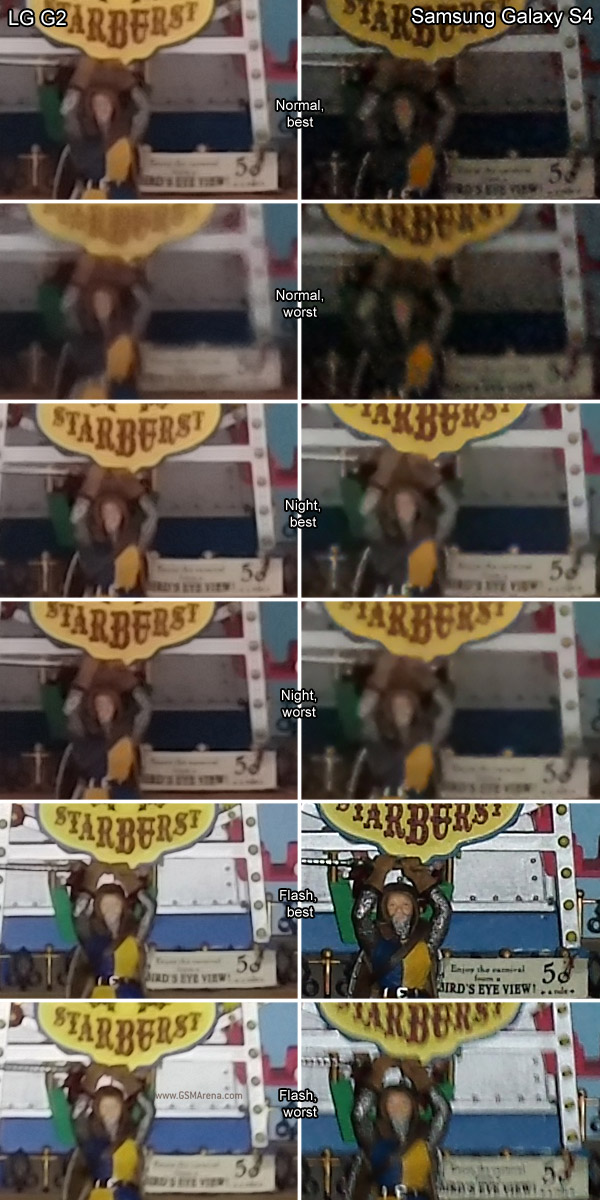 We also snapped a few photos outside after the sun came down.

Thanks to its Optical Image Stabilization, the LG G2 has the upper hand when the flash is off - depending on what photos you'll be taking, this might be the most important scenario. The Samsung Galaxy S4 avoided defeat by performing better with the flash on.