The Sony Xperia Z2's camera has the wider field of view (FoV) when using the entire frame, and while the Superior auto mode crops photos to 16:9 aspect ratio, the FOV still remains wider. 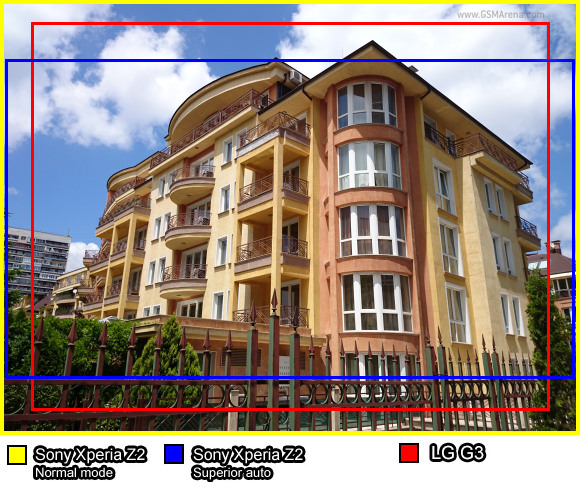 Superior Auto takes the 20.7MP frame from the Sony sensor, crops it to 16:9 and downscales the result to 8MP. Conveniently, that's just the resolution of a UHD TV so the photos will fit perfectly. The mode does some special post-processing along the way, which improves what are otherwise disappointing results at full resolution in Normal mode.

The LG G3 is resolving the small type - you can clearly read the word Motion. You can spot some oversharpening artifacts in that area, but it's not something you'll notice unless you view the image at 100%.

Color-wise, the two cameras are very accurate, although when looking at side-by-side samples, the Xperia Z2 has a slightly more neutral color tone that we liked better than the LG's warmer tint. The Z2's samples looked the more natural of the two.

The resolved dynamic range was slightly in the favor of the Sony Xperia Z2, but contrast goes in favor of the LG G3.

The 8MP Superior Auto shots from the Sony Xperia Z2 look noticeably sharper but the lower resolution does cause some loss in detail.

This crop also has the three primary colors visible - Red, Blue and Green. Neither phone hits the mark with the rendering - the contrast are a bit too much in the LG G3 photo and a bit too little in the Xperia Z2 Normal mode photo. The Superior auto mode seems to be closest to the truth. 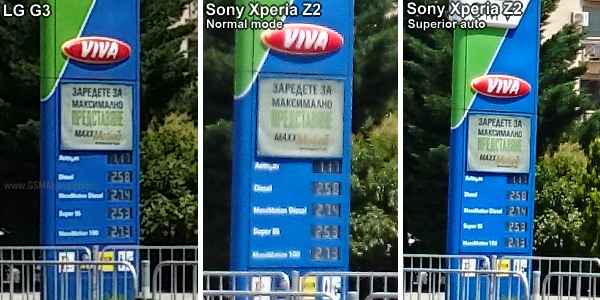 The Sony Xperia Z2 struggles with foliage. The grey roof in the center of the image also shows a clear oversharpening halo. The Sony Xperia Z2 in Superior auto renders the tree better than Normal mode though not better than the LG G3. The fire escape in the background also improves with Superior Auto though again not enough to beat the G3. 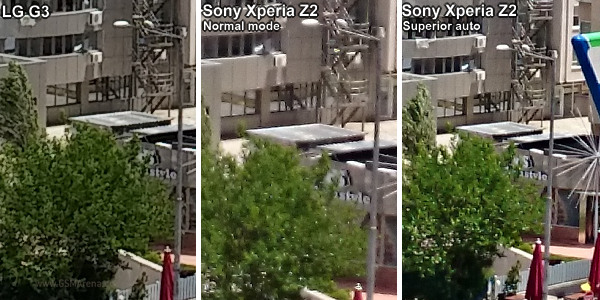 Here go the full res samples, if you feel like performing your own comparisons.

When it comes to HDR, both devices tell a much different story. The dynamic range gets higher and you get to keep the detail and get more in the shadows. The Sony Xperia Z2 is capable of taking HDR shots only in 8MP (or below) and it is more conservative on the expansion of the dynamic range mostly because it resolves more than the LG G3 in the first place. On the other hand, the lower dynamic range on the G3 gets insanely high in the HDR mode bringing out more detail from the shadows but making the shots look quite unnatural.

We moved to a dark room to try the low-light performance of both phones. This is the Xperia Z2's time to shine - it has a wider f/2.0 aperture and a larger 1/2.3" sensor, compared to LG G3's f/2.4 lens and 1/3" sensor. The super sampling performed by Superior Auto will also be of great help.

The first test is with the flash off. The Sony Xperia Z2 photos were taken at 1/32s shutter speed. There is lots of noise and very little to none effort for noise reduction. The LG G3 chose to shoot at 1/12s. It has a better noise reduction, it manages to keep lots of detail and the white balance looks more natural. 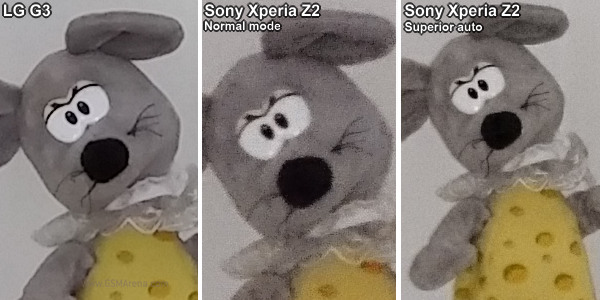 Next, we enabled the LED flashes (which only work at relatively short distances) and took more photos. The camera samples of both shooters have clear traces of camera shake. The Xperia Z2 retained its shutter speed but dropped the ISO from 800 down to 500, capturing a better level of detail. 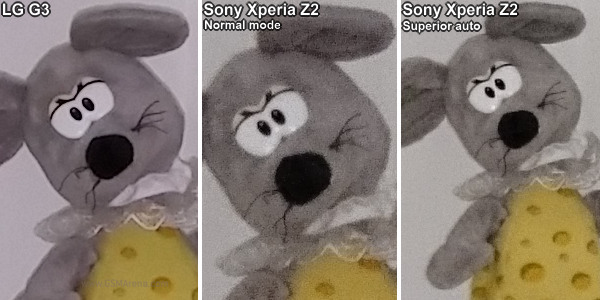 The LG G3 features a dual-tone flash, which is meant to produce more natural white balance in flash photography as the color of the flash output changes to match the ambient light of the scene.

With the flash on, the G3 shot at half the ISO, but also at a slower shutter speed at 1/16s. While the produced images once again offer more detail and little noise, the color temperature of the shots of the G3 now leans to red, which means that the true tone flash doesn't really do what it's supposed to.

Finally, we took both phones outside again to test their panorama capabilities. The LG G3 offers 180-degree pano shots and can snap those in both portrait and landscape modes. If you opt for the portrait orientation you'll get bigger field of view and higher resolution - about 20,000 x 4,050 compared to 20,000 x 2,250 px in landscape. The quality is great, and the stitching is near perfect.

Sony Xperia Z2, just like the rest of the Xperia lineup, is capable of snapping panoramas at the measly resolution of 4,912 x 1,080 pixels. These also add up for 180-degree view and the portrait orientation does offer bigger field of view, but the quality is just awful. To make things even worse, of you decide to end the shooting process before reaching the end of the panorama slider, you'll also get the same resolution image completed with gray space. Not good, Sony, not good at all!

Also, check out our Photo comparison tool that pits the two phones against each other.

Both phones offer some playful effects. The Xperia Z2 can overlay an imaginary 3D world over the photo with the AR effect (at a meager 1080p resolution) or use the GPS and compass to overlay info about your surroundings whit Info-eye. It has a dedicated Vine mode too. You can also stream content from your camera straight to YouTube.

LG has a simpler interface, but still offers the dual-shot mode. It does have the nifty magic focus feature that lets you choose an object to focus on after you take the picture. It requires some setup and a steady hand, however.

Winner: LG G3. Although the dynamic range and the white balance weren't as good as the Xperia Z2, the daylight shots still were superior. It also resolves more detail on the low-light shots no matter if you are using the LED flash or not. And the true-tone flash eventually allows for natural flash shots.