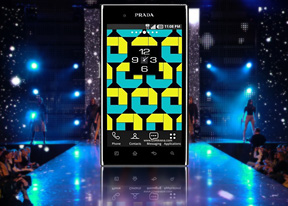 The Prada Phone by LG 3.0 comes in a black faux leather box, with soft suede padding on the inside for that extra touch of luxury.

From the inside and out the box of the LG Prada 3.0 screams quality.

Inside, we find a standard set of accessories. The modular USB cable to be used with a wall charger is gaining popularity. A stylish set of Prada-branded headphones is the only thing that sets the package apart.

LG and Prada haven't bundled any more accessories. There's no carrying pouch, an MHL cable, or even a microSD card. Various accessories are sold separately, including a Prada branded docking cradle, a Bluetooth headset and a range of carrying cases.

At 127.5 x 69 x 8.5mm, this is by no means a small device. The Prada phone holds itself with grace and confidence. Some people may find single-handed use problematic but overall, it's quite manageable.

The LG Prada 3.0 is built for a select few but its minimalist but powerful styling may be appreciated by a wider audience. The phone seeks to set itself apart from the Optimus crowd and does that rather tastefully.

And the good looks don't come at the expense of solidity. There's a reassuring heft to the LG Prada in the hand. The handset is stylishly slim, with little screen bezel. The Prada outfit really looks tailored to the measurements of the phone.

Looks can be deceptive. Although the body frame appears to be made of metal, it's actually plastic. It's the awesomely good paint job that makes a great impression. The all plastic build however keeps the weight at the acceptable 138 grams.

Up front, the 4.3" NOVA display has a resolution of 480 x 800 pixels and 217ppi pixel density. The first time we saw a NOVA display in action was on the LG Black. The 700 nits of brightness did leave a nice impression, but the latest Prada phone is raising the bid to 800.

This is by no means the brightest display in the market, some Nokia screens are already pushing above 1,000 nits. Overall though, the Nova screen on the Prada phone is well above the LCD average. It has more than enough brightness to make up for the not so deep blacks and as a result enjoys commendable contrast ratio. Sunlight legibility is good at medium and high brightness levels.

A Super AMOLED Plus screen could've easily gotten more punch out of the black-and-white color theme, but we're quite happy with what the NOVA display can offer both indoors and outdoors. The WVGA resolution gets stretched a little thin on a 4.3" diagonal but the mostly monochrome interface does well to camouflage the (d)effect.

Above the screen, we find proximity and light sensors, a 1.3MP front-facing camera for video calling and the PRADA logo proudly letting everyone know what they're dealing with.

The opposite end of the LG Prada's front has the four standard Android buttons in capacitive fashion. From left to right they are Menu, Home, Back and Search.

LG Prada 3.0's top side is a busy place. Every port of the phone and almost all buttons are located here. The power/sleep button glows when you unlock the device, but doesn't do so on a pending notification.

The other button on top is a shutter key, which hardly makes any sense. And if you thought the location is the worst thing that could happen to it, wait for this. It won't launch the camera when the screen is locked. Not to mention, there's no half press. On the other hand, both buttons are easy to locate by touch and solid on press. They're a pretty nice design accent too.

In-between them resides the microUSB port, which has an even greater looking sliding cover with the same brushed metal finish. Finally, on the far left side, is the standard 3.5mm headphone jack.

The buttons and connectivity port are strong design accents

The bottom of the Prada features only a microphone. Two studs in each corner mirror the steel buttons on the opposite end.

The volume keys are located on the left side of the LG Prada 3.0. The little plastic knobs are somewhat inconsistent with the styling of the rest of the controls.

The right side of the phone is clean and keeps to the minimalist look of the bottom.

The volume rocker • The buttonless right hand side.

The back of the phone, as usual, features the 8MP camera lens and a LED flash, set within a brushed aluminum plate. There's another Prada label, and an LG logo for a change, which is not nearly as conspicuous. The single speaker grille is in the bottom left corner.

The 8MP camera • The Saffiano pattern finish of the back cover

Maybe they could've done without a Prada logo at the back because the entire battery cover screams Prada to those who have the ear for it. It has the apparently famous Saffiano pattern, which - no less apparently - is all Italian to us.

Anyway, what's more important is that the leather-like pattern doesn't translate too well into plastic. That's one aspect of the Prada phone's design we're not so sure about aesthetically. On the practical side, it provides a really nice grip.

The Prada logo on the back • Speaker grill and LG logo

Removing the back cover reveals a microSD card slot, a SIM card compartment and a 1540 mAh Li-Ion battery, which LG claim is good for 330 hours of standby. You should get 5h of talks in a 3G network, but unfortunately we can't confirm those claims because of the short time we got with the LG Prada 3.0.

The solid build and strong design language will probably win this phone lots of fans beyond the fashion-conscious crowd. We liked the subtle, but strong accents and the stately elegance of a 4.3" Android smartphone that means business. It takes a real connoisseur though to appreciate the Saffiano back. Maybe that's why we didn't. .

The Prada phone by LG 3.0 has a trustworthy build and a reassuring feel in hand. We think it does just fine without metal on the body. We just couldn't help but wonder what an AMOLED screen might've been like. Now, let's hope the Prada phone won't leave us wanting more in the software department.