The Moto Z3 has a brand new display: a 6.01-inch Super AMOLED screen with a taller 18:9 aspect ratio. Motorola is switching from its P-OLED displays to brighter Samsung displays. Although late to the party, Motorola finally managed to minimize the bezels in the Moto Z's chassis by replacing the aging 5.5-inch 16:9 display with this taller one.

We really enjoy how the Moto Z3 looks compared to its predecessors. The 5.5-inch display gave the Z and Z2 really large bezels that quickly became outdated when the trend fully shifted towards tall displays in 2017. As for resolution, Motorola decided to keep the resolution at Full HD+ (1080 x 2160 px). 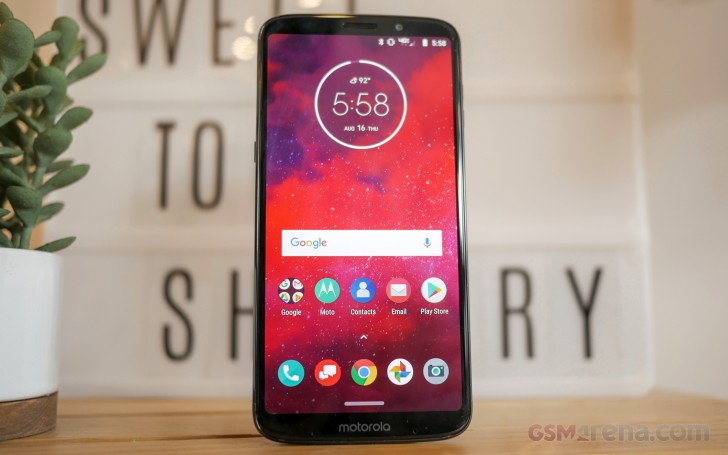 As a result, the pixel density of the Moto Z3 is 25% lower than the Moto Z2 Force, which had QHD resolution. That reduction in ppi is not a dealbreaker by any means. If anything, it would help bump performance and lengthen battery endurance.

Colors are generally pleasant on the Moto Z3. In the standard "Vibrant" mode, colors are slightly oversaturated for the most pleasing viewing effect. Even so, colors are just vibrant enough without being overbearing. In the default viewing mode, we saw an average deltaE of 5.7 with a max deltaE of 8 - greens and reds are slightly dark while whites were a little cool (blueish).

The most accurate color mode was the "Standard" after we moved the color temperature slider down to "Warm". In this mode, we saw a better average deltaE of 4.1 despite the much higher max deltaE of 10.6 due to reds looking a bit dark. We'd trust this display to edit photos with coloring in mind. 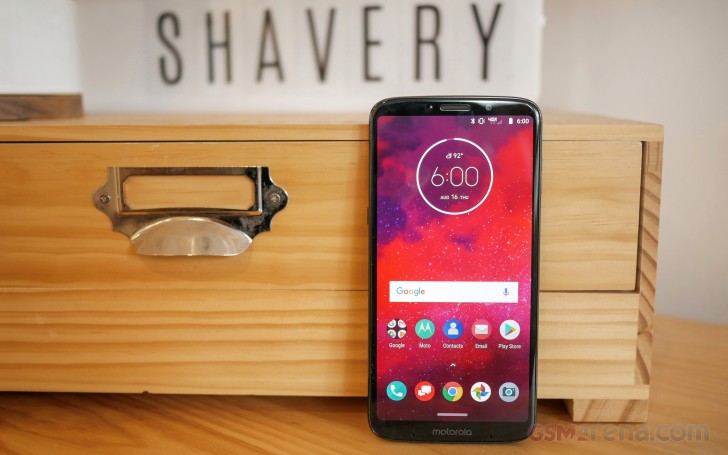 There is no way to fine-tune color temperature, but there is a slider that lets you choose between Warm, Neutral, and Cool. Vibrant + Warm yielded the best-looking colors with mostly accurate whites while Standard + Warm yielded the most accurate color mode on the device.

Considering the price point of the Z3, this is a great display with excellent color reproduction and ample brightness for viewing outside.

The Moto Z3 has a 3,000 mAh battery. By contrast, the Moto Z2 Force had a smaller 2.750 mAh battery. Even though this display is lower-res, its still a larger display. So even if the display was more efficient, the greater surface area might outweigh any added efficiency.

The Moto Z3 did surprisingly better than the Z2. For starters, the call time of 21:02h was several hours improved over the Z2. Meanwhile, our browsing test endured about one hour longer than the Z2: it got 10:49h. Finally, video playback saw a drop but still came up strong at 15:08h. The overall score is 86h, which is quite good for a device with a 3,000 mAh battery.

The Moto Z3 uses Motorola's TurboPower Charging - which Motorola's trademarked version of USB- Power Delivery. The included power brick supports 5V @ 3A/ 9V@ 1.6A/ and 12V @ 1.2A. We appreciate that the Moto Z3 supports both Qualcomm Quick Charge or USB-PD which makes the phone more accessible to quick top-ups with different kinds of power banks and power bricks.

Using the TurboPower OEM charger to recharge the Z3 from a depleted battery reached 53% in half an hour.

Our endurance rating denotes how long a single battery charge will last you if you use the Motorola Moto Z3 for an hour each of telephony, web browsing, and video playback daily. We've established this usage pattern, so our battery results are comparable across devices in the most common day-to-day tasks. The battery testing procedure is described in detail in case you're interested in the nitty-gritties. You can also check out our complete battery test table, where you can see how all of the smartphones we've tested will compare under your own typical use.

The Moto Z has always used a single loudspeaker - the earpiece. Even though the display now takes up more space in the same size body, the speaker is somehow even louder than the Z2 Force.

Dynamic response is very good for a smartphone speaker. The sound this loudspeaker produces is clean and clear with zero distortion. Motorola has always made strong loudspeakers and the Moto Z3 is no exception.

The Motorola Moto Z3 delivered the faultlessly accurate output we've come to expect from smartphones these days when hooked to an active external amplifier. In fact it went a step further and garnished it with impressively high volume.

Headphones did damage to the stereo crosstalk and added a tiny dash ot intermodulation distortion. The slightly worse than average stereo takes a few points away from the Moto Z3, but the output is still pretty solid. And loudness was up there with the best too, so we can easily give this one the stamp of approval.