Flip and the city

The music player of Nokia 6600 fold is pretty much what we are used to seeing in Nokia feature phones. It has very decent looks and nice all-round functionality, including a good number of supported formats and album art.

The music player automtically sorts your tracks by artist, album and genre

The player has an extra skin on top of the default one we got to know since Nokia 5300 XpressMusic. It comes in purple, which perfectly blends with the rest of the phone and looks quite well actually.

There's also an alternative theme for the player

If you don't like the headset that ships with the phone, you can easily replace it thanks to the 3.5mm standard jack that is to be found on the remote.

Back to the player, we have to say it offers a large number of configurable options. The sonic experience gets enhanced by an equalizer and a stereo expansion function. There are 4 equalizer presets on Nokia 6600 fold plus two user slots that can be modified as they wished.

Nokia 6600 fold comes complete with a stereo FM radio. It uses the audio player interface and has the well known functions. The proprietary Visual radio client uses data connection to enhance the radio experience by adding graphics and visuals to the audio content broadcast by Visual Radio compatible stations.

Much like the music player, the FM radio also has two different skins to pick from. RDS is also supported so the package seems complete.

The video player of Nokia 6600 fold is compatible with the 3GP and MP4 formats. Videos can be played in fullscreen mode, as well as fast-forwarded or rewound. The possibility to remove the soft key captions to make better use of the full screen mode also has a positive impact on the viewing experience.

The video player is hardly any news

The audio quality of Nokia 6600 fold is decent, save for the really high IMD+noise reading. The phone now has commendable noise and dynamic range levels and the frequency response has also been improved from what we have seen in previous Nokia handsets. Here go the results so you can see for yourselves if Nokia 6600 fold is good enough for you. 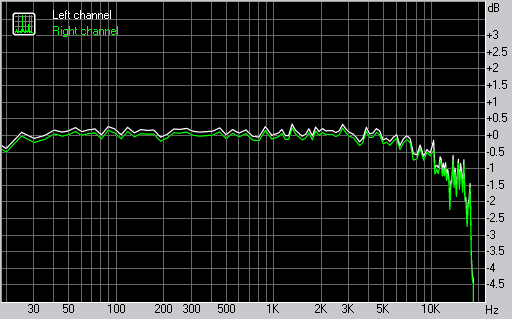