The Nokia N1 comes in a sleek flat black box with the tablet itself, a charger and a cable. The charger puts out 5V/2A, while the cable is pretty special - a standard USB 2.0 Type-A on one end and a USB Type-C on the other.

The retail box and its contents 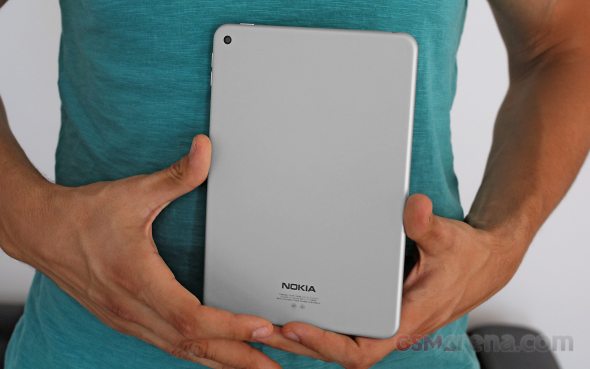 Both Nokia and Foxconn have experience with metal devices and they put them to good use in the Nokia N1 tablet. The design isn't novel, but it looks and feels good. It's nearly identical to the iPad mini, which will have you explaining to your friends that "No, it's not an iPad."

The Nokia N1 looks dangerously similar to a well-known competitor

The Nokia N1 is 0.6mm thinner than the mini and its smoothly rounded sides make it very comfortable to hold. Nokia could have trimmed the bezels, Apple has never had the thinnest bezels but that's not really a feature to imitate.

The positioning of the controls is virtually identical, except that there's no hardware button on the front. The 5MP selfie camera is centered above the screen, there's also an ambient light sensor. The screen itself is behind Gorilla Glass 3 that is flat, but goes smoothly into the beveled sides which makes side-swipes feel smooth.

The other missing thing is the mute slider on the right, but the two volume buttons are where iPad users would expect as is the power button on top and the 3.5mm audio jack. The mic is not centered, but closer to the Power button.

The stereo speakers on the bottom with the USB port between them is just as familiar. It's not a Lighting port, but USB Type-C instead. The plug is reversible too, though Type-C is noticeably bigger than Apple's proprietary Lighting port. We'll cover it more detail in the Connectivity section on the next page.

USB Type-C in between the stereo speakers on the bottom

The back is a single piece of aluminum with only the 8MP camera snuggled in the top left corner. There's no flash here but we don't hold tablet photography in high regard so that thing won't be missed. There's no Apple logo though, just a small Nokia logo near the bottom. This is the biggest giveaway that you are not in fact holding an iPad mini 3.

The bare aluminum back looks great even without an Apple logo

Nokia get top marks for build quality, the N1 is excellently put together. The bezels could have been smaller, but our main complaint about the design is this - it's an unabashed iPad mini clone. The Nokia Lumia 2520 wasn't all too different, but that design team went to Microsoft so we hoped some fresh blood in the design department would have tried something different. We also have to take into account the fact that this product has been designed for the Chinese market, which reveres Apple products, so it's not a big surprise that somebody would try and copy their looks.