For now Nokia offers the N1 tablet in Wi-Fi only flavor, but you still get a contacts app. Since our tablet was without Play Services we failed to sync our tablet (Google has discontinued free Exchange support). We ended up exporting the contacts from a phone to a VCF file and importing it on the N1, hopefully the international version will not have such hiccups.

The Contacts app with Material Design • it doesn't quite fit on the 4:3 screen

The Contacts app itself follows Material design, though it feels like it wasn't designed for the 4:3 aspect ratio of the screen. Viewing a single contact leaves empty space on the sides of the UI.

There's not much you can do from here than send email, there isn't even Hangouts on our unit.

Out of the box you only get an email app, which is based on the AOSP app. It's a beautiful, functional app that supports multiple accounts (IMAP or Exchange) and has a split-screen UI in landscape mode, which makes browsing emails very quick.

The email app is attractive and functional

Other messaging apps weren't provided but you can download some. You're a bit limited by the lack of a SIM card - Viber supports tablets, but WhatsApp does not. Viber will also allow you to do voice calls too.

The keyboard pre-installed on the device is the Android Keyboard with the new Material Design theme. It supports spell checking, text correction and gesture input. The gesture input didn't work for some reason though. You can add a dedicated number row and additional punctuation keys if you enable the PC layout.

The gallery app looks straight out of Ice Cream Sandwich. It sorts photos by Albums, Locations, Time, People and Tags. Unfortunately, some of those don't seem to work, you can edit tags and there's no facial recognition.

The app can do slideshows and there are basic editing tools - you can add preset color effects, borders, crop and straighten images as well as adjust image properties for quick correction of your photos.

The Gallery is pretty basic, has Holo looks

There's no DLNA support here though, the only options in the Share menu are Bluetooth and Email. For what it's worth the Gallery works fast, but don't expect anything beyond basic photo and video browsing.

On international Nokia N1 tablets the Google Play package will be pre-installed so you'll have Google's more capable apps, like Photos.

If the Galley felt outdated, wait until you see the music player. It's brings back Gingerbread memories with its UI, the Now playing screen looks especially dated. You'll probably want to download a third-party player, but this one will get the job done.

Even FLAC tracks (both 16-bit and 24-bit) are supported. You also get a 5-band equalizer with presets and with headphones plugged in there's also Bass boost and Surround sound. Again, no DLNA though.

Google Play Music is actually a very good offline music player so you'll probably use it more than Nokia's app. There's the option to stream music too and even though there's no 3G/4G connection the app will cache music so you can keep listening between Wi-Fi hotspots.

The Nokia N1 has two speakers on its bottom, each rated at 0.5W. The positioning isn't great for a full stereo effect and in landscape mode you tend to cover at least one speaker with your hand. It's not very loud either, though that seems to be the norm for ~8" tablets with stereo speakers.

The Nokia N1, Xperia Z3 Tablet Compact and iPad mini 3 all score Below average, while the Galaxy Tab S 8.4 and LG G Pad 8.3 both managed a Good score.

There's no dedicated video player, you launch videos from the Gallery or the File manager instead. There's no subtitle support, no DLNA again, but the Atom chipset comes with Intel Smart Video.

It promises to enhance videos with smoother motion, lower noise and boosted colors and contrast. You can toggle both options too.

Still, you'll probably want a third-party player if you do serious watching - the 4:3 screen isn't the most inviting for modern videos though. The hardware is quite capable and handles 1080p videos using any codec you can throw at it (multi-channel audio is not supported as usual).

There's no TV out hardware but you can use the Cast screen option from the notification area, which wirelessly mirrors your tablet screen on a Chromecast or a compatible TV. Again, it's a 4:3 image though, even on a 16:9 TV.

The Nokia N1 turned out to be a talented performer in the first half of our test - the one with an active external amplifier. The tablet had high volume levels as befitting to its device class and excellent results in every reading.

Plugging in a pair of headphones brought quite a lot of extra stereo crosstalk and brought the volume down a bit, although the latter still remained above average. Some intermodulation distortion crept in, but it's too little to have a huge effect on the perceivable output. All in all, the results are very good and will please the vast majority of the users, even if they are not quite the best around. 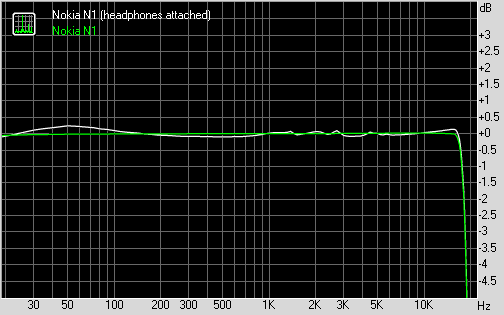