The McLaren Edition comes in special retail packaging with a fine texture you can feel that makes the papaya orange color pop at you. "Salute to Speed" - the phone's tagline - is embossed into the box in black bold print. Finally, OnePlus and McLaren's logos are at the lower corners of the box.

This is just a sleeve - the real box is inside and it features a premium carbon fiber-like texture all around. Opening the magnetic lid reveals one more tagline: "Fast and Smooth", and Salutes to Speed one more time. The first thing you take out is the book, but be careful when flipping the last page, because this is where the phone is! 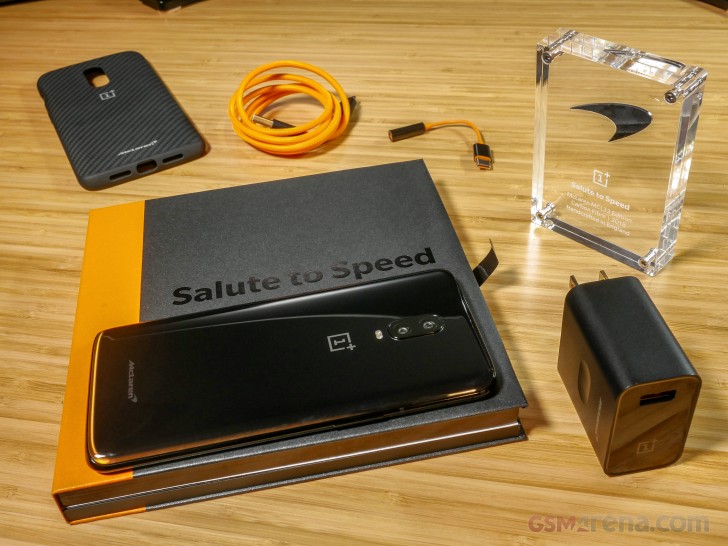 When we first opened it, we almost dropped the darn thing since we didn't know it was in here and it isn't really secured to the book-box. Anyway, the book has McLaren's brief history, visions, and philosophies and what's cool is the phone itself has an AR feature built-in that brings the pages to life with photo galleries and videos. 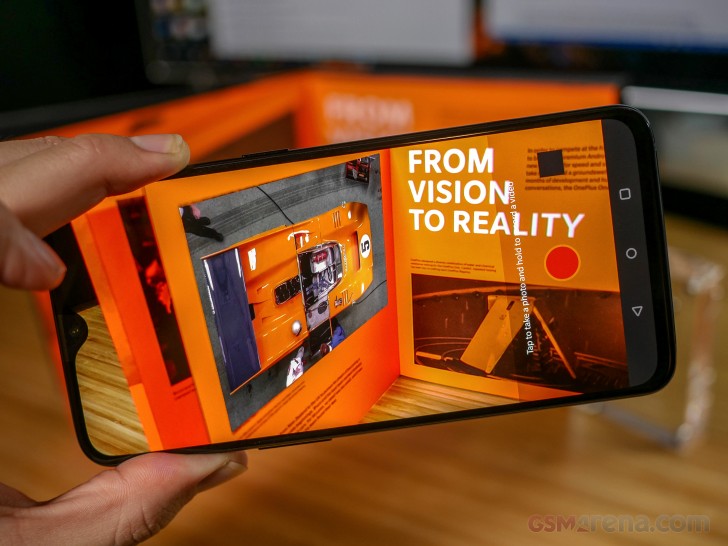 Under the book you'll find the new Warp Charger, which effectively succeeds Dash Charge and has 50% more wattage (30W vs 20W) and the charging cable is wrapped in a very nice bright orange braided cord. There's a 3.5mm to USB-C headphone adapter, also orange, and a sturdy carbon-fiber case included.

Under the case is a plaque with McLaren's Speedmark logo, made from hand-crafted carbon fiber used on the McLaren MCL33, which will drive any Formula 1 fan wild. Underneath this is the standard documentation pack with a bright orange quick start guide.

While we do like the carbon fiber case, we find that it covers the beautiful glass underneath. If it's any consolation, the case carries the McLaren branding on it as well.

The McLaren Edition OnePlus 6T has a very unique color scheme which the company calls "Speed Orange". We admit, we were a bit disappointed that this phone wasn't entirely orange. This scheme features a reflective orange accent that wraps around the lower perimeter of the glass and fades into black towards the top. 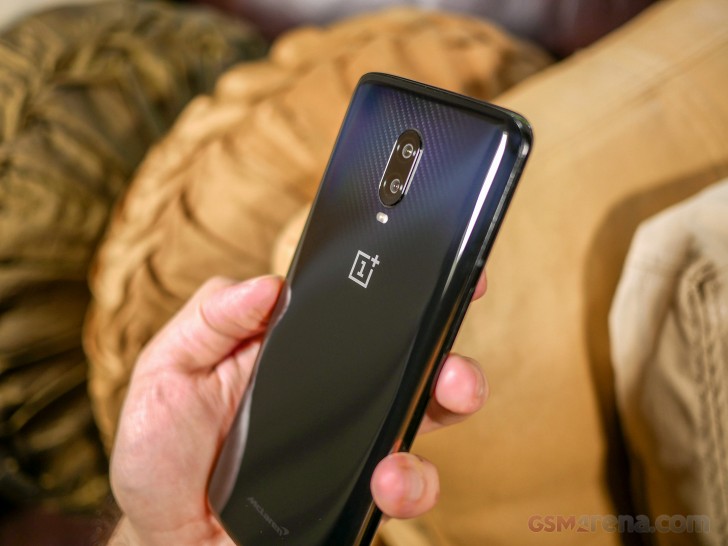 When the light hits it just right, the orange accent almost appears to be glowing and the McLaren branding is also reflective. In the upper center, there's a dot pattern under the glass that when held to the light, has a carbon fiber appearance. The pattern spreads outward from the camera and fades into black. 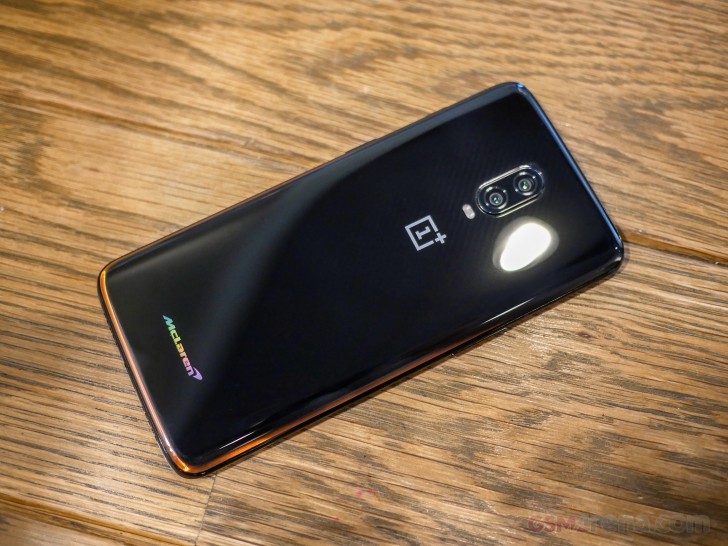 We really like these aesthetic choices in the glass but we feel they are more "safe" than "Formula 1 Car". We feel like the design could have been more eye catching and not so subtle. That said, this is still a gorgeous device.

Other than the color and polished frame, there isn't really any other difference with the phone's exterior. There's a mic at the top, and the volume rocker and dual SIM tray on the left side. At the bottom there's a USB-C port, which is the only port or entry so you'll need a headphone jack adapter if you want to use your own cans. 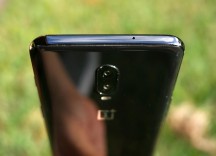 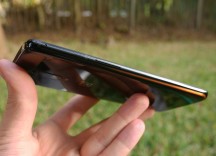 The left side of the bottom grille is the loudspeaker and the right is a microphone. On the right is a power key with OnePlus' physical notification switch, which we really love and we wish more phone makers did this. 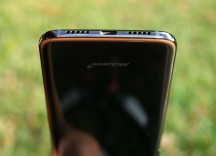 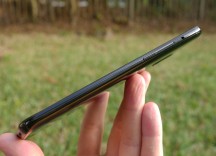 On the front is the same 6.41-inch FHD+ AMOLED display with a water drop notch. The phone's display goes right to the edges of the phone with the chin being the thickest part. As for the notch: there's a speaker slit above the 16MP camera and the proximity and light sensors are clumped along with the camera, which really minimized the need for a wider notch. 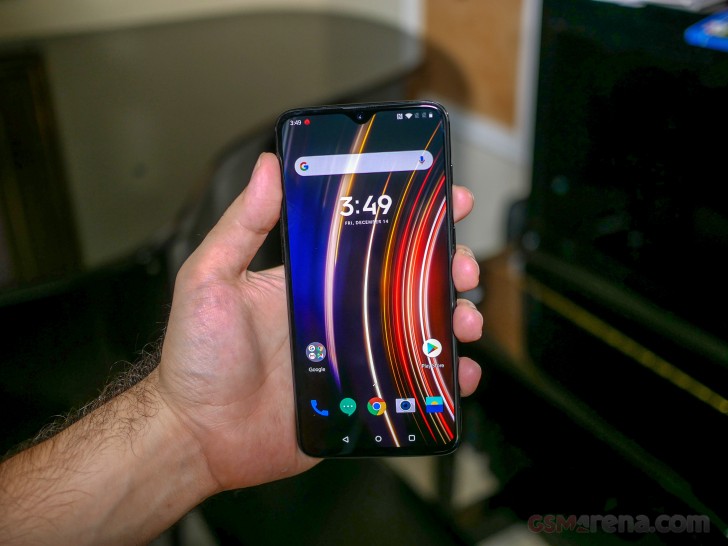 Finally, the camera array is identical to the standard 6T's: 20MP + 16MP dual camera setup with a dual LED flash.

The overall design of the McLaren Edition 6T is sleek and unique. While we were expecting to see a bright orange-colored phone in this box, the glowing orange accent is also just as nice. This is definitely a unique-looking phone but we're not really eager to throw it into the included case. It just covers up the beautiful glass in what could pass off as a generic carbon fiber case. 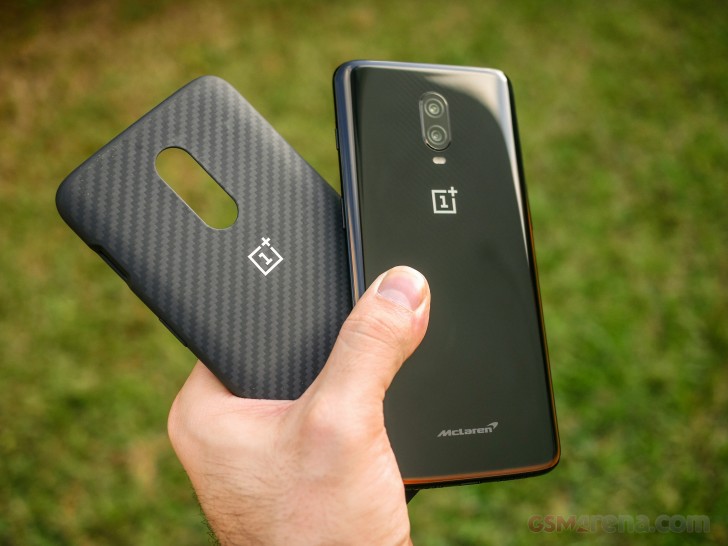 At least the case also carries the McLaren branding, has really nice grip, and the sturdy case is a great way to protect your investment.