The image doesn't reveal anything new but reconfirms the presence of a 64MP primary camera on the GT 5G Bumblebee variant. Realme didn't reveal the other two cameras' purpose in the setup, but rumors have it we are looking at 13MP ultrawide and 13MP telephoto units. 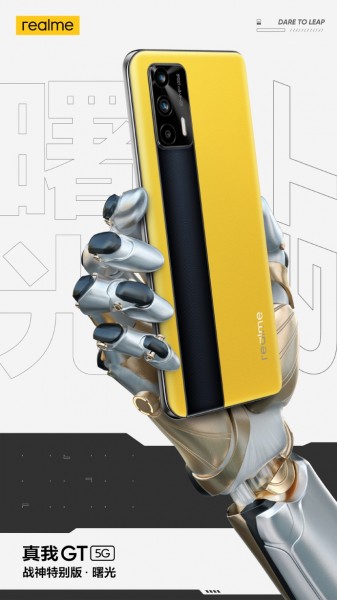 Machine translation of Mr. Chase's post reveals the yellow variant will be called "GT Ares Special Edition-Dawn", but we'll wait for the official announcement on March 4 to know the leather version's exact name.

The company VP also said that the phone's design is inspired by the classic GT models and detailed its design process. You can check out the screenshot of Mr. Chase's Weibo post below, machine translated from Chinese, to learn more about it. 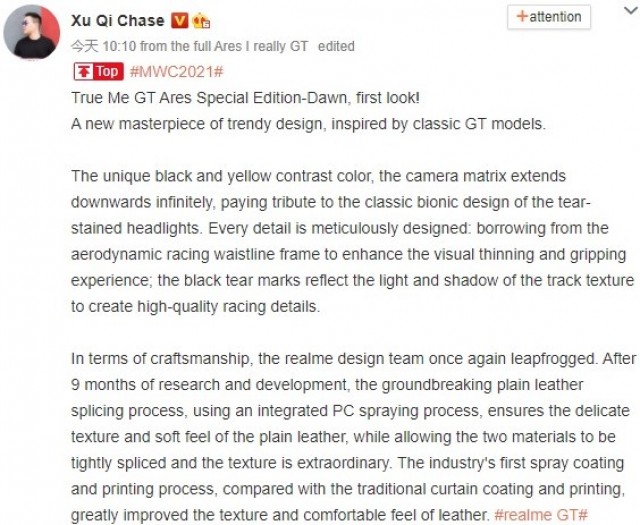 The Realme GT 5G will be powered by the Snapdragon 888 SoC and is expected to come with Android 11-based Realme UI 2.0, 12GB RAM, and 256GB storage. Although there will likely be other memory configurations as well that aren't confirmed yet.

The GT 5G will pack a 120Hz screen and support 65W charging, but the battery capacity remains unknown.

Let's see what's new though am sure that it will be with google dialer and google messaging with some bloat like App market and Hot games.

Bumblebee i love bumblebees. What a brilliant idea. Hope we get a decent price and hope it will be available in Slovakia. Ordering from abroad is a bit harsh in those hard times.

I think it's a 2mp macro, but you could be right.