The Realme X2, that's all set to go official on September 24, will sport a Super AMOLED screen with a fingerprint reader underneath.

This confirmation comes from Realme who took to Weibo to announce that X2 will have a screen-to-body ratio of 91.9%. The company didn't reveal the screen diagonal, but said that the fingerprint scanner underneath will unlock the smartphone in 0.36 seconds. 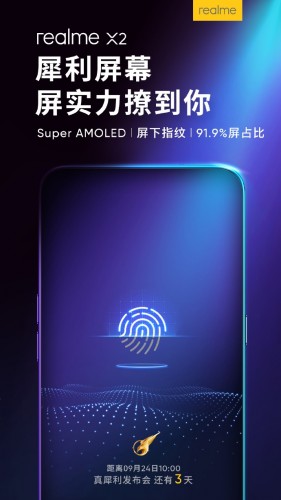 Let's see if the company reveals anything else about the X2 before it goes official on next Tuesday.

Well ecause i run a phone shop i saw many S10 with a big hole in lower half of the screen on a panzer glass its looks weirrd and because replacing screen on S110 samsung is very costly is a big no for me.

I know what this word means but for an non native speaker I find it weird and annoying :D