The light side of life

Samsung B7300 OmniaLITE review: The light side of life

The Samsung B7300 OmniaLITE units produced after October 6th (the official release of WinMo 6.5) come with the latest iteration of the Microsoft OS preinstalled. The older ones are running WinMo 6.1. However, since they are all eligible for a free upgrade, it's not a really big deal.

By the way, if you happen to like the Samsung home-brew TouchWiz UI you may as well forget which version of Windows you are using. The changes brought by TouchWiz run so deep this time that you hardly ever see a default Windows screen. Anyway, TouchWiz is there and it's optional - it's up to you to enable it or not.

TouchWiz gives you three different homescreen panes that can be alternated by finger sweeps. They are then free to be filled up with widgets. You can also assign different wallpaper to each homescreen.

The widgets are numerous mini applications or shortcuts to different parts of the user interface, sitting in the tray on the left side until dragged onto the screen.

The available widgets vary quite a lot - from a digital clock, through a mini image browser and profile manager, to the CNN news application. You can also download additional widgets via the - yep, you guessed it right - Download Widget.

There is even a shortcuts bar that you can customize to lead to applications of your choice.

The customized Samsung "main menu" (that's launched by either the Start button or the Menu key) extends over four different screens that you can alternate with sweep gestures. The total number of screens is limited to 10 but you can freely reorder icons just like you would on an iPhone. You can also give each screen a different name to stay organized.

The customized menu can hold up to 10 screens of icons

Speaking of which, this whole Main menu has a really flat iPhone-like structure, in line with Samsung's recently released feature-phones. This approach gives you a simpler what-you-see-is-what-you-get interface but at the price of a bit complicated navigation.

The colorful interface offers the same two sets of icons as the Samsung I8000 Omnia II, the default set being the better-looking one in our opinion. You can of course also change the color scheme if you like.

Touching the status icons on top of the screen opens a set of large thumbable virtual buttons that give you quick access to the connectivity manager, detailed battery status and the system volume control. You can of course control volume levels with the volume rocker on the left but it doesn't hurt to have it here too.

Samsung have also preloaded the device with a nice and thumbable TaskSwitcher that obviously allows you to switch among applications and end some or all of them should you need to.

The key difference in the TouchWiz overlay of the OmniaLITE and Omnia II is the Cube multimedia interface, which isn't available in the Samsung B7300. Since it only brings a design boost we don't consider it a great loss.

As we mentioned, only after you switch off the TouchWiz you can get to the underlying Windows OS. If you have been keeping track you would know that it isn't at all that different from its predecessor 6.1. Microsoft mentioned that the whole 6.5 thing wasn't a part of their plan and really didn't go into it wholeheartedly.

We will have a quick glance at it here, but if you want a more detailed version of this part you can also check out our Windows Mobile 6.5 review.

The first change introduced by the new OS is the scrollable homescreen. The different items in the list are also scrollable sideways, giving you more functionality per line. For example, scrolling the Getting started item sideways allows you to set the clock, email account, device password, Bluetooth, custom wallpaper, custom ringtone, upload music and finally even remove the Getting started item for good once you're ready setting up the essentials.

The homescreen is pretty functional now

The next major change is the new Windows Mobile Main menu. It comes in the honeycomb pattern that so many people can easily recognize thanks to numerous official and leaked screenshots.

In the new main menu you've got all the installed programs plus shortcuts to the settings menu. Unlike the Omnia II, where the settings menu looked just like the main menu, on the OmniaLITE it is always covered by the Samsung TouchWiz and looks exactly like on any of the company's feature phones.

The perfectly flat structure of the Main menu can surely get a bit clumsy in time due to the huge number of icons piling up, but still we'd prefer that over the confusing experience that so many Widows Mobile new adopters have had in the past.

There are also some other minor changes such as larger font that allows for more thumbable operation in most menus and the option to alternate tabs by simple finger sweeps wherever Windows offers you tabbed screens. You no longer need to aim for the tiny titles at the bottom of the screen as on the WinMo 6.1 handsets - you just sweep your finger across the screen and the next tab opens instantaneously.

The ARM 1176-based CPU by Samsung clocks as high as 667MHz and allows the OmniaLITE to offer some great performance. However, this is in no small part due to the lower screen resolution, as it means there are four times less number of pixels to draw on the screen. Nonetheless, the speed and response of the OmniaLITE are certainly among its key assets.

To prove that we used the Spb Benchmark software to test the Samsung B7300 OmniaLITE performance. It achieved some pretty good results easily outdoing the original HTC Touch Diamond. 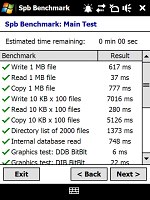 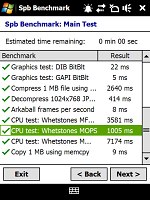 The mid-range OmniaLITE even outperformed the much more expensive on some tests, where memory access speed was crucial (writing and copying files). However when raw processing power is required (whetstones tests) the OmniaLITE is obviously no match for the 1GHz Snapdragon CPU.