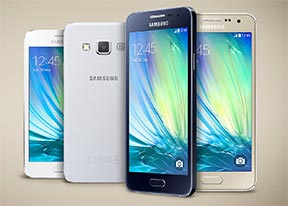 The Samsung Galaxy A3 is equipped with capable cameras on both sides. The back is loaded with an 8MP shooter and there's a 5MP selfie camera on the front. Both can record 1080p video, so you get similar quality video whichever one you use.

The camera interface combines still and video photography, though if you're shooting full-resolution photos (8MP with 4:3 aspect ratio) framing videos before you hit record may be a bit tricky.

Anyway, the right side of the screen holds the major controls - the two on-screen shutter keys (for stills and videos), the mode switcher and the gallery shortcut.

On the left you'll find additional controls, including the front/back camera toggle. You can drag two shortcuts here for the two settings you change most often.

The Galaxy A3 comes preloaded with the usual camera modes like panorama, continuous shooting and HDR.

Selfies are the highlight - you can trigger the camera with a voice prompt or by putting your palm up. Also, the Wide Selfie mode will snap three photos to cover a 110° view of your surroundings (120° if you're shooting in landscape). This lets you fit a larger group into the shot. The auto-editing features like Beauty face perform some automatic enhancements with a slider to control the strength of the effect.

The image quality is good, though we've seen 8MP shooters that capture a better level of detail. The Samsung Galaxy A3 photos show a balance of noise and noise reduction that leaves traces of both, so detailed textures get smeared, while leaving the blue sky looking fairly grainy.

Color rendering is accurate and the dynamic range is good - only areas brightly lit by the sun get overexposed, while the camera retains detail in the shadows. Pixel peepers will notice some oversharpening halos. Overall, the image quality is good for the Galaxy A3's segment.

And here are a couple of shots from the 5MP front-facing camera:

In case the strongly lit areas prove too much, you can enable the HDR mode, which improves bright areas (typically the sky). The effect is much weaker in the shadows - they are a bit darker, which improves the contrast without noticeably losing detail.

HDR off and on

The panorama mode creates 1,200px tall images if you shoot in portrait mode (about half of that for landscape shots). The stitching looks accurate with no major artifacts, though straight lines have some waviness to them.

8MP does not sound like much these days, but it's the resolution of choice for the iPhone since the 4S days. Compared against the latest release, the iPhone 6, the Samsung Galaxy A3 is a bit behind in terms of sharpness, but for the smallest of the Galaxy A-series this is solid performance.

The Samsung Galaxy A3 sticks to 1080p video capture, which isn't as flashy as 4K but is the more practical option (not to mention that we can't expect 4K from a mid-ranger just yet).

Videos are stored in MP4 files at 1080p resolution and 30fps frame rate. They are recorded at 17Mbps total bitrate, including 256Kbps bitrate for 48kHz stereo audio. This is as good as it gets for smartphone audio recording at the moment.

Options for the video camera on the Galaxy A3

Videos are tack sharp and the framerate is smooth. Color rendering and dynamic range are similar to the still camera, which is to say, they're good.

Unlike stills, noise isn't an issue for videos. One noticeable omission here is the lack of 60fps mode - while 2160p is hard to justify until you get a 4K TV, the smoother motion in 60fps videos can significantly improve action-packed scenes.

Here's a video sample, shot whit the Samsung Galaxy A3.

You can also download this untouched video sample - 0:10s, 21.7MB - for closer examination.

The Samsung Galaxy A3 uses the usual bitrate for FullHD videos (1080p) and while it's not quite as sharp as the best 1080p cameras out there, the end result stays close to the likes of the Apple iPhone 6. We've seen Android mid-rangers do significantly worse - "1080p" is just a label, unless the phone can back it up with matching quality.

Next Page » 9. Browser, other apps
8. Still and video camera
Reviews Samsung Galaxy A3 and A3 Duos reviewPage 8