The Samsung Galaxy A5 (2016) features a Super AMOLED display, Samsung's specialty. It's a 5.2" 1080p screen rather than the 5.1" QHD unit on the Galaxy S6. Not that either number has a particularly huge impact on the experience. 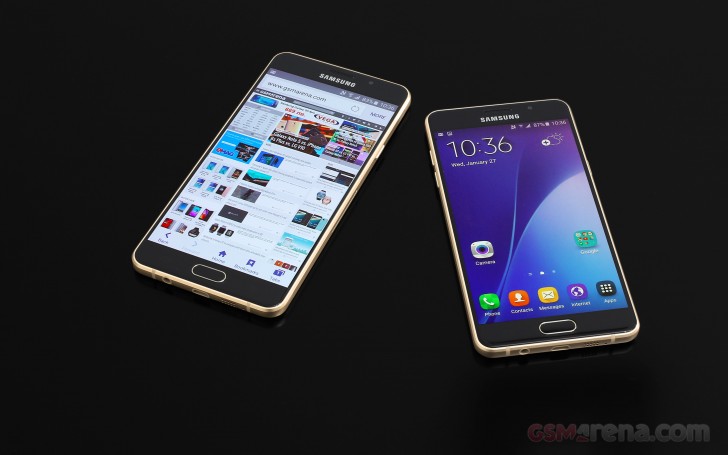 One thing we noticed is a slight flicker - practically all AMOLED displays (and some LCDs) have that effect, it's just that the effect is stronger on the A5. You can't really notice it with the naked eye, but the effect doesn't have to be visible to have an impact (some people can get headaches from screen flicker). At higher brightness the effect is less visible, it becomes strongest below 40% of the max brightness.

The Galaxy A5 (2016) screen can scale its brightness from very dark 2.1nits (suitable for late night viewing) to very bright. At full blast on manual you get 420nits, a good reading slightly below the median maximum, but auto mode can push it as high as 600nits.

As far as color rendering is concerned, the Galaxy A5 is spectacularly accurate in the provided Basic mode with an average DeltaE of 1.3. Color accuracy on the default Adaptive mode however is only average (Avg. DeltaE of 8.1).

Even at manual mode's maximum of 420nits the display remains perfectly legible, but you can get even better performance if you toggle the Auto mode.

The Galaxy A5 (2016) does not have a Display mode setting like some other Samsung's. You don't really need one though - the display is calibrated and produces some of the most accurate colors you can see on mobile. It has an average deltaE of 1.3 and a maximum of just 2.2 - lower than the average for most displays out there.

The Samsung Galaxy A5 (2016) has a SingleSIM and DualSIM models, though which one you get is region dependent. Whether the microSD card has a dedicated slot or it replaces SIM 2 also changes by region. Either way, the A5 has LTE Cat. 6 connectivity for fast mobile data.

Local connectivity is handled by Wi-Fi a/b/g/n, no 802.11ac but that's not a huge omission. You do get Bluetooth 4.1 and ANT+ for low-power connections to sports wearables.

There's also NFC and MST (Samsung's proprietary tech that emulates magnetic cards) for Samsung Pay. They are paired with a fingerprint reader and allow you to pay with your phone at checkout, at least in the several pilot markets for the service.

Also, the Galaxy A5 (2016) has FM radio, isn't that neat? We know many have moved on to streaming, but sometimes plain, old FM is more reliable than Internet services (no need to pay for data either).

The phone has a 2,900mAh battery, not bad for its size, especially considering the Galaxy S6 has 2,550mAh.

The Smart Manager monitors app usage and will optimize apps that you haven't used for a while (preventing them from suddenly draining the battery).

Also, here you'll find two modes - Power saving mode and Ultra power saving mode. For both, you get an estimate of how much battery life you can expect if you enable the mode.

With a bigger battery and a less demanding chipset, the Galaxy A5 (2016) aced the battery test. It posted an endurance rating of 91 hours with just one SIM. With both SIM slots occupied that dropped to 77 hours, but the standby battery draw remained very low.

The individual tests were very impressive too - you can talk for nearly 21 hours straight or browse the web for 10 hours. Or watch a 12-hour movie marathon.

Compared to the Galaxy S6 you get a noticeable boost in endurance, while the individual tests are largely the same. The S6 does last an hour longer when browsing the web though.

In 2016 we're transitioning to using a fixed 200nit screen brightness for our battery tests instead of merely positioning the brightness slider at 50% which worked out to a relatively random brightness level.

The level of 200nits, which we've chosen for our tests, has become somewhat of an industry standard. But more importantly, it's both the median and average value of the brightness levels at which we've tested all reviewed devices so far. This means our older battery life results will remain relevant and comparable.