Standard retail package with a bonus

The Samsung Galaxy Ace 3 comes in a very compact box, in line with Samsung's recent undertaking of using recycled paper and soy-ink print for the packaging.

The retail package features a nice set of headphones

The Ace 3 comes with a standalone A/C adapter that does not require the use the supplied microUSB cable for charging, as well as a pair of premium-looking headphones with molded earbuds. We would have liked all white accessories to go with our white colored Ace 3, but only the headset comes in a matching color.

With a 4-inch screen now, the Samsung Galaxy Ace 3 measures 121.2 x 62.7 x 9.8 mm, which is slightly larger than the Ace 2 except in thickness, where Samsung has been able to trim off 0.7mm. With the thickness going south of 10mm the devices feels noticeably slimmer than the Ace 2. The LTE version of the Ace clocks in at exactly 10mm of thickness.

Weight-wise, the Ace 3 comes in slightly lighter than the Ace 2 by about 7 grams. The Ace 3's LTE version is slightly thicker and heavier, which leads to an even smaller difference compared to the Ace 2.

The Galaxy Ace 3 follows Samsung's rather overplayed design strategy. Other than a slight refresh given to the flagships, Samsung's design has remained the same when it comes to its more affordable range. It features a slick glossy paintjob that tends to attract its fair share of fingerprints. They're not too visible on our white paintjob, but we imagine they're a bit more obvious on the black and dark red-colored Ace 3's.

The Samsung Galaxy Ace 3 has a tired design

Anyway, let's take a good look at the handset. Bellow the display you get the usual three keys: capacitive Menu and Back buttons either side of the hardware Home key.

The usual set of keys sits below the display

Above the display we have the earpiece as well as the usual proximity sensor. There's a VGA front-facing camera for video calls.

There's an array of sensors next to the front-facing camera

The left side of the Samsung Galaxy Ace 3 is where the volume rocker is located, while directly across on the right is the power/lock button.

The top of the Ace 3 features the 3.5mm audio jack as well as a small slit for removing the back panel. At the bottom you'll find the microUSB port and microphone pinhole.

The 3.5 mm audio jack on top • the microUSB port on the bottom

Looking at the back, you'll see that the Samsung Galaxy Ace 3 sports a 5MP camera capable of recording 720p video, and an LED flash. The loudspeaker grille is next to the camera.

Undoing the back panel reveals the 1500mAh battery (1800mAh on the LTE version), alongside the dual SIM ports and the microSD card slot. Although only one microSIM port is blocked by the battery, neither is hot-swappable. The microSD card is, though you should unmount before removing it to avoid possible data corruption.

The removable back panel reveals the battery and card slots

Battery performance from the Ace 3 was about what you'd expect from this price range. Decent standby and talk times were brought down slightly by less than stellar video playback and web browsing performance, resulting in an overall endurance rating of 34 hours. 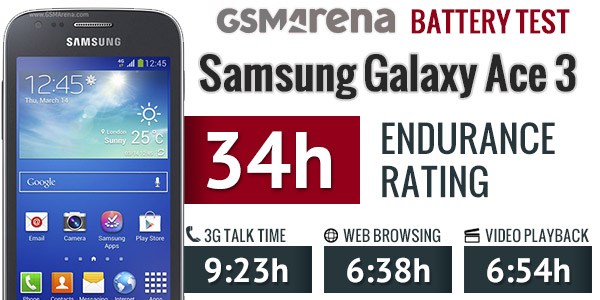