Android 6.0.1 Marshmallow at your service

The Samsung Galaxy C7 boots up with Android 6.0.1 Marshmallow with TouchWiz UI on top. The latest available version of Android bundles cool features like native support for an app manager, Doze mode, and Google Now on Tap among other tweaks. Plus, Samsung has gotten to a point where its interface looks quite refined. The C7 also has the benefit of being quite clutter-free with almost no annoying bloatware, but more on that later. 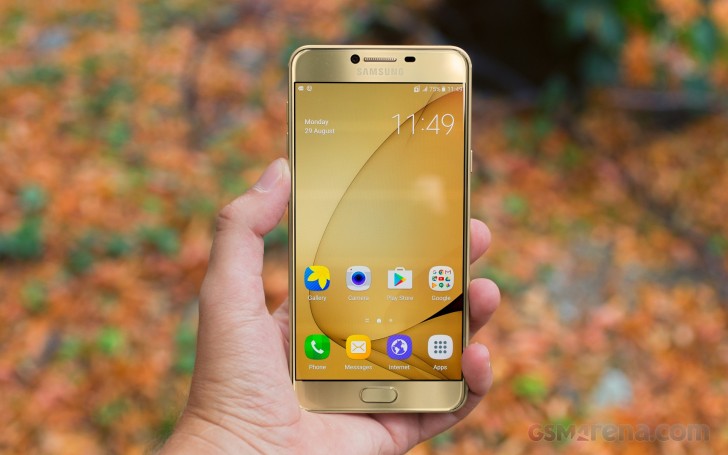 The lockscreen is the typical Samsung deal and offers swipe to unlock and a pair of quick shortcuts on the bottom. The fancy always-on display from recent flagships is missing. Both the Galaxy C5 and C7 are also equipped with fingerprint readers. They reside in the home button, as is typical for Samsung and work as good as the ones found on company flagships. This does, however, mean that said readers are not always on. Rather, to unlock the phone, you have to press the Home key and leave your finger for a moment longer while the fingerprint reader does its thing.

Speed-wise, the C7 and C5 tend to come closer to the S7 than the previous generation S6. The unlock speed is somewhat dependent on the processor itself and feels just a bit slower on the C5. Regardless, both phones recognize a print in less than a second, and while we have seen a lot faster readers out there, Samsung still has impressive accuracy on its side, which streamlines the overall experience.

The homescreen is identical to the TouchWiz home of other Samsung phones. You get plenty of extra home screens which tend to pile up to the right of the main one. However, the title of "main" can be reassigned to another one, leaving you with a more old-school "swipe both ways" interface. If you decide to leave it be, swiping once to the left opens up a Briefing interface for quick news consumption.

As for organization, Samsung has you covered with color-coded folders both inside the app drawer and on any home screen.

The Notification area is pretty busy by default. It starts with a scrollable line of quick toggles on top, then a brightness slider; then the Quick connect button. Everything can be rearranged from the Edit option.

Don't like the default look of TouchWiz? No problem, as the Galaxy C7 user interface is fully themeable. We only got the default theme pre-installed, which is great if you don't intend on using the feature. But otherwise, the Theme Store has you covered with many more to download.

Multitasking has also come a long way, especially on recent Samsung devices. Advanced features that were once only available to Note users have been trickling down steadily to other parts of the company's lineup. On the Galaxy C7 and even its lower spec C5 sibling, you can pretty much do every split screen and floating app trick that a Galaxy Note would allow, lacking only the S Pen magic.

You do, however, have to know where to look for the split screen UI as it's not immediately apparent. Supported apps will have a Split screen icon in the App Switcher, or you could press the Menu key for a bit longer. Once you launch the Split screen mode, you can even drag and drop content between them. You can also collapse either app into a floating, resizable app window.

Multitasking is a breeze

Overall, the latest iteration of TouchWiz manages to remain feature-rich, while also being reasonably light on resources. As a result, it runs without glitches on the Snapdragon 625 chipset inside the Galaxy C7. Speaking of which, follow us onto the benchmark section of the review.