The original Galaxy Core had its own little squad in what seemed like no time. A Plus model was released soon after the first one, and the Galaxy Core Advance came in a few months later.

The latter has the biggest screen in the lineup at 4.7" but it's the Galaxy Core LTE that brings the most meaningful upgrades: qHD screen resolution and, of course, 4G data speeds. 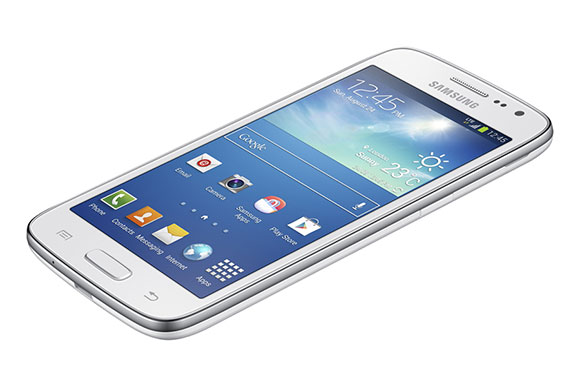 Anyway, the overall package follows the original recipe quite closely with a dual-core ARM processor, 5MP stills and Android Jelly Bean. The couple of Cortex A9 cores in the Galaxy Core LTE cannot quite match the productivity of more recent CPUs nor are they as power efficient, but Samsung's optimizations have helped squeeze solid battery life. The Core LTE manages the endurance rating of a flagship, which isn't very common in the midrange.

The focal feature is LTE and it's probably one of the cheapest 4G-enabled options in the market. This makes the Galaxy Core LTE an important one for Samsung, far above its otherwise entry-level standing. Even more so, considering the Galaxy Core LTE will face fierce competition from both the Android and Windows Phone camps.

LG have had a solid lineup of reasonably-priced LTE-enabled phones for a while now in the F-series, where the F6 stands out as the perfect match for the Galaxy Core LTE. With the screen size and resolution exactly the same, the LG Optimus F6 has a Snapdragon chipset and slightly bigger battery, while the Galaxy Core LTE is running a more recent Android release.

The Optimus F5 and F7 are other options to consider of course, if you don't thing the screen size and resolution are ideal. The F7 takes the resolution to 720p on a 4.7" diagonal and that's still more pixels per inch than the Core LTE has on 4.5".

Well, the Galaxy Core LTE may be outnumbered by the F-series but not alone - the Ace 3 isn't an option to frown at. Not at its current price at least.

Speaking of which, the Galaxy Core LTE's initial price tag isn't set in stone - in a few weeks' time it's likely to go down. And it should if Samsung are taking the likes of the Motorola Moto G seriously. A 720p screen, quad-core Snapdragon 400 and the latest Android version are the right kind of features to help people live without LTE. The excellent build quality and water-proofing thanks to the nano-coated internals are worth noting too. And that price.

If 4G is an absolute must though, the HTC Desire 601 and the Sony Xperia SP are not to be overlooked either. The HTC phone is a pretty close match, while the Xperia SP, even if slightly more expensive, is a great value-for-money proposition with a 720p screen, 8MP camera and excellent build.

Over at the Windows Phone camp, the Nokia Lumia 625 packs a slightly larger 4.7" display of WVGA resolution, which isn't too impressive. The handset is quite big and heavy too, at nearly 160 grams. The Lumia 625's chipset is more potent that what the Core LTE has, the price tag of the Nokia smartphone is hard to beat and, yes, it also supports 4G.

All in all, 4G data speeds is what defines the Samsung Galaxy Core LTE - and it tries to position itself as one of the cheaper options to have it. It comes across as very much a carrier's kind of phone - telecoms will certainly want LTE-enabled handsets that cover every price range. If you ever need to make up your mind, the great battery life and reasonably good screen are definite points in favor. We've just looked at a couple of alternatives, though, that can deliver a louder bang for your buck.