When you pack for vacation you make sure you grab a good pair of travel shoes, but is there such a thing as a good "travel phone"? Perhaps a cheap dual-SIM to make use of a local SIM card, but why not a Samsung Galaxy K zoom - so you can leave your camera at home?

You won't miss it either, the K zoom has the camera guts of a Samsung point-and-shoot. The image quality is much improved since the Galaxy S4 zoom generation and the camera software has been greatly simplified with fun features added. The S4 zoom had a full focus on manual controls but the reality is that a 1/2.3" sensor and a fixed lens will never really appeal to photographers with the advanced knowledge to make use of these. The Galaxy K zoom instead is shifting focus on making fun photos easy.

While the image quality you get out of a flagship phone is comparable, the K zoom has the distinct advantage of 10x optical zoom, along with 20x without too much loss in quality. Low light photography at night or in a club is actually possible - the xenon flash produces proper-looking shots instead of the murky photos of an LED-packing smartphone.

Even better, Samsung improved the Galaxy K zoom to the point where it's actually a good midrange phone. When the Galaxy S4 zoom came out last year it was woefully undeserving of the S4 name. The K zoom carefully omits the premium suffix but it has a good screen, up-to-date software and a fast chipset, along with great connectivity.

Still, there are comparable phones you can buy for less, leaving you enough cash to buy a point-and-shoot camera. So the key question is whether you can use the Galaxy K zoom as a daily driver. It's much thicker than any smartphone out there, plus it's fairly heavy even if it feels okay in the hand.

The Samsung Galaxy S4 zoom has dropped in price and costs less than a half of the Galaxy K zoom. This makes the idea of a "travel phone" more attractive as you won't feel bad about leaving it in the drawer most of the year. The camera isn't as good but it still has 10x optical zoom, a xenon flash and the camera ring makes manual controls a viable option.

Nokia did their own math on the phone + camera equation and added more phone than camera. Sure, the Nokia Lumia 1020 has a hump on the back and isn't particularly light, but it's a lot more manageable than the K zoom. It also has a much bigger sensor (it's 135% bigger) and higher resolution to boot. With all those pixels, Nokia manage an impressive lossless zoom (at 5MP) and there's a xenon flash.

The 1020 is the outgoing model, the Lumia 930 is the new hotness. It has a smaller sensor with half the resolution but is optically stabilized and there's no hump on the back, the cameraphone is just 9.8mm thick. Plus you get proper flagship specs including a 1080p screen and Snapdragon 800 chipset. There's no xenon flash but price-wise the new Lumia flagship is on par with the Galaxy K zoom.

Don't forget that Lumias have excellent offline voice-guided navigation that works without pre-caching maps (which is needed with Google Maps).

Sony have a large-sensored shooter too - the Exmor RS sensor is as big as the K zoom sensor, same resolution too. There's no zooming here though and the image quality falls short of Nokia's 20MP shooters or the Galaxy K zoom (we've had issues with lens defects for example). It does record 2160p video though, which neither the Lumias nor the zooms can offer.

Sony has an interesting alternative - a detachable camera you can add to any smartphone (Android or IOS) to give it a 1/2.3" sensor and 10x optical zoom. We're talking about the QX10 of course, it lets you add the more advanced camera when you need it and leave the extra bulk at home when you don't. The QX100 has the lauded sensor and optics from the Sony RX100 II for unmatched image quality in the phone world.

Note that the QX cameras don't have a built-in flash so you have to rely on the phone's flash. 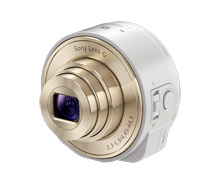 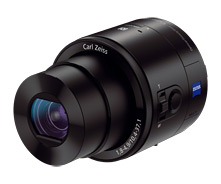 Samsung has a finger in every pie on the table so creating a niche device like the Galaxy K zoom is hardly a surprise. The niche it caters to is people who take tons of photos each day, but aren't into the nitty-gritty. The kind that cares about the connectivity and social networking features even the smartest of smart cameras fail to offer. It's a small niche but one the Galaxy K zoom doesn't have to share.