The Galaxy Note 10 Lite is the first Note in a while with a flat screen and that alone might be enough to entice the right crowd - never since the Note5 has there been a non-curved S Pen wielding Galaxy smartphone. 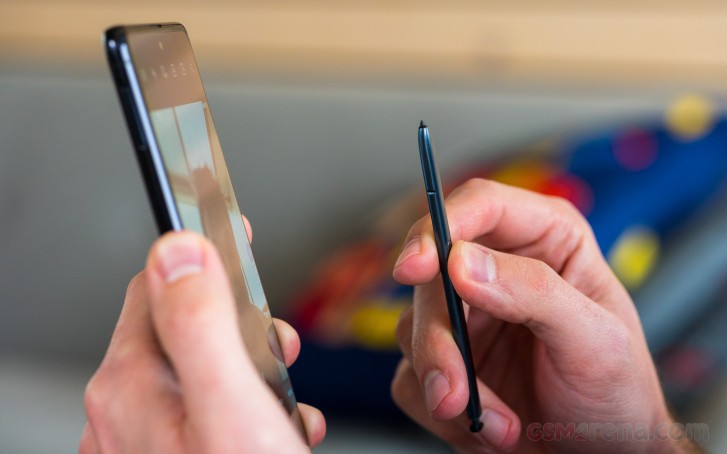 The flat display is not quite as trim around the perimeter as the ones you'd find on the Galaxy Note10 or Note10+ - those curved edges might be to everyone's taste, but they sure help with screen to body ratios. In that sense, the Note10 Lite doesn't have the high-end near-bezel-less look of its more upmarket brethren and instead resembles something more of an A-series smartphone. Even so, there's not a discernible difference between the top and side bezels, and the chin is a reasonable size as well, albeit thicker than the rest of the frame. 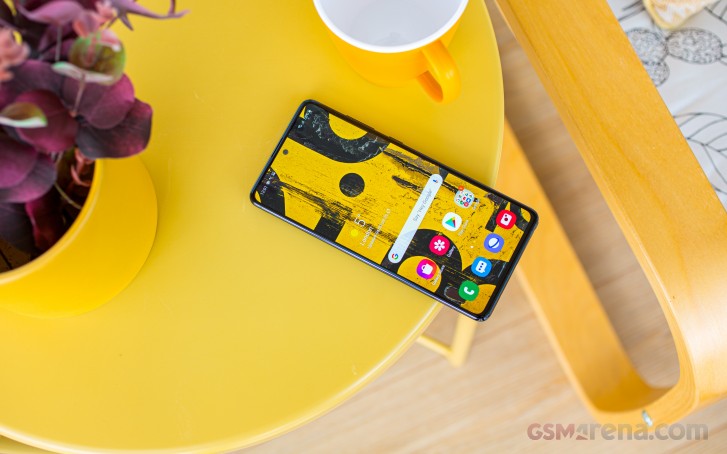 The Note10 Lite also takes a more conventional approach with its earpiece - a grille above the display replaces the minuscule slit+top port combo of the Note10s. It's also just an earpiece - there's no stereo speaker action on the Note10 Lite. One better than the real Notes, however, the Lite's front-facing camera peeks out of a much tinier hole, even though it matches their unit's aperture and has a bigger sensor - nice. 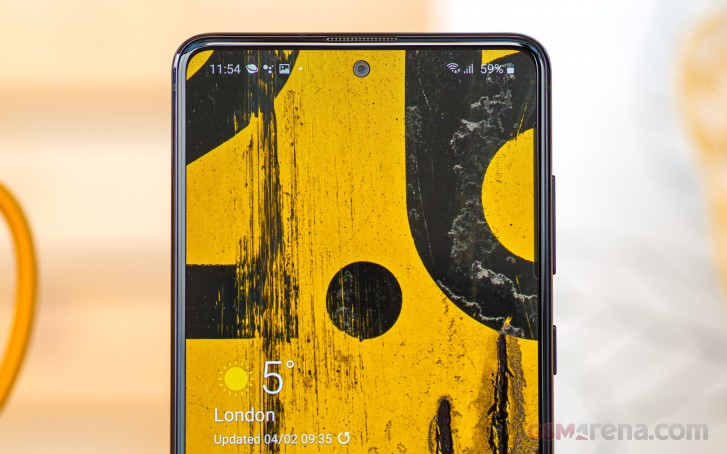 Cameras, you say - the Note10 Lite has three of those on its back. Arranged in a sizeable cluster in the top left corner, the three modules are kept company by the flash. This newly adopted camera design is to be found on all recent and future Samsung phones in one way or another, culminating in the monstrosity that is the Galaxy S20 Ultra (if the leaks do end up being the truth). 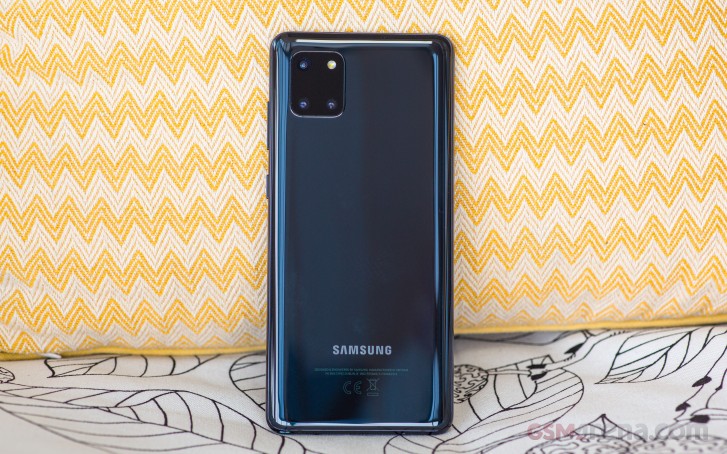 There are no labels on this one - a true blessing next to the Galaxy S10 Lite's entirely marketing-motivated 'Super Steady OIS' inscription we're not very big fans of. There's a Samsung logo lower don the back and some regulatory markings that you're likely to cover naturally when holding the phone. 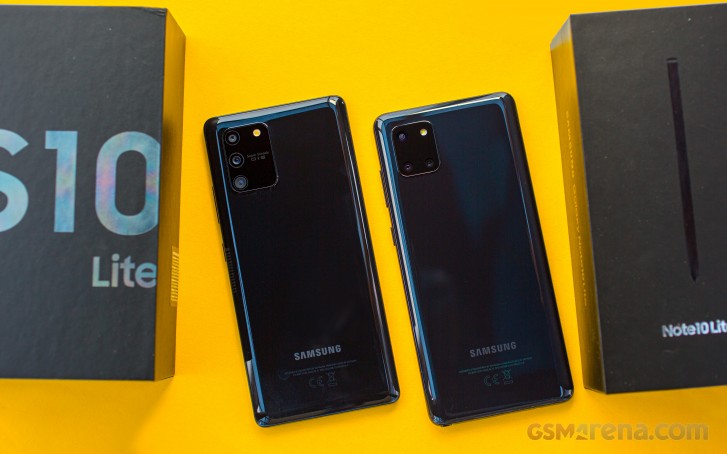 Samsung doesn't say what the back panel is made of and we can't say for cetaing say that it feels closer to a proper Note in this respect than to one of the lesser A-series phones we have lying around. Of course, with no Gorilla Glass in the spec sheet, we can't say what it is.

We can confirm, however, that the frame holding things together is metal, aluminum if previous Galaxies are any indication.

The physical buttons are all on the right. The 'side key', which tries to handle the three main actions - Bixby, powering off and launching the camera, between just the two actions of the double press and long press is a bit higher than the midpoint, in a well-positioned location. The volume rocker is above it. The buttons click positively, if not all that premium-ly, though the same could be said of the Note10 proper, so the Lite isn't at fault here. 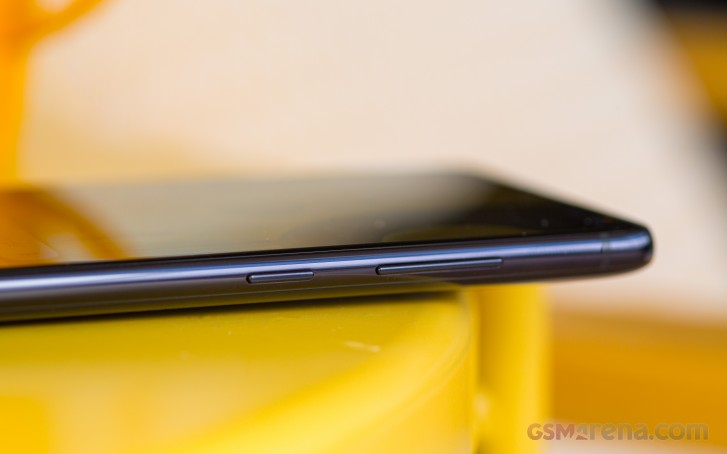 Down on the bottom, there's a whole bunch of things. The USB-C port is in the middle, and the S Pen is in its customary location on the right. The primary mic and the loudspeaker are placed in between them. That's not all, though - there's a headphone jack here too. Where's the headphone jack on the Note10 and Note10+? 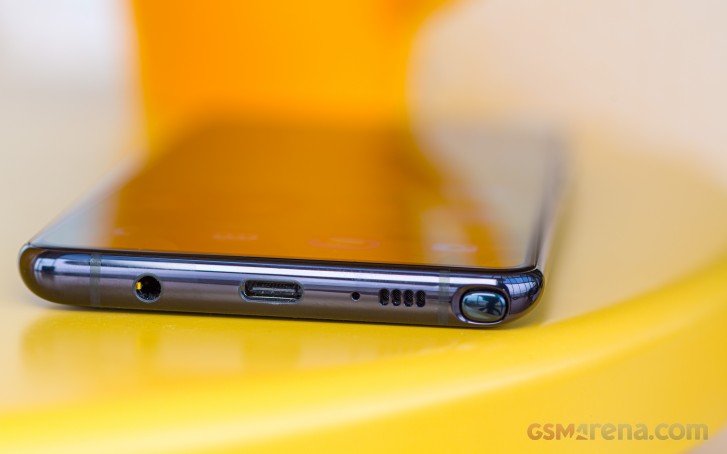 The S Pen itself isn't as functional as the one supplied with the proper Note10s and is more of a Note9 type of deal. You do get the Bluetooth connectivity that lets you use the stylus as a remote, but it can only operate with button clicks - there's no built-in gyro for waving gestures. At 4096 discernible degrees of pressure, it's as precise as the one on the Note10 and Note9. 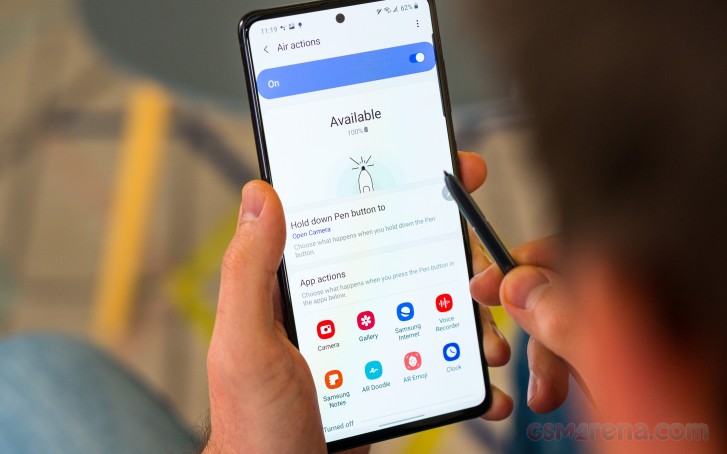 The Galaxy Note10 Lite is anything but light. At 199g it's 3g heavier than the Note10+ and tangibly heftier than the Note10 non-plus. The S10 Lite, meanwhile, is 13g lighter than the Note10 Lite too. The Note10 Lite measures 163.7x76.1x8.7mm - a footprint that is almost identical to the Note10+, but 0.8mm thicker, and that you can feel. Not to the point of being an issue and not a big deal in isolation, but a noticeable difference side by side. In any case, we appreciate that Samsung didn't prioritize thinness before battery capacity. 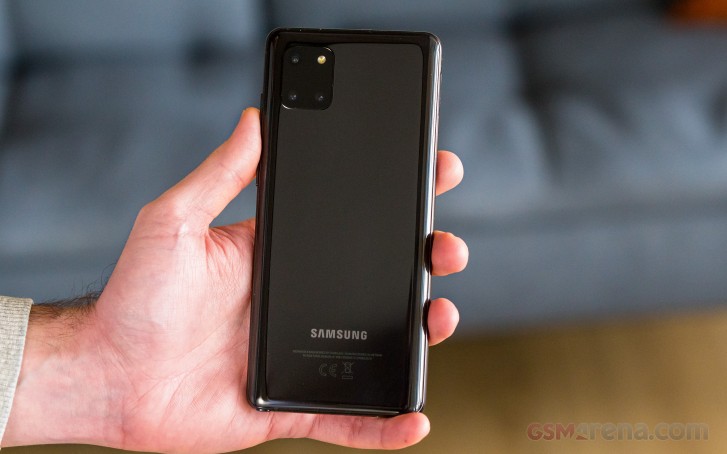 One of the compromises that go with the 'Lite'-ning up of the Note10 is the loss of the dust and water protection. The IP68 rating of the top-tier models may not be a guarantee for survival in an accident but offers some peace of mind that neither the Note10 Lite nor the S10 Lite can give you.