As aluminum has become the calling card of HTC, so has faux leather for Samsung. HTC kept the basic design unchanged with only a couple of functional changes and a new finish at the rear (one of three options).

Samsung has made fewer changes, but they are perhaps more recognizable. The back is still made of plastic, but it looks much different than the smooth, glossy plastic of the Galaxy S4 and even different than the faux leather of the Galaxy Note and Tab series. You'll hear differing opinions which plastic is better, but one thing is for sure - the perforated leather looks is associated with the Galaxy S5 and will become instantly recognizable the way red and yellow gets you thinking "McDonalds" subconsciously - instead of thinking green.

The faux perforated leather of the Galaxy S5 up close

Let's start with the front where both phones have changed just a little. The HTC One (M8) looks almost identical with the two metallic speaker grilles, except the capacity keys were moved on screen.

The buttons have moved on-screen

There's even less changed on the Galaxy S5 - the key arrangement is the same (capacitive - hardware - capacitive), but the left button was changed from Menu to App switcher. While not visible to the naked eye, the Home button is different too, it doubles as a fingerprint reader (the swipe kind).

Physical buttons with a fingerprint scanner on the Home key

There's a slight change in the curvature of the phone's silhouette - the Galaxy S5 is less rounded than the S4, while the HTC went the other way and the M8 is rounder than the previous One.

As we said, the changes on the back are much more noticeable. The One (M8) has a unique look with two differently sized cameras and dual LED, dual-tone flash. There are three colors at this point: Gunmetal Gray, Glacial Silver, Amber Gold.

All three are aluminum, but the Gray one has a different finish - it looks like brushed metal and has a smooth, polished feel. The other two look and feel like the anodized aluminum of the first one. While we like that HTC gives us options, we didn't quite like the brushed metal version as much since it's so smooth it can feel almost plastic-like at times.

The most noticeable change at the back of the Galaxy S5 is the perforated leather look. The back is made of plastic and is smoother than the Galaxy Note faux leather, but still manages a relatively convincing feel thereof. There's a single LED flash below the camera alongside the heart rate monitor assembly.

The fingerprint scanner next to the LED flash

Another difference is that the back of Galaxy flagship is removable so you can access the battery. Even so, the phone has an IP67 rating - dust tight and can be submerged in up to a meter of water for half an hour. That scores a couple of important points for Samsung.

The sides of the two phones are also interesting. The Galaxy S5 does have a microUSB 3.0 port over the microUSB 2.0, which offers faster transfer speeds but is backwards compatible too (so it doesn't cause a shortage of compatible USB cables). The USB port has a flap to protect the sensitive connectors inside from water damage.

The flap that covers the USB port • the microUSB 3.0 port

HTC didn't change the ports, but instead expanded the metal unibody - on the One (M7) it covered 70% of the back and sides, on the One (M8) that number jumps to 90%. That's because the sides are part of the metal back rather than made of plastic.

The metal unibody now wraps around the sides of the phone, except the top

What HTC did well to change is the newly-added microSD card slot. This is great for people who need lots of storage, but didn't want to buy the pricier 64GB version of the previous One.

The new One has a microSD card slot

We'll talk about (and score) the display and other features (like the speakers) later, but we do have to cover size and in-hand feel before we finish off this chapter. The Samsung Galaxy S5 has a slightly bigger screen - 5.1" vs. 5" - but is actually 4.4mm shorter.

The two phones measure 142 x 72.5 x 8.1mm for the Galaxy and 146.4 x 70.6 x 9.4 for the HTC. The two loudspeakers and second camera on the back certainly contribute to the extra height of the One (M8). It is narrower than the Galaxy by a couple of millimeters though and the rounded back fits well in the hand.

Here's a footprint and screen comparison of the two phones. As you can see, the smaller screen on the One (M8) allows it to be a tad narrower, but the bottom bezel is thicker than the top one (it's where the HTC logo is). Add the two speaker grilles on each side and the Galaxy S5 is shorter, despite its bigger screen. 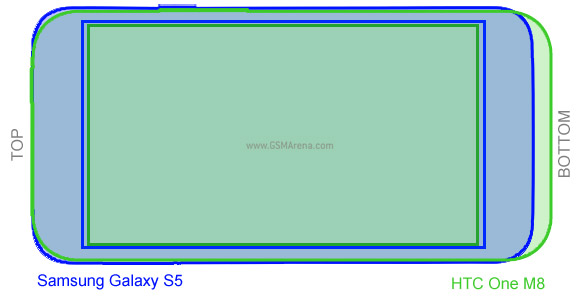 The Galaxy S5 is also 15g lighter - 145g vs. 160g - which tips the scales back in favor of the Samsung. Tall and heavy isn't an ideal combination for a phone and while it isn't by much, the HTC One (M8) is taller and heavier than its opponent.

Winner: Tie. To break the tie you need to answer a couple of simple questions about your preferences. Design over functionality? Compactness over loudspeaker quality? Will you be using a case? Is water resistance a must?

The HTC One (M8) is undeniably the better-looking phone (which might be void if you use a case) and the feel of real metal tops the feel of fake leather any day. The front-facing stereo speakers are also great, but the move to on-screen buttons didn't do much to reduce the height, though it does eat into usable screen space.

The Galaxy S5 is more practical though with the IP67 rating and user-accessible battery. It's more compact and lighter too. The faux leather is also much better than the glossy plastic of last year, even if it won't win over metal fans.