A retail box to match the price tag

Much like with the case of other $99 smartphones, the Sony Xperia ion for AT&T won't blow you away with its retail package. Inside the orange/white colored box, you will find a charger and a microUSB cable, along with the usual set of booklets.

Quite frankly, a set of headphones would have been much appreciated here, especially given Sony's own lineup of accessories. In the case of the AT&T flavored Xperia ion however, you will have to get one on your own dime.

The Sony Xperia ion is a well-designed piece of hardware. The handset recently won a Red Dot award for its pleasantly understated looks. However, for every person who thinks that the Xperia ion is a looker, there's probably another who would brand the device as being dull. On our end, we can't help but note, that the transparent strip, found in the Xperia S would have added a welcome touch of character to the Xperia ion.

Build quality is superb. The Sony Xperia ion for AT&T is a blend of high-quality plastic and metal, while the handset's screen is scratch proof - even the pickiest user will have a hard time finding something to frown about.

The measures of the Sony Xperia ion are fairly acceptable for a device with such a massive screen. They are 133 x 68 x 10.8 mm, while its weight tips the scale at 144 grams. The only negative worth noting here is the handset's thickness, which is far from great. In any case, the Xperia ion won't tear a hole in your pocket.

The 4.55" screen of the device is truly great. Backed by Sony's BRAVIA engine, the display is sharp, offers great color reproduction, and good contrast. Its pixel density of 323ppi is not as high as the 342ppi found in the Sony Xperia S's unit, but it's well on par with a the latest iPhone Retina screens offer.

The Xperia ion's display is gorgeous

There is a lot going on above the display. There, you will find the ambient light and proximity sensors, the earpiece, an indicator light, as well as the 1.3MP front-facing camera. Below the screen is where the four capacitive buttons for navigating Android reside. Their sensitivity is far from the greatest we've encountered.

The microUSB and microHDMI ports are neatly located under a cover on the left side of the phone. There is nothing else to be found there.

The microUSB and microHDMI ports on the left

Things get busier on the right side as it is the home of the power/lock key, the volume rocker, as well as the dedicated button for the 12MP snapper.

The view on the right

On top of the device, you will find the lonely 3.5mm audio jack sitting at the center. There's nothing but a mouthpiece at the bottom of the Xperia ion.

The 12MP camera and its LED flash light are located on the back. The loudspeaker grille can be found immediately below them. The green logo and Xperia letters at the bottom hark back to the Sony Ericsson heritage.

The SIM card slot and the microSD card slot are stealthily tucked in under a small cover, located right above the camera sensor. Removing it takes place by pressing with your thumbs on its sides and sliding up.

The home of the microSD and the SIM card slots

The 1900mAh non-removable battery of the Sony Xperia ion for AT&T achieved an endurance rating of 31 hours in our traditional battery test. This means that you can expect the Xperia ion to last you just a bit over a full day, should you use it for an hour each of telephony, web browsing, and video playback every daily. 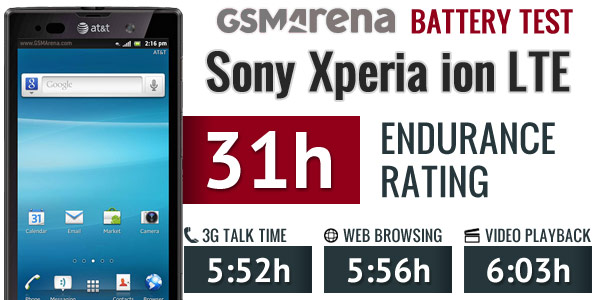 You can find out all about the battery performance of the handset in this post.

Handling the Sony Xperia ion is relatively easy for its size. Even one handed operation is possible on most occasions. The curved back allows the device to fit comfortably in hand, and reduces the risk of drops.

Overall, we'll give excellent marks for build quality of the Sony Xperia ion. Design on the other hand is strictly a matter of personal perception. Battery life could have been much better, but we are not surprised by the Xperia ion's showing on this instance - the combination of Qualcomm Snapdragon S3 with HD screen and LTE is a well recorded energy hog by now.

Following next is a look at the (ageing) software of the Sony Xperia ion.