This phone comes with one of the most luxurious boxes we've seen. The box itself is made out of thick plastic, which already makes it feel more special than regular cardboard packaging. The attractive red accent makes it that much fancier.

It gets even better once you open the box. The charger is not usual Quick Charge 2.0 we see in Snapdragon-powered chipsets, instead it does 9V @ 1.5A (a bit lower than QC2.0). However, the flat red USB cable looks amazing, definitely an attention grabber. Our favorite has to be the headset though.

It comes in a practical rubber circle that neatly holds the headset itself, but also the replacement rubber tips. The headset has red cables (the regular round kind), a single-button remote and in-ear plugs. It looks more expensive than the regular in-box headsets we're used to.

The ZTE Nubia Z9 measures 147.4 x 68.3 x 8.9mm, a bit tall for a phone with a 5.2" screen, but quite narrow too. A big potential problem is the weight, all 192 grams of it. It's not the heaviest phone ever, but the heavy weight combined with the fairly compact footprint of the phone add for a surprisingly heavy feeling. It's a handful, there are no two ways about that.

The basically non-existent side bezels of the ZTE Nubia Z9 make for a striking appearance when the screen is on, but the design is much more familiar with the screen off. Whether it reminds you of an iPhone 4/4S or an Xperia, the metal side filling in the glass sandwich is a fairly common design. Even the new Galaxy S6 uses the basic setup but its sides are not squared off.

It's all about that screen though. The IPS LCD measures 5.2" and packs 1,920 x 1,080px resolution, making for 424ppi pixel density. No QHD resolution here, but the extra pixel density is a bit controversial - to some it's just a marketing gimmick that doesn't warrant the toll on battery life.

The glass above the display is thick and beveled

We'll get back to the screen, let's focus on the protective glass above. There're no official claims to scratch resistance, you can tell by the beveled sides of the front glass. This bevel is essential to making the side bezels all but disappear, here's a diagram of what happens. The glass is 1.7mm thick and its bevel bends the light to cover the 0.8mm gap between the LCD and the actual edge of the phone. 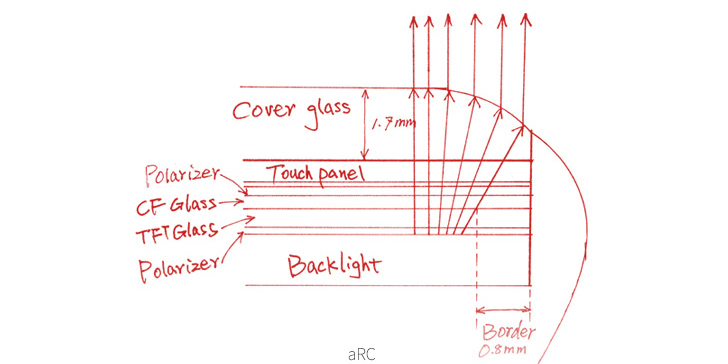 It's a really creative trick and it works quite well - looking at the phone dead on makes the bezel almost invisible. Still, bending light like that creates a slight prism effect and you can see a rainbow of colors on the outer edges left and right.

The back glass is thinner (glass is heavy and the Nubia Z9 is chunky enough as it is), so a layer of different material separates the back glass and the metal frame. The good news is that it's painted to match the color scheme of your choice - Black, White or Gold.

The Nubia lineup has characteristic red accents and they are a part of the Z9 as well. The Home button is a red circle, mirroring the red circle that surrounds the camera on the back. Around it are two small red dots - the Menu button (left) and the Back button (right).

You'll have to remember which is which as they are indeed just dots. After you get used to the layout you won't even notice their presence but it can be confusing at first. You can switch them around if you want.

The red circle is the calling card of the Nubia lineup, but the other two keys are ambiguous

Hardware controls continue on the right side of the phone. Starting from top to bottom there's the volume rocker, the power key and the shutter key. They are quite narrow and with the beveled edges on the side of the phone they can be a bit hard to find by touch.

The shutter key is a two stage button that can launch the camera even when the screen is locked. You can even set it to immediately snap a photo - a bit hard to aim while the screen off, but it's the only way to capture "blink and you miss it" moments.

The right side of the phone holds the other hardware controls: volume, power and shutter keys

On the opposite side is the card tray, which takes an eject tool to open. It holds two nanoSIM cards and not a single microSD card, not even instead of one of the SIMs. This leaves you with two storage options - 32GB on the Classic and 64GB on the Exclusive and Elite versions.

The other side is where you put up to two nanoSIM cards, but no microSD cards

At the bottom are two grilles, either side of the microUSB port. Only the right grille actually hides a speaker, while the left one covers the mouthpiece. The USB port features MHL 3 support so with the right TV (or right adapter) you can watch videos and view photos on a large screen.

The top side holds the secondary microphone (for noise cancellation and stereo audio capture) and an IR blaster so you can remotely control a TV too. A 3.5mm audio jack is provided for headphones, while an AK3861 chip on the inside promises great audio quality. We'll test that out in due time.

microUSB 2.0 port, speaker and microphone around it • other mic, IR blaster and 3.5mm audio jack

Around back we have the 16MP camera and its single LED flash. The camera is flush with the back (to be fair, the phone is thicker than most phones with a protruding camera). The back is sealed, giving you no access to the 2,900 Li-Ion battery inside.

The ZTE Nubia Z9 is quite heavy - we touched on this already and we come back to it as it affects handling. The metal side and glass panes offer little traction with your palm and the weight means you have to be extra careful not to drop the handset.

Don't be afraid to squeeze it though, even though you're touching the screen the Z9's software is smart enough to ignore it. In fact, it uses this as an advantage - you can unlock the phone just by squeezing its sides, among other similar gestures.

The Nubia Z9 is sturdy, but heavy and its glass and metal exterior offers little grip

Anyway, the phone feels very sturdy as it should with such a massive construction. This toughness doesn't protect it from cosmetic damage though, all that glass can (and will eventually) get scratched.