As we near the late August release of the Samsung Galaxy Note10 series we're bound to run into more and more leaks about it.

After a series of 3D renditions of the Galaxy Note10 Pro we now get a few images of a basic silicone case that's allegedly made for it.

The case seems to confirm all previous leaks and renders we've seen of the device. There doesn't appear to be a cutout for a 3.5mm headphone jack at the bottom, there looks to be a cutout for an IR on the top and the rear shows a vertical cutout for a triple camera as well as a separate cutout for the flash and likely heart rate/blood pressure sensors. 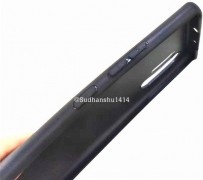 It will have 12GB of RAM and a triple camera on the rear with a regular, ultrawide and telephoto modules.

You're a troll. Read the other posts. It's not about how great Bluetooth is, it's about how useful a headphone jack is. Samsung used to know what it meant to differentiate, but now they've just become like everyone else....namely, Apple. I haven't...

I was looking forward to this phone, but no headphone jack might make it a deal breaker for me. I hate having something extra to charge like Bluetooth headphones or worrying about keeping track of a dongle.