The Apple iPhone 8 might be one of the most expensive flagships out there, but there's nothing in the retail package to suggest that. Inside you'll find the standard-issue 5V/1A charger, a Lightning cable, and a pair of EarPods. The Lighting-to-Analog jack adapter completes the tally.

The iPhone 8 measures 138.4 x 67.3 x 7.3mm which is almost a centimeter taller than the 4.6" Sony Xperia XZ1 Compact we recently reviewed. Size-wise, the iPhone 8 is pretty close to the iPhone X league, but that's an entirely different bezel-less league and an even higher price bracket.

Just like the iPhone 8 Plus, the iPhone 8 has grown 0.2mm bigger in each direction making old cases barely fitting. It has gained some 10g as well to tip the scales at 148g.

Apple iPhone 8 sized up to the iPhone 7

One look and you know it's an iPhone. Whether it's a glass or metal at the back, the signature design is sticking around for a fourth consecutive, though probably final, year. Overused though it may be, it still has the sort of appeal that draws millions of returning users around the world. 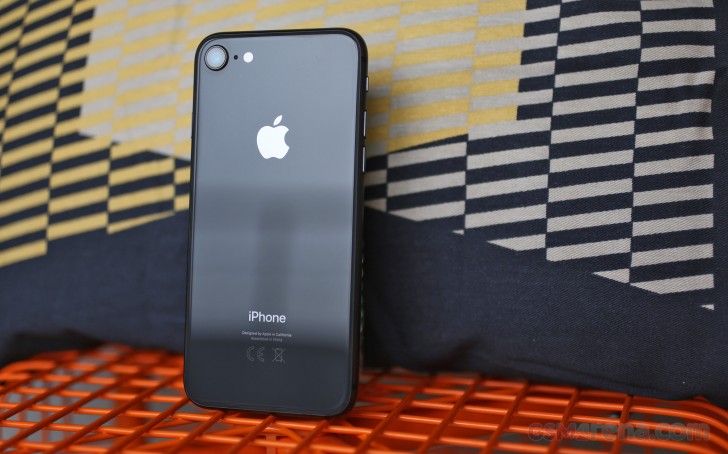 Yes, Apple was among the first to introduce a dual-glass chassis with the iPhone 4 and yes, it's among the last to put it back in circulation. The long overdue redesign has finally enabled wireless charging getting rid of the antenna strips in the process.

The iPhone 8 is a familiar sight head on. Relatively big bezels for the screen in between and the signature Home key with Touch ID. The glass is said to be tougher than before but it's not something you can spot, so nothing has really changed at first glance. 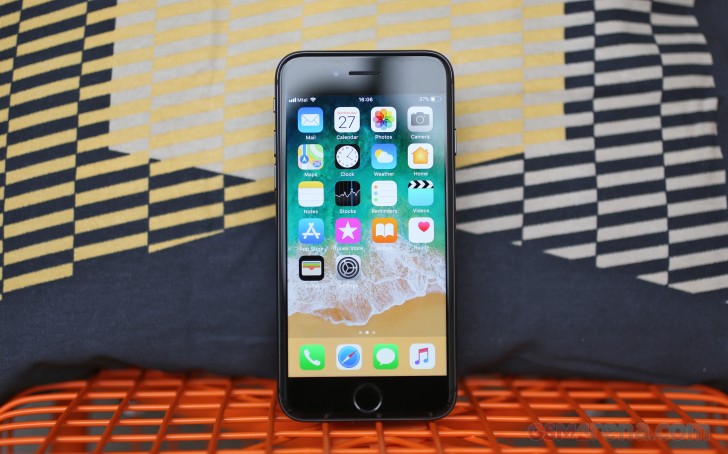 Flipping the iPhone 8 over you are already in new territory. The full glass back is gorgeous in spite of somewhat washed out black paintjob. Whether it was an intentional effect, or a failed experiment, the new Space Gray is nothing like the old one. We actually like it but think it won't be everyone's cup of tea.

Both sheets of glass have subtle curves but end rather sharply into the aluminum frame. This boosts the grip without hurting the looks. It also (probably) makes it easier to apply screen protectors. 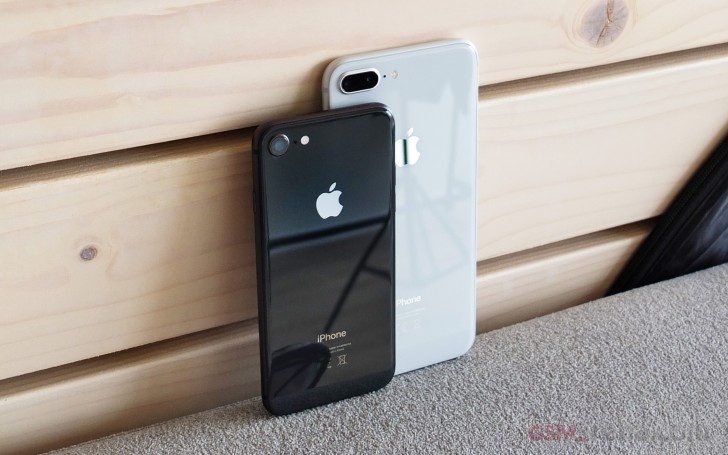 The frame is made of rigid Series 7000 aluminum with a sort of sandblasted finish giving it some scratch and fingerprint resistance. The two glass panels are secured along the edges with the frame supposed to absorb some of the shocks of impact.

As various drop tests have revealed, the iPhone 8 series isn't as tough as Apple is making it out to be. It's not that the 8 is more fragile than the competition, it's just the wrong impression you may get from Apple's publicity. The 8 is a glass phone after all, and it will crack or break if you drop it hard enough, simple as that. The glass on both sides didn't live up to the scratch-resistance promise either - small objects of metal (like the camera of another iPhone) can leave prominent enough marks. At least the oleophobic coating seems to be efficient against smudges, compared to other glass smartphones.

Back to the rear panel, the new 12MP sensor is sitting behind the same f/1.8 lens and is accompanied by a quad-LED dual-tone flash now capable of slow sync. It's bulging, alright, just as it was on the 6 and 7 series. If you put a case on it, it gets leveled out nicely. 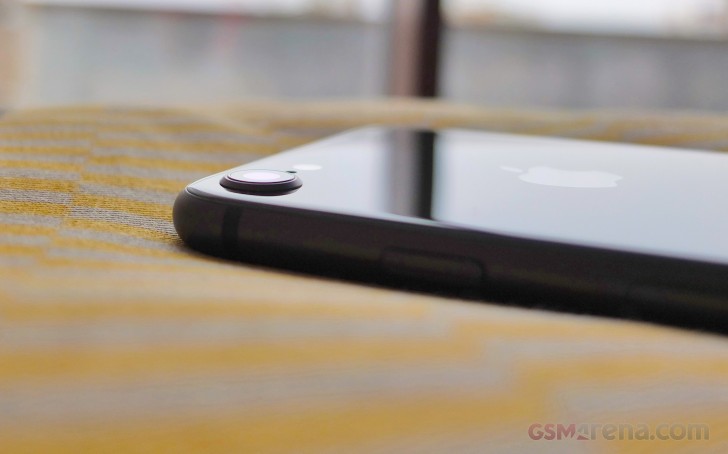 The iPhone 8 looks a lot like its predecessor but has a new, arguably better feel in hand. It's equally, if not more premium than before, quite compact and manageable. Scratch-resistance might be less than stellar, but the build is solid and waterproof. The size could very well be the sweet spot for the majority of people as millions of units sold bear witness, in spite of the amount of bezel relative to the screen diagonal. Now, the iPhone X will probably put things into an entirely new perspective.

Above the 4.7" display, the earpiece also acts as one in a pair of stereo speakers, the FaceTime camera and a couple of sensors also around.

Below the screen is the 3D Touch-enabled Home key complete with a fingerprint sensor.

The silent switch and the volume controls are on the left side as always, while the power key and the SIM slot are on the right.

There is nothing on top of the iPhone 8. The bottom has the Lightning port, the mouthpiece, and the second speaker.

The top of the iPhone 8  the bottom  the Lightning connector

Finally, the 12MP camera sensor is bulging at the back. The quad-LED flash is next to it.