The iPhone SE is a perfect fit for a time-saver review, it seems, as Apple didn't come up with a new design or new internals. Instead, the innards come from an iPhone 6s, while the design is a direct copy of the iPhone 5s. While on paper this sounds like a great combination, it's not exactly breaking news, is it?

One way to interpret this move is to conclude Apple is taking the easy road and is merely recycling an existing chassis design to produce a lower-cost iPhone without hurting margins. Another possible interpretation is that they are reviving the iconic iPhone 5/5s design in an attempt to cater to a group of users who not only want a cheaper iPhone but would also prefer the smaller form factor.

Let's not forget that a third of Apple users are still using older 4-inch smartphones.

The iPhone SE has this nice nostalgic feeling of the good old iPhones when they were always shaking the market, and its compact size and powerful hardware will be appreciated by many. It will hardly attract any new users to Apple's platform, but will allow those who are stuck in the past to level up.

The Apple's iPhone SE design is on the catwalk for a third time in a row, and there are no surprises here. After the dawn of the glass iPhones, the new metal chassis introduced by the iPhone 5 quickly became a fan-favorite. It was in fact so popular that in the aftermath of the iPhone 6 premiere the new exterior was considered as a disappointment because of the departure from the old looks. 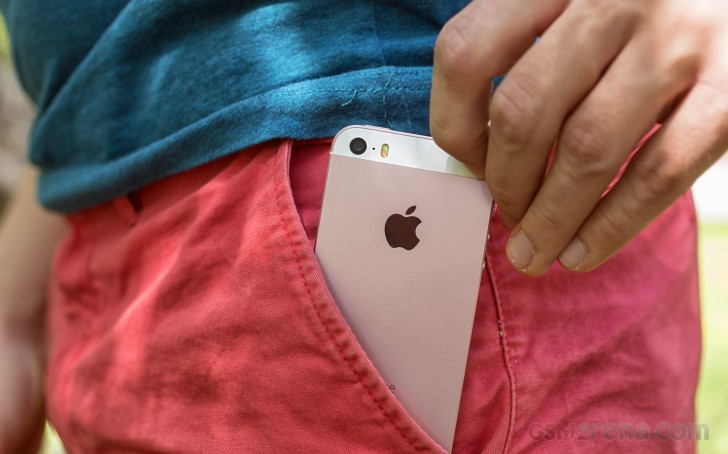 Sure, Apple could have shrunk the iPhone 6 chassis for the iPhone SE instead, but we suspect they've intentionally decided to keep the iconic chassis. Plus, nobody can't argue it was easier for development and production - faster, and, of course, cheaper.

On a positive note - keeping the flat sides is a tremendous boost to the grip and overall handling, both of which were compromised by the rounded edges of the iPhone 6 generation. The iPhone SE still feels great in hand as it was three years ago, premium as ever.

The iPhone SE rendition of blacks is brighter than we would prefer, but on the other end of the spectrum, the 600 nits worth of brightness level is quite appreciable. The resulting contrast of 1:804 is not as noteworthy mainly due to the poor black levels.

Regarding color rendering, the iPhone SE scored excellently with an Average DeltaE of 2.3, which means an almost perfectly calibrated screen. The maximum deviation of 5.2 is in the whites which come out slightly bluish but it's not something you would notice without an external reference point.

The iPhone SE posted very balanced score across all of our tests - it can do about 12 hours of 3G calls, 13 hours of web browsing, or 14 hours of video playback on a single charge.

We also put the loudspeaker performance of the new iPhone SE to testing. The audio quality is uninspiring - worse than the iPhone 6s - and the sound is queiter. The speaker loudness is almost the same as on the iPhone 5s. This means you should keep a close eye on your phone in noisy environments, or missing calls is a real possibility.

As for the audio quality through the 3.5mm audio jack, the Apple iPhone SE takes after the iPhone 6s, sharing its less-than-stellar stereo quality with an active external amplifier.

All the other readings were great though and with the volume levels sitting comfortably above average it’s a solid performance.

The iPhone SE utilizes the same 12MP imager we saw on the iPhone 6s generation with F/2.2 aperture and dual-tone flash. The front camera, unfortunately, is the same as on the iPhone 5s - a 1.2MP shooter. The powerful chipset and the 12MP sensor also allows the iPhone SE to capture 4K video recording.

The resolved detail is good, but it's not dramatically better than what the iPhone 5s and 6 offered, and not on par with the current crop of flagships. The post-processing is rather heavy-handed - as noticeable in the sharpening halos and the prominent noise.

The 4K videos are slightly less processed than still images - there is some noise, but less over-sharpening while the detail is decent if not quite class-leading. Dynamic range is once again impressive and the frame rate is pretty steady, but the mono audio is disappointing.

The 1080p videos at 30 and 60 fps are great - well-stabilized thanks to the software stabilization, with great amount of detail, fine colors, steady framerate and superb dynamic range. Once again - the audio is just mono.

Apple iPhone SE runs on the iOS 9.3 out of the box, though there is already a 9.3.1 bug-squashing firmware update. The new phone lacks 3D Touch hardware, so some of the major features are missing from the OS. 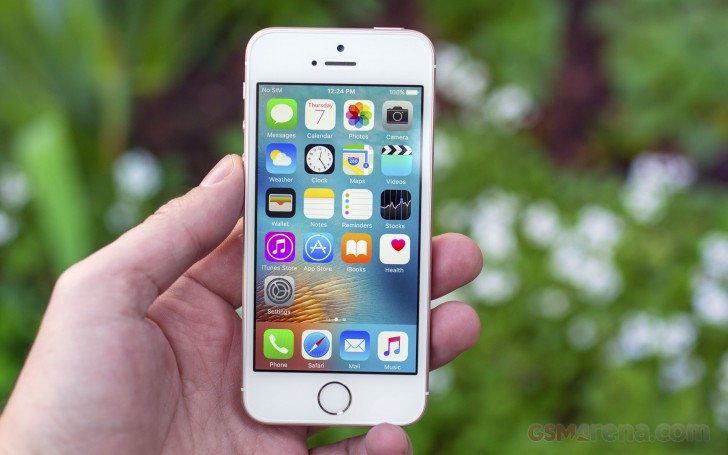 The latest Apple iOS 9.3 brings the new Night Shift mode and an enhanced Notes app while it was iOS 9 that introduced the new News app, and public transit support for Maps. Mail and Messages got a refresh, and there's a new system font. Meanwhile, Siri got smarter while Spotlight Search expanded its reach.

Siri got smarter, too. In addition to all the cool stuff the intelligent assistant could do before, it can now search through your photos and videos based on dates, locations and the album names.

We can certainly say that iOS 9 feels adequate on the 4" display, but once you've experienced it on the larger models, it's hard to go back.

The iPhone SE may come with dated looks, but its hardware is up to date. It is powered by the latest Apple A9 chipset, which packs a dual-core 1.84 GHz Twister processor, PowerVR GT7600 six-core graphics, and 2GB RAM. And we believe the A9, coupled with the lower (than iPhone 6) resolution screen would be a monster.

We knew the Apple A9 is a beast since we first saw it running on the iPhone 6s. There is no surprise it's a flagship-grade chipset and it delivers on all fronts. Apple's choice of designing its own processor pays out every year and makes sure iOS users never have to worry about lackluster performance.

The Apple A9 has the power to handle everything you can get on your phone today and is future-proof for years to come with some huge power reserves under the hood.

There is no conspiracy behind the iPhone SE - it's what the fans wished for, and what the critics love to hate. It's always been this way with Apple - polarized opinions versus massive sales.

The iPhone SE is an iPhone like any other iPhone. It has top-notch hardware, all the latest camera capabilities, and runs on the latest iOS with everything but the 3D Touch gestures. The only thing that puts us off is the old selfie camera.

I like the phone. The phone is okay and the camera is very good 👌