The display possesses what's become known as Retina-grade 323ppi density and indeed, everything is tack sharp. Viewing angles are equally good, with no loss of contrast or color shift to speak of. The screen is rather reflective though, and quite prone to smudges. 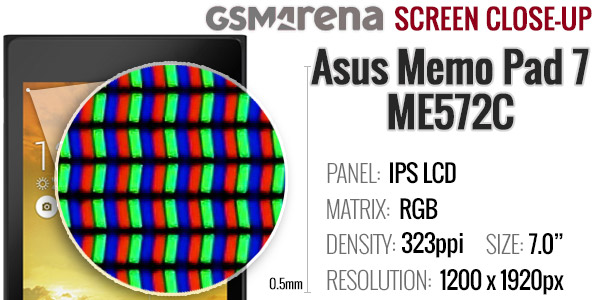 Asus has also provided the Splendid app that allows the users to tweak their display colors to their liking.

We ran our usual test routine on the Memo Pad 7 and it aced it. The maximum brightness level is the highest we've seen on a tablet, save for Asus' own Transformer pad TF701T from two years ago, if you can even call that a tablet. The Sony Xperia Z3 Tablet Compact barely manages to compete with the Memo Pad 7, and the rest of potential rivals are far behind.

The black value is somewhat high which prevents the ME572C from snatching the top spot in contrast, but a score in the 1100s is still an excellent achievement.

Our tests revealed that the 50% setting is actually more like 25%, which has become a common occurrence among smartphones and tablets alike. Contrast ratio is solid at this setting as well.

The sunlight legibility of the Memo Pad 7 suffers somewhat from the reflective screen coating. The high brightness, however, maintains text clearly legible even in direct sunlight. Which is not to say that you should deliberately hold the tablet with the sun mirrored towards your eyes.

The battery in the Memo Pad 7 ME572C is the same 3950mAh unit as in the ME176C model, which has less than half the pixels of the currently reviewed unit. That said, the ME176C posted great scores in our dedicated battery test.

The Memo Pad 7 ME572C showed excellent longevity in the web browsing routine with just shy of 12 hours, actually beating the ME176C by close to an hour. Video playback turned out more taxing on the battery, but 10 whole hours is a very respectable score nonetheless. 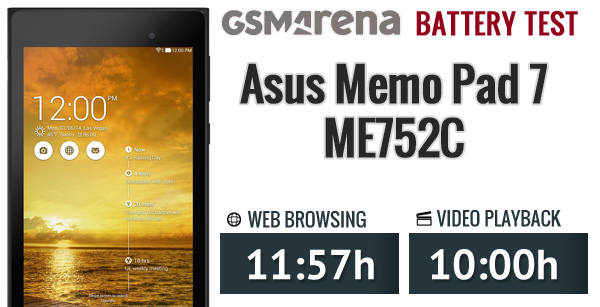 The Asus Memo Pad 7 ME572C we are testing is a Wi-Fi only device. There is a 4G version as well, for those of you, who require autonomous surfing capability.

There's a microUSB 2.0 port for charging and wired data connectivity and USB OTG support so you can mount external drives.