Asus should have opted for a better name for Memo Pad 7 ME752C that sets it apart from the rest of the company's tablets, because on paper and in real life the slate is truly impressive.

The beautiful screen is its key selling point and it is simply a pleasure to behold. This 7 incher is sharp, bright, with great viewing angles and accurate colors, which you can even tweak if you feel like it. 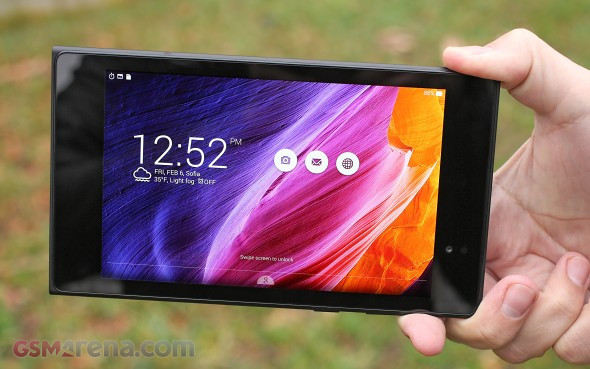 The device is finely crafted, the plastics are of high quality and the body doesn't show any tendency to bend, creek or rattle. It's a quietly stylish design that works very well.

Here's the summary of the key test findings in this review:

The market is filled with compact tablets with 7-inch screens from major brands and unknown manufacturers alike. Even so, finding such a comprehensive package in the price range of the Memo Pad 7 ME572C proves a difficult task. It's currently priced at €200/$200 for the 16GB version and that severely limits the list of competitors. Not that there were many to start with, featuring a FullHD resolution at this screen size.

The Asus-made Google Nexus 7 (2013) is where the roots of the ME572C lie and the resemblance is obvious. The Google branded offering retails at around the same price as the Memo Pad 7 in some markets, but is a good €60/$70 more expensive elsewhere. Not to mention it doesn't have a microSD slot. The display on the Nexus 7 is equally good, RAM is the same 2GB, but the chipset is showing its age, and can't really compete with the Atom ticking inside the Memo Pad 7. The Nexus badge does promise timely Android updates, though.

A top rival of the Memo Pad 7 ME572C is the Xiaomi Mi Pad 7.9. That is, if you can get your hands on one, as its availability is largely limited to the Asian market. It's a step up from the Asus offering in every respect, while its list price is the same. Exporting a Mi Pad 7.9 outside of China, however, quickly brings the price up by as much as 50%, and the matter of warranty and support remains to be considered.

The Nokia N1 packs an even more powerful Intel Atom Z3580 paired with the same PowerVR G6430 GPU and 2GB. The display is again a 7.9-inch IPS panel with a 1536 x 2048 pixel resolution, just like the Xiaomi. The price is somewhat higher at $255, but the real issue is that the tablet is only available in China for the time being.

Another region-specific option is the Kindle Fire HDX. The Amazon slate comes with a similarly powerful Snapdragon 800 and 2 GB of RAM and its screen is the same in size and resolution. It's actually somewhat cheaper but at the cost of running a heavily customized Android build and the lack of a microSD slot.

With the Memo Pad 7 ME572C Asus has managed to come up with a truly compelling compact tablet offering. It has a wonderful display, it performs well and is attractively priced. Its only major shortcoming is its poor camera so if tablet photography is important to you, you might want to look elsewhere.