The Asus Memo Pad 7 ME572C comes with a custom Gallery app with decent functionality. It defaults to an album view where your camera roll sits at the top with thumbnails that flip through the entire camera folder. Below them you get thumbnails of your other albums, two in a row, which you can't resize. Once you're in the album of choice, thumbnails can be resized from one to six in a row with a pinch gesture.

The available features when viewing a single image are pretty standard - set image as wallpaper/contact image, share it, delete it, enter edit mode or just get more info.

The integrated editor offers various effects, frames, tools (crop, mirror, straighten, rotate, fisheye, doodle) plus light adjustments that let you bring out the shadows or the highlights. You can have multiple versions of the edited image and compare the applied effects among them.

The Memo Pad 7 video player has a very basic interface with none of the nifty extras like subtitle support, equalizers, or playback speed that you'll find on more mainstream launchers. It features just a playback slider, a play/pause button, and an orientation switch. A lone sharing button sits at the top.

The built-in video player only managed to play MPEG4 files, and failed when faced with Xvid and DivX movies. It's a codec support issue, likely. You can always resort to installing a third-party player.

The Asus music player does decently in terms of functionality, covering all the basics. It has a large Now Playing window with prominent album art, and also has integrated bass boost and surround sound options, although both of those only work with headphones. An equalizer is also available with multiple presets and a single custom setting.

You can also sync Cloud services like Google Drive to stream your music collection without having to transfer it to the tablet, and you can also playback from local media servers.

We ran our traditional loudspeaker test on the Asus Memo Pad 7 ME572C and it posted an Average result. The stereo speakers provide adequate sound, and truth be told, few tablets excel in this test.

The Asus Memo Pad 7 ME572C did well in our audio quality test although it hardly broke any records. The tablet had perfectly clean output when connected to an active external amplifier and garnished it with reasonably high volume levels. It's not the loudest out there, much less in the tablet division, but it's good enough so the vast majority of users will never know the difference.

Plug in a pair of headphones and things start to go south though - most of the readings are still good, but stereo crosstalk creeps in as well as some intermodulation distortion. Frequency response starts to fluctuate a bit as well and with volume levels also dropping, the performance here is above average at best. 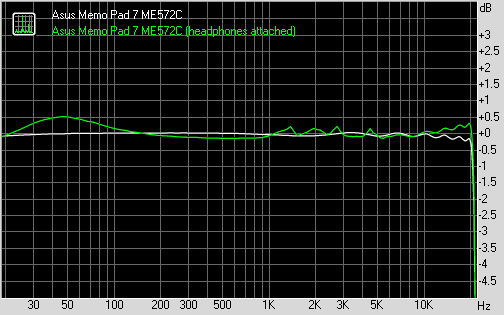