The dual-glass design is not going anywhere anytime soon, but we are glad makers have found a way to freshen it up. Huawei was one of the first to mix different colors and it keeps delivering with each new smartphone, be it Huawei or Honor brander. And the Honor 20 is as captivating and mesmerizing as its Pro sibling. 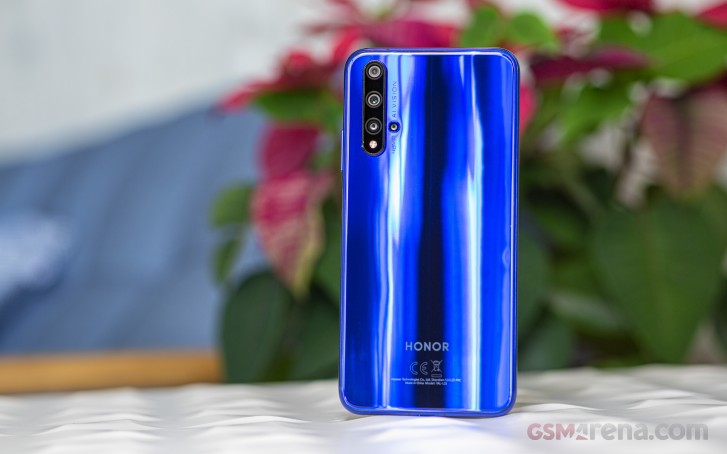 The familiar premium build is here to stay for the Honor 20, too. It's a glass-sandwich design by the book - meaning two strengthen pieces of glass on each side and aluminum frame to hold them together. Huawei and Honor rarely mention the glass maker, though quite often it is Corning, so we have lots of reasons to believe the Honor 20 series might be featuring Gorilla Glasses above the screens. There is no official word though, so it's just a hunch.

Anyway, the Honor 20 is not your typical smartphone with the punch-hole camera giving it away. Maybe this will become widespread soon enough, but for now just few phones have it, and it stands out as a cutting-edge design solution. 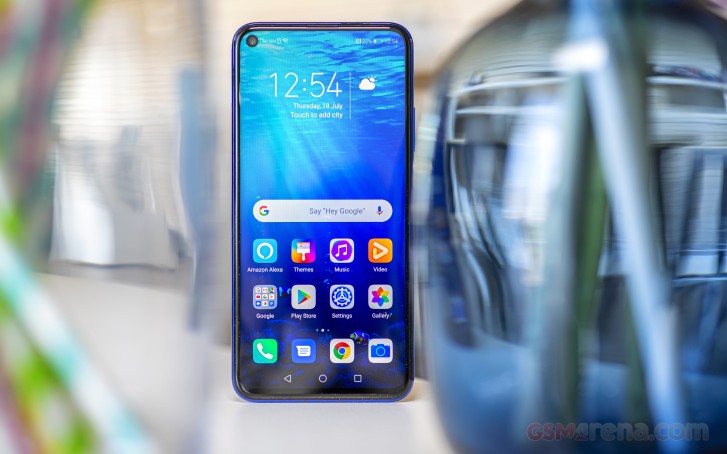 So, the front is all about that 6.26" IPS LCD screen with a punch hole for the selfie camera. It seems bezel-less at first but looks are deceiving as there is the well-familiar chin that hides the display controller. It is usually thinner with OLEDs, but rather impossible to avoid with LCDs. We don't really mind it though, as it helps avoiding ghost touch issues with your palm when holding the phone in portrait orientation.

The hole for the camera is at the top left corner and is one way to avoid a notch. It is still a screen cutout and can be an eye-sore when watching movies or playing games but isn't as obtrusive as an iPhone X-like notch. 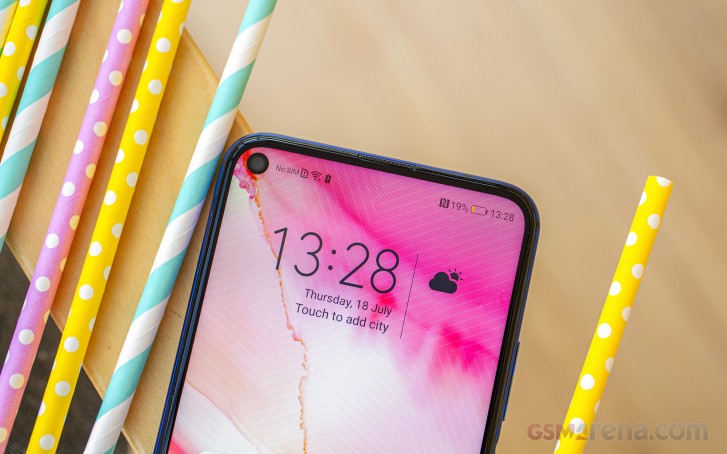 The earpiece grille is quite thin, above the screen, and it hides a tiny notification LED. It can flash in green and red only, but it's there and we appreciate it.

The Honor 20 has an aluminum frame with matching color to the back and glossy finish. It's a bit curved and the grip is not terrific, while the slippery glasses on both sides aren't helping either. The frame is busy across the board, though. At the top it has an IR blaster, the bottom is where the USB port and speaker grille are, the dual-SIM tray is on the left, and finally, the right side has the volume rocker and the side-mounted fingerprint scanner that also doubles as a power/lock key. 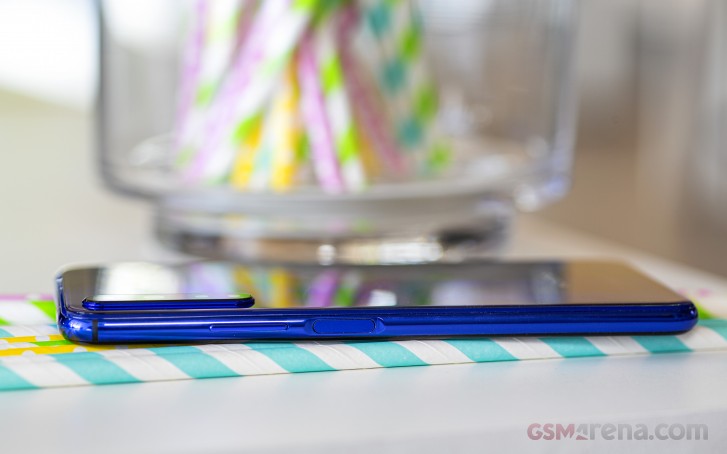 The fingerprint scanner being on the sides isn't an unusual thing and you should not have any issues with it. The sensor is always-on, blazing-fast and with superb accuracy. And if you click it, it provides a rather nice feedback.

Moving on to the back, it's a stunning look right away. The so-called Dynamic Holographic glass from the Pro is also on the regular Honor 20, but not in the same hues, which is a nice touch. We have the Sapphire Blue version here and it's a beauty. Honor achieves this nice effect by using three layers during manufacturing - one color, one glass and one depth layer with millions of tiny prisms to diffract light. And voila, you have this mind-bending view. 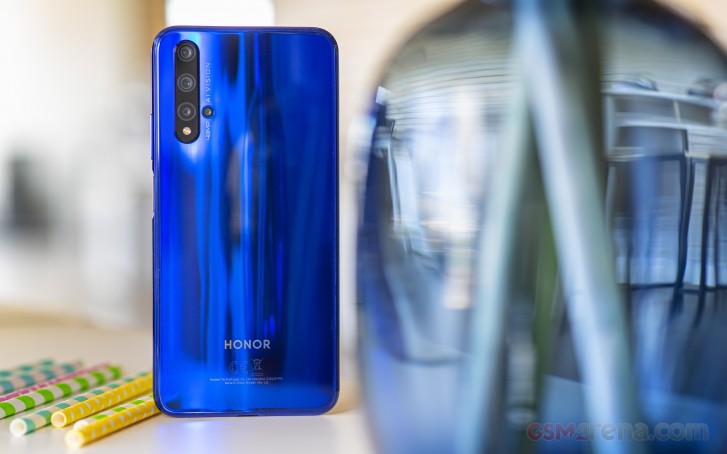 It comes at a price though. The glass is very slippery and is a massive fingerprint magnet. After five minutes with the Honor 20 and the stunning looks get ruined by smudges. So, if you want to keep the beauty pure, a regular polishing is a must.

The back is where the four main cameras are, three of them found on a huge hump. It is bulging quite a bit and the Honor 20 wobbles a lot when put on a desk or table. 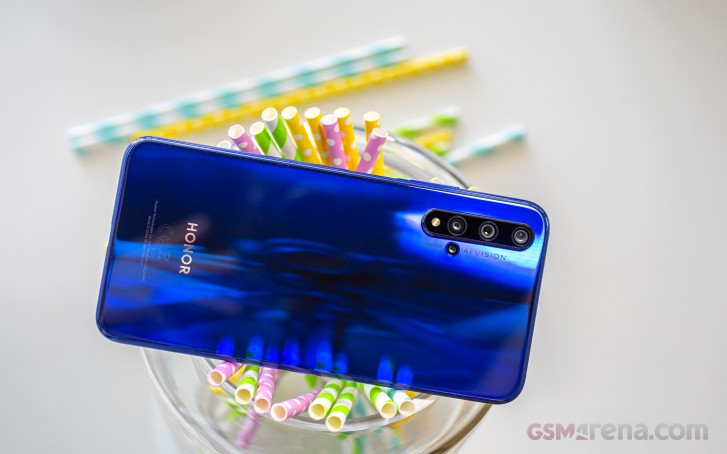 Then outside the setup is the dedicated 2MP macro camera, same as on the Pro model. 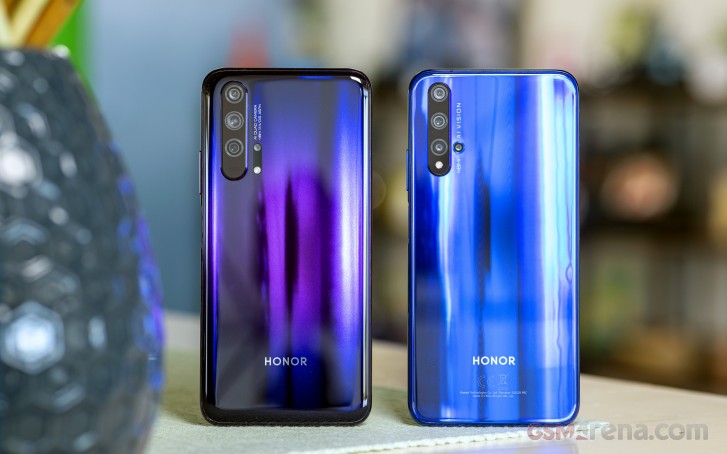 The back glass is completely flat, which adds to the list of differences with the Pro model that had rounded edges around the longer sides. It's a minor thing, but one that makes the grip on the Honor 20 a little bit better, imagine that.

So, the Honor 20's looks are worthy of a flagship, no two words about it. It is slippery, sure, but that's the deal we often make for having such design. A case is always an option, of course, so it is an easily resolvable issue. With these dazzling colors and punch-hole camera at the front, the Honor 20 is easily recognizable, and we think Honor did a great job designing the phone.