The HTC One Max has been waiting for this test. With larger pixels and wider aperture - f/2.0 vs. f/2.2 - it should have a noticeable advantage even without the help of OIS. We'll start off with still photography - we took several photos with each and picked out the best and the worst.

With the flash off, the HTC One Max manages to catch up to the Samsung Galaxy Note 3 in terms of resolved detail, it even has a slight edge. Its white balance isn't quite as accurate (the wall behind the mouse is white), but it is more reliable as its worst shot is noticeably better than the worst Note 3 photo. The lack of OIS hurts the One Max though, the worst HTC One shot would have suffered less from handshake. 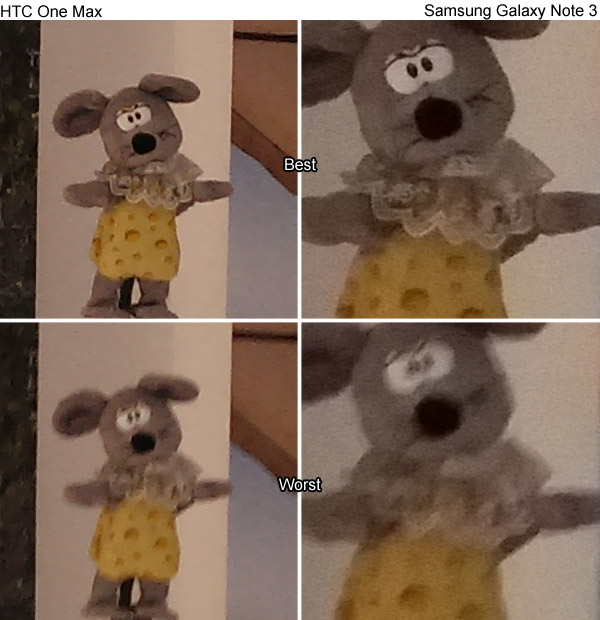 Here are the full resolution photos for your viewing pleasure.

We enabled the flash and took a few more photos. The HTC One Max flash is weaker than that on the Galaxy Note 3, but with it the white balance improved, the amount of detail went up and the One Max became more reliable with practically no difference between its best and worst shot.

The Samsung Galaxy Note 3 recuperates a bit from the less than stellar showing in the previous test and its reliability went up as well (though the worst shot is still noticeably softer). The higher resolution of the Note 3 allows it to capture a bit more detail than the One Max here, but the difference is quite minor. 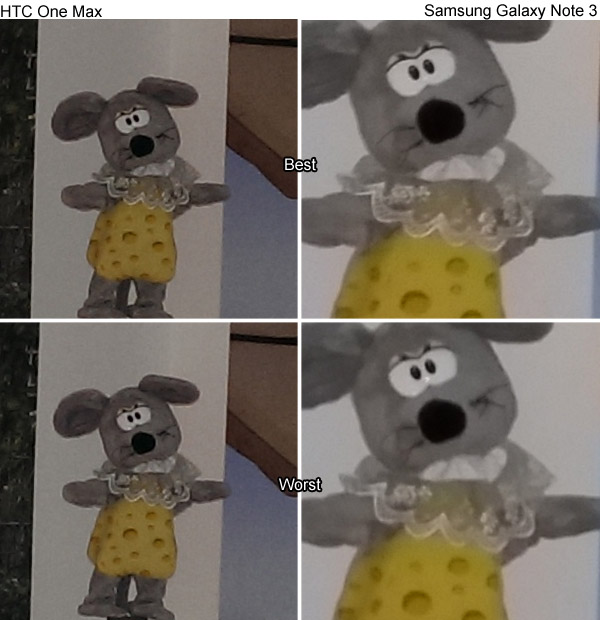 And here are the full resolution shots for this test.

The advantage of the HTC One Max in low-light carries over when it comes to shooting videos and in this case it's even more pronounced. Note that these videos were shot on a tripod with no light (not even the LEDs).

The One Max videos are a bit dark but capture detail like the texture in the "sky" behind the Ferris wheel, the wooden planks behind the sign and the grass. This detail is completely lost on the Galaxy Note 3 in both 1080p and 2160p modes. In the dark, there's no benefit of shooting 2160p with the Note 3 - it wastes space without adding more detail.

The HTC One Max even manages to pull off more accurate color rendering and better contrast - the Note 3 videos have low contrast and poor colors. 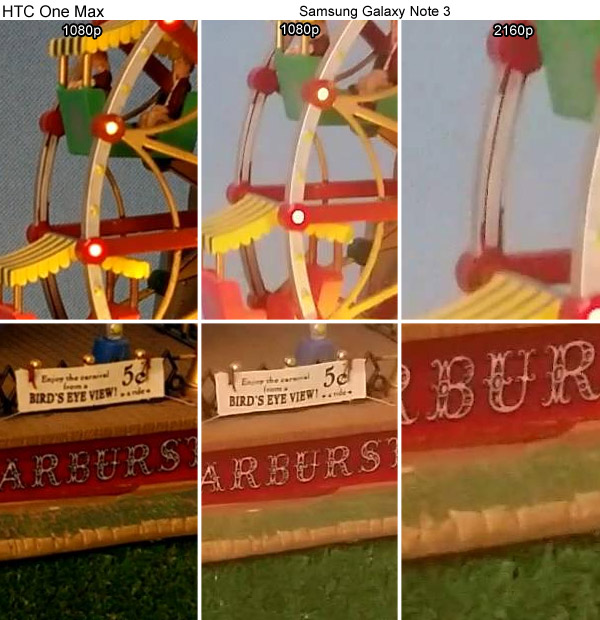 Winner: HTC One Max. This would have been a more definitive win with OIS, but the One Max still proved more reliable for stills and captured noticeably better video in the dark.