The HTC One Max uses the company's UltraPixel camera but just as any device with it other than the HTC One, it lacks optical image stabilization (OIS). The Samsung Galaxy Note 3 packs a 13MP shooter with no OIS either.

In the past we've seen that in good lighting conditions the large pixels of the UltraPixel camera make little difference (even the OIS of the HTC One as shutter speeds are very fast). So the three-fold resolution advantage of the Galaxy Note 3 should give it a massive advantage.

Before we get to that, we should mention that the HTC One Max does have an advantage in field of view (FoV). The Note 3 (like the Galaxy S4) doesn't have the widest camera around, so the One Max photos are noticeably wider. 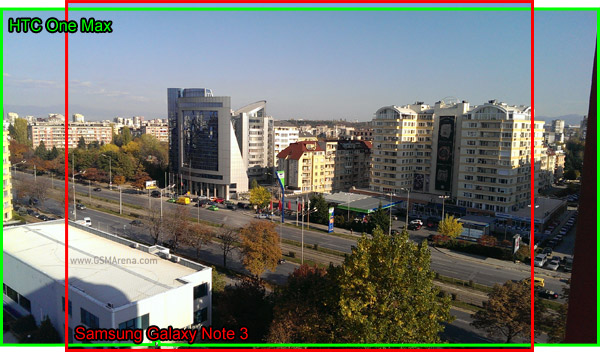 Keep in mind that the wide FoV brings a penalty to fine detail as fewer pixels are available for a specific part of the scene.

The 4MP resolution of the HTC One Max camera just isn't enough for fine detail like the tiles on the roof, the foliage and the small print on the sign. Even the relatively large fire escape staircase is a blur. You can also see that there's noise in the sky and in the shadows, which further brings the amount of resolved detail down. The point of large pixels is that they are worth several small pixels, but noise really gets in the way of that. You can also see oversharpening halos and traces of purple fringing.

The Samsung Galaxy Note 3 has a clear advantage here. The dynamic range of its camera is slightly wider, we'll see that more clearly in the HDR tests. But the Note 3 also has advantages that don't relate to resolution - its color rendering is more accurate than that of the One Max. Both go for a warm white balance, but the Max goes a bit too far. 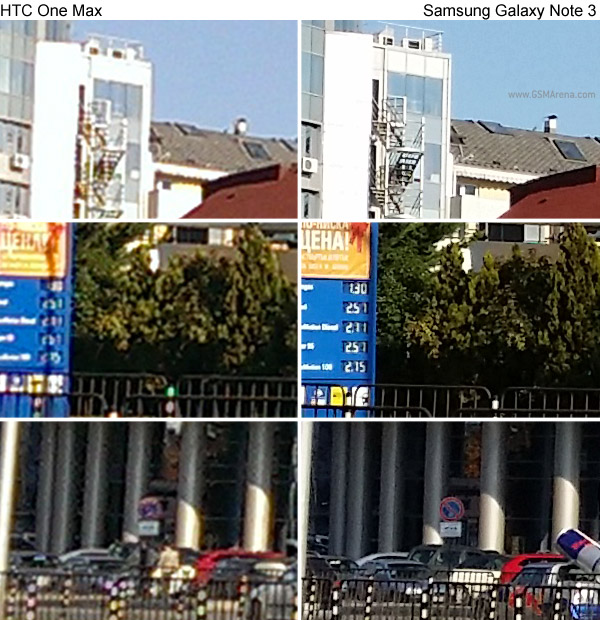 The Samsung also handles the sun reflecting off the glass building better, without providing any less detail in the shade. 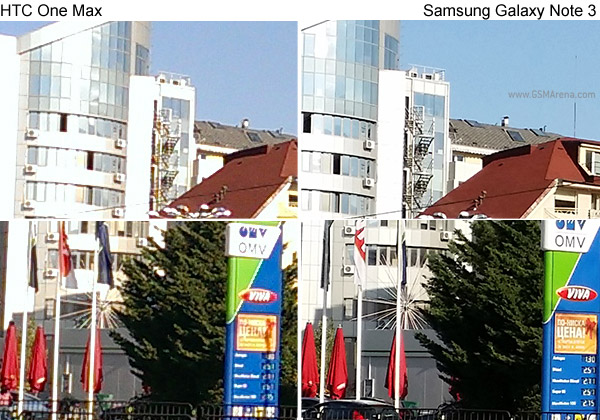 But don't just take our word for it - here go the full resolution samples so you can do your own comparisons.

Let's look at the HDR modes of both phablets. With the sun so low in the sky (as it is this time of year) it can be quite hard to get a good shot without HDR - either the sun shines directly into the lens or it reflects too much of neighboring buildings.

As you can see from the crop below, the thin metal skeleton of the crane starts to get lost in the glare in the HTC One Max photos. Flipping the HDR switch actually makes the matter worse - HDR on the One Max is not good at highlights. It does improve shadows, but it goes overboard for our tastes - too much dynamic brings contrast down and makes images look unrealistic.

The Samsung Galaxy Note 3 does a better job of rendering the crane without HDR and with the mode enabled it actually starts to bring it some of the clouds. The shadows are improved a bit but not much. 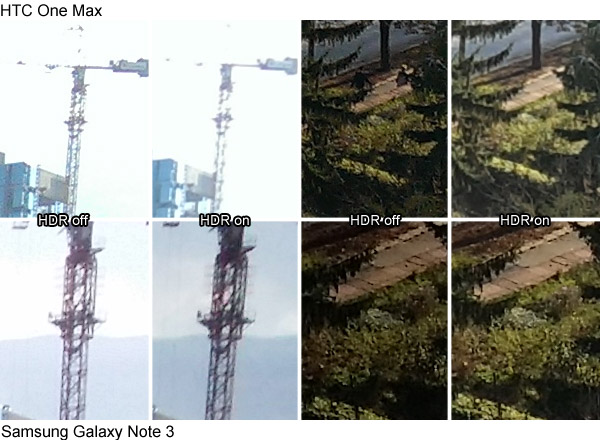 Another feature we tried was Sweep panorama. The Samsung Galaxy Note 3 produces huge panoramas with a whopping 60MP resolution and tons of detail and is quite wide - wider than 360°. Stitching artifacts are rare unless there are moving objects.

The HTC One Max manages 13MP resolution, but the panorama isn't as wide and there are more stitching artifacts visible.

Speaking of panoramas, the Galaxy Note 3 can shoot spherical panoramas too (identical to Photo Spheres and Google Street View).

The HTC One Max does have Zoe, a special mode that captures several full-resolution shots along with 3 seconds of video. Later these images and video can be used for some editing (e.g. object removal) and are automatically stitched into "highlights" - clips that show off your photos of a specific event (automatically grouped by time and location).

The Samsung Galaxy Note 3 has no Zoe alternative, but has more options as a whole. It can capture audio to go with the photo, create animated GIFs plus some clever extras buried in the settings (e.g. using another device as a remote viewfinder).

Winner: Samsung Galaxy Note 3. We didn't expect anything different really - the UltraPixel camera strength lies in low-light shots. In good lighting conditions the Galaxy Note 3 is one of the better cameras as we saw in our 6-way camera shootout. Also, it does better HDR and panorama and has more fun features to play with.

The HTC One Max produces decent photos to show on your HDTV or post on Facebook, but cameraphone fans will find plenty of faults with it.