The HTC One Max camera once again has the wider FoV, which again works a little bit against it when it comes to fine detail. 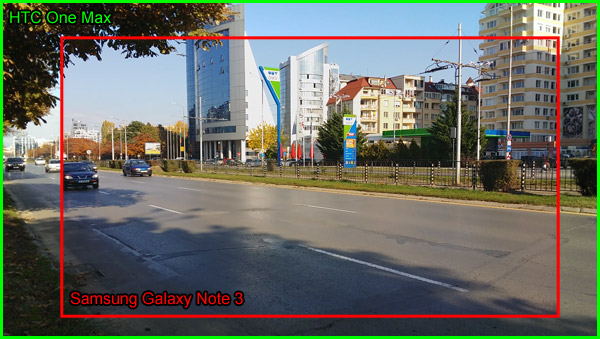 The end results are strongly in favor of the Samsung Galaxy Note 3. Even in the 1080p @ 30fps mode, the Note 3 manages to capture more detail than the One Max whose videos look too soft for FullHD. Then, of course, the Note 3 pulls the 2160p ace and completely trumps the One Max's video quality. Note that bitrate climbs up to almost 50Mbps, so 2160p videos can eat up your storage pretty quickly.

Color rendering on either isn't particularly accurate, but the Note 3 has a slight advantage. The One Max also overexposes the shot, perhaps due to the narrower dynamic range we saw in the still camera. We do have one criticism for the Galaxy Note 3 and it's that the continuous autofocus triggered a bit too often. 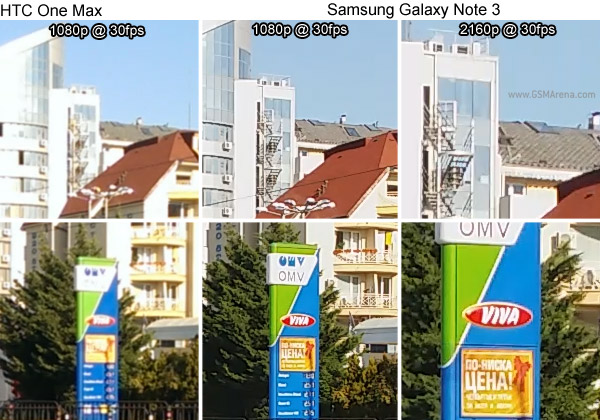 The Samsung Galaxy Note 3 has one very impressive feature - 4x zoom in 1080p mode. It's almost as good as that of the Nokia Lumia 1020 despite the Galaxy's sensor not having nearly as many pixels. Here's a video demo of the zoom.

Obviously the quality drops when you enable HFR. In the Note 3 videos you can see less detail and noticeable aliasing. Still, we kept the 1080p @ 30fps crops from the HTC One Max to see how it stacks up against the Note 3's 1080p @ 60fps.

The HTC One Max manages to resolve even less detail than before in no small part due to the lower resolution, but the end result just isn't a very good 720p clip. The Samsung Galaxy Note 3 quality has dropped compared to its 30fps mode, but it still retains more fine detail than HTC One Max's 1080 @ 30fps video, which is pretty impressive. 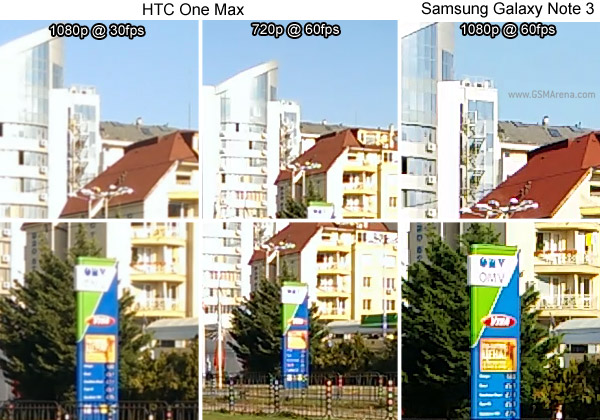 Winner: Samsung Galaxy Note 3. The Galaxy phablet convincingly beat its opponent in every test here. Add the higher-resolution HFR video plus great video zoom and you get one of the best camcorders around, in daylight at least.

The HTC One Max video recording prowess is just no match for the Note 3.