The two phablet titans were built by established electronics companies with very different development cultures. Samsung has found its place with the "throw everything at the wall" approach, while HTC is more restrained when it comes to adding new features, but is more willing to go off the beaten path.

That said, the HTC One Max disappointed slightly as it is a bigger HTC One - we expected the extra size to allow for some upgrades, but all we got is a microSD card reader and a fingerprint sensor (losing the camera OIS along the way). 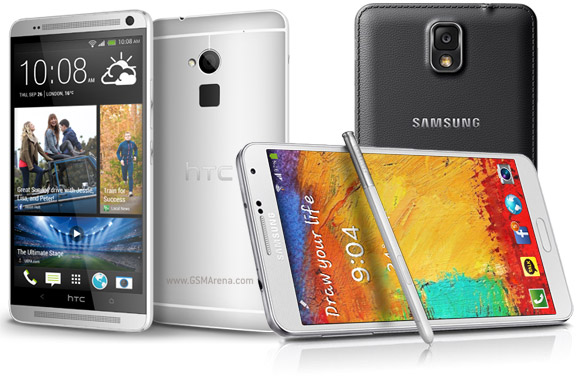 Still, the One Max is clearly angling towards the multimedia crowd - quality audio hardware and speakers mean more than a better music app out of the box. Audiophiles are very picky about the apps they use so chances are they wouldn't have stuck with the default audio player even if it did have an equalizer. Same goes for the video player.

The more capable IR remote control app is another plus as is the amazing battery life. Performance is not cutting edge, but Snapdragon 600 still has plenty of bite.

The HTC One Max is also suitable for an older and perhaps less tech-savvy crowd - the data transfer from the old device is done through a simple wizard, Kid mode prevents any accidents when you're using the phablet to keep the children occupied and having a document editor instead of a file browser is good too. Some people don't care about the file system as each app handles its own file types, but having to install an app just to edit Word files doesn't sound ideal.

Photography is the one spot where the One Max lagged noticeably behind, but if all you do is post on Facebook the difference is reduced significantly. Plus, those Zoe Highlights videos are very cool and take zero effort.

It's also rather big for a pocketable device and while that has been said for every phablet yet, the size and weight will be a deal-breaker for a sizable group of potential buyers.

The Samsung Galaxy Note 3 packs such a heap of buzzwords that anyone but a power user risks getting lost. You don't have to use all features though and the Note 3 comes with almost anything you need out of the box (save for the Office document editor).

The S Pen is amazing for note taking and many of you you will find themselves using it all the time. The multitasking options are the best we've seen too, the Galaxy Note 3 is a perfect post-PC device that can really boost your usability.

With KNOX Samsung is clearly targeting the business crowd, many of whom probably had a PocketPC in the heyday of the stylus. But again, the S Pen is in a different galaxy compared to a regular stylus.

The Snapdragon 800 chipset, 3GB RAM, LTE-Advanced and even the USB 3.0 port future-proof the device and Samsung has a pretty good track record when it comes to updating its flagship devices (even if the company takes its sweet time on occasion). Plus, you can swap out the battery when it gets old and add more storage on the cheap.

The Galaxy Note 3 excels in video capture with the unprecedented 2160p recording and the best 1080p @ 60fps recording we have seen so far. Even though low-light performance is not great, daylight photos turn out very good.

The One Max snagged the audio quality title, but Adapt Sound and other features of the Samsung music player will help you squeeze out the best of your headphones.

The Samsung Galaxy Note 3 is also more compact than the HTC, so some of those who are scared off by the sheer size of the One Max might find the Note 3 to be in the sweet spot.

This is the time to bring up price - both the HTC One Max and Samsung Galaxy Note 3 are priced the same, or will be soon enough in the places they are not. Keep in mind that this is for a 16GB One Max and 32GB Note 3, but since both have microSD cards it's not such a huge deal.

The price difference seems steeper when you consider that with the HTC One Max you're getting the older chipset and the camera from the One Mini. Neither of those things are necessarily show-stoppers, but it's hard to shake the feeling that you're just getting merely an upscaled HTC One rather than a proper powerhouse.

The Samsung Galaxy Note 3 has plenty more to offer to a consumer than the Galaxy S4, so its price premium is well justified. Just make sure you're not getting the Exynos version - that one lacks LTE and 2160p video.

In the end, both phablets seem to target slightly different groups of consumers so they might find a way to co-exist peacefully. But there is some overlap in target consumers and the more advanced, compact hardware of the Note 3 will bring them to Samsung's door.