The international Huawei P8lite boots the company's own EMUI. It's the latest EMUI 3.1, which is the first iteration to be based on Android 5.0 Lollipop, instead of KitKat. The US model however comes with only Android 4.4.4, which is a big question mark. 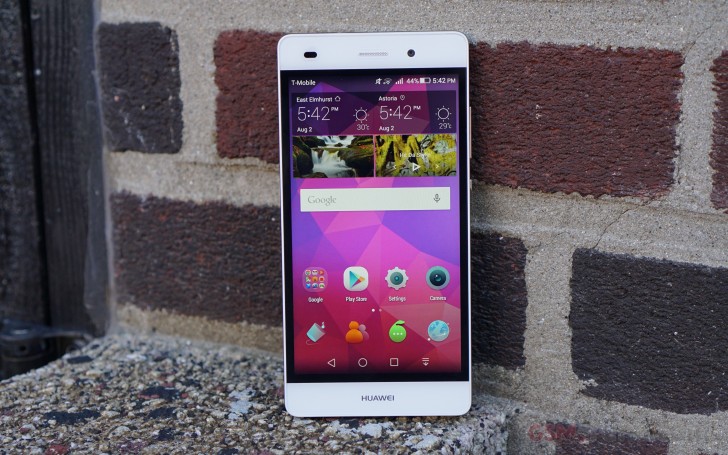 We already got acquainted with the EMUI 3.1 on Lollipop in the P8 review and since the US P8lite will probably get updated to the same version down the line, we will be basing the following software section on the more recent Lollipop build found on the Kirin-based P8lite.

Everything seems to be identical to the UI on the P8, save for a few advanced features that have been removed. EMUI 3.1 is based on Google's latest platform and yet, it is the similarities with previous Emotion UI versions that seem to stick out, rather than the differences.

Huawei may have adopted the new core for the sake of all the performance, stability and new API improvements it brings about, but, it is still heavily customized and, on the surface, the OS has retained its signature look and feel.

Fans will also be happy to know that the OS is still packed full of various extras and additional functions, baked right in. Although, frankly, not as many as the P8 and sometimes weirdly differing in minute details.

The default lockscreen features a nifty "sunshine" effect as you drag your finger across. Huawei's signature feature is the option for changing the lockscreen wallpaper automatically with beautiful images on various topics. You can also have widgets on the lockscreen, iOS-style shortcuts, and even dual clocks when roaming.

The graphics themselves are referred to as Covers and the phone comes with a serious collection of those as well as an app to download even more. They are really being treated like first class citizen with a dedicated download center, complete with channels, subscriptions and auto-updates. You can actually go in, set a few of your preferences and let the covers cycle between every screen wake, so you always have something fresh to look at. That's probably our favorite feature in EMUI as the images make for a stunning and ever-changing lockscreen.

Customizable covers with downloads and subscriptions

Swiping from the bottom of the lockscreen reveals a very iOS-like quick shortcut menu. It holds a few options for controlling the covers and cycling through them, as well as shortcuts to a recorder, calculator, flashlight and the camera.

There are nine homescreen panes at most - and at least a couple of them will be populated by the preinstalled apps.

The theming engine is so powerful that it can basically transform the UI into and offer incredibly varied experiences. On the surface, it seems to be directly borrowed from the Huawei P8, but unlike its bigger sibling, the P8lite doesn't have access to an online database or ready-made themes. This is slightly odd and the only reason we could think of for shaving this nice feature is the different screen resolution. Still, the rest of the theming engine is intact and if you don't fancy any particular part of a theme or wish to create one from scratch, every single aspect is customizable.

The Huawei P8lite features a task switcher that lets you swipe away unwanted apps, and there's a "Clear all" button that also informs you how much memory you've freed up.

But the P8lite isn't just big on eye-candy. Huawei has invested quite a lot of effort in various usability and accessibility features and most things that are not customizable through theming can still be rearranged and moved around. The phone comes with features, such as customizable navigation bar, simple homescreen, Do not disturb mode, and even one-hand optimizations for system apps.

Naturally, this is also carried over from the bigger P8 model and while a lot has been kept intact, there are a few advanced features missing in the lite version. All of the advanced connectivity options like Wi-Fi+ and Signal+ are absent. While the latter requires additional hardware to receive radio signals from all directions, Huawei could have left Wi-Fi+ on, as its purpose is to simply switch between mobile data and Wi-Fi to ensure the best possible connectivity.

The Do Not Disturb mode is self-explanatory - you can schedule it when to turn on and off, and you can add a list of exceptions.

EMUI 3.1 offers granular control over app permissions and their access to various system functions, such as network data and notification areas.

Huawei has given battery management an equally thorough treatment. EMUI has a dedicated interface for managing what it refers to as protected apps. The notion is that only applications that are deemed necessary by the user can be left to run in the background and consume battery and possibly network data, when the screen is off. Any app not on the list has no such privileges. This level of control is astounding and we really wish that other manufacturers would adopt similar mechanisms to give back users granular control of their hardware.

The bottom navigation bar with the default Android controls is customizable - you can swap the task-switcher and back keys, or even add a shortcut for the notification area. You can hide the navigation bar and bring it back with an upwards swipe from the bottom.

There is also a one-handed UI mode, for easier menu surfing on the go.

But Huawei didn't stop there either and if this level of customization wasn't enough, there is an array of other advanced control methods and accessibility features as well. We already mentioned Film navigation, but sadly, it is only available on the bigger P8 along with other shortcuts that take advantage of certain tricks with the capacitive touch screen.

Still, motion control is present, just like in the P8, although it is also missing a few options. The gestures on the P8lite include flip, shake, double touch and draw. Oddly enough, the latter two are missing from the P8, which however has pick up, raise to ear and tilt on offer. It appears that each option is heavily dependent on existing hardware and it is not merely a case of removing things for the cheaper version.

You can enable the so-called Suspend button - it's a virtual key you can move anywhere on the screen, allowing you to expand it to the primary Android keys - Back, Home, Task Switcher, Lock and Close all running apps. It will help you control your P8lite single-handedly, but if that's not enough for you, there is always the dedicated One-hand mode - it uses the accelerometer to move the keyboard, the dialer and the navigation bar to the left or right side of the phone.

A few other things from the P8 are also missing on its lite sibling. Some of which, like "speech awareness" obviously rely on dedicated hardware the P8 is lacking, but others we would have really loved to see, like Smart cover, Smart headset control and Knuckle recognition, but that is just nitpicking.