With the Watch Urbane, LG has decided to go with a two-piece square box, which is a lot more compact than that of the G Watch R. The material itself makes quite a good first impression. It is neither glossy, nor too plain, with a sort of satin finish that feels soft and premium. Whatever the coating, the box, as well as the internal compartments, are extra pleasant to the touch.

The inside of the box is neatly packed with the watch siting comfortable on a cradle of the aforementioned material and underneath it, three separate containers. LG obviously paid due attention to the packaging and, frankly, presentation plays no smaller part in the premium category than the actual content. Other than that, the Watch Urbane is bundled with the same set of accessories as its predecessor.

Inside the box, you get a sturdy USB cable, a power adapter and the proprietary round charging dock. The round magnetic station works exactly the same and looks almost identical, with five pins to the side and an LG Logo in the middle.

This led us to believe that the two chargers are interchangeable, but this is not exactly the case. The Watch Urbane doesn't fit seamlessly in the older G Watch R's dock. The magnet still pulls it in, but the match just isn't perfect. With some fiddling, you'll be able to properly position it to get charged if you have to but it just won't be as comfortable as using the original.

The Watch Urbane has a slightly changes charging dock

The Watch Urbane is definitely targeted at a different audience. Whereas the G Watch R was a little bit sportier with its black plastic casing, the obvious intention with the Watch Urbane was to bring a lot more class to the exterior. Both devices are stylish, but in quite different ways.

The LG Watch Urbane is a lot more sophisticated and "grown-up". Its metal body and stitched leather strap give out a more classic timepiece feel. Really, it is quite simple, the G Watch R is something you could wear jogging or riding a bike, while the Watch Urbane feels better suited to more formal settings.

The sensors are all still there and you could definitely use the Watch Urbane in your workouts just like its predecessor, but its exterior isn't really the mud-sweat-and-gear type. Speaking of, the silver metal body is quite slick, but easily covered in smudges. On the back, things are a lot cleaner. The plate is still metal, but with a matte finish and a circular brushed-metal accent, covering most of the area. It definitely looks and feels classier than the all-plastic shell of its predecessor. 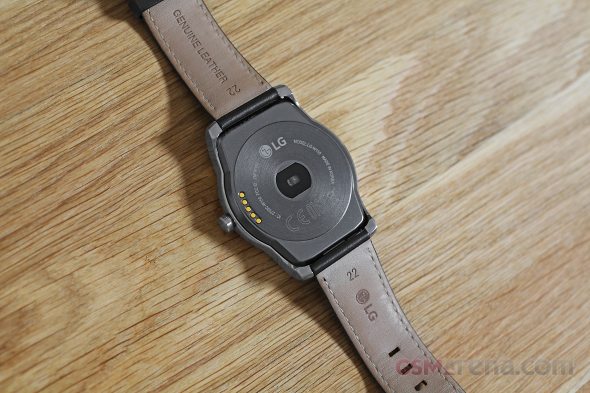 The overall shape of the unit is quite similar to the one of the G Watch R, but slightly slimmer all-around. The exact measurements are 45.5 x 52.2 x 10.9mm and the watch weighs in at 66.5 grams. It is clearly elongated and the angle at which it slopes toward the strap is a lot softer. So, even though the Watch Urbane is smaller on paper, its shape makes it look a bulkier when put on. It is also a few grams heavier, undoubtedly due to the metal shell. After wearing both devices for quite some time, there is a noticeable difference. The Watch Urbane simply refuses to lay as close to your wrist as the G Watch R.

The little accents tie everything together

The metal bezel is notably thinner and has a softer slope toward the screen. The painted number dial is also missing, which we are sure nobody will miss. The strap on the LG Watch Urbane is made of genuine leather and so was the one on the G Watch R. This time around, however, the design benefits from nice little accent such as the stitching and a buckle in the same color as the body.

The Watch Urbane comes in two color options. The silver, which we have, has an almost chrome-like finish, while the other is a more garish rose gold. Part of the effort perhaps to target a different demographic than geeks and outdoor enthusiasts. Maybe even reaching out to potential female buyers but, frankly, we can't really see the Watch Urbane pulling this one off.

The strap is once again a standard 22mm, so it can be easily swapped out. Perhaps a metal one down the road would make a difference too. Anyway, the current one is made of leather, like the G Watch R's, but it just looks and feels better. The material is a lot more solid and the finish looks more durable, which was definitely a problem for the G Watch R.

The buckle on the LG Watch Urbane has gotten quite a bit smaller. It is made of metal, just like the body and really feels sturdy. Plus, you can't go wrong with such a classic mechanism. It just works and adds another nice touch to the overall appearance. 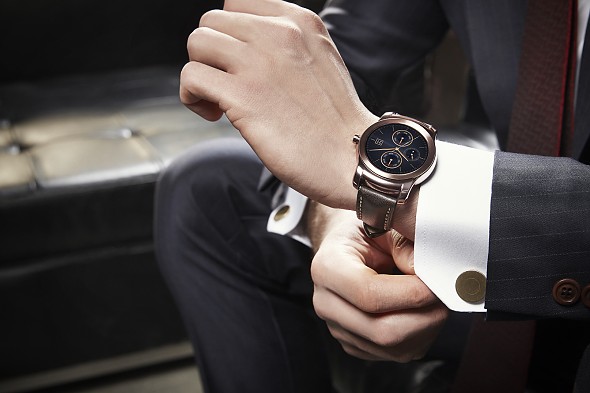 The main goal of the Watch Urbane really seems to be a different kind of appeal. The device does look a lot more sophisticated, a clear attempt to make a geeky gadget more relevant in a corporate setting.