The Google Pixel 3 and Pixel 3 XL will most likely launch on or around October 4. On that date there will be a flood of YouTube videos detailing people’s experiences of switching from a non-Pixel phone to a Pixel 3.

How do we know? FameBit is a Google-owned service that connects companies looking to do some marketing with social influences. A posting on the service asks Canadian creators to prepare just such videos. And those will go live on (you guessed it) October 4. 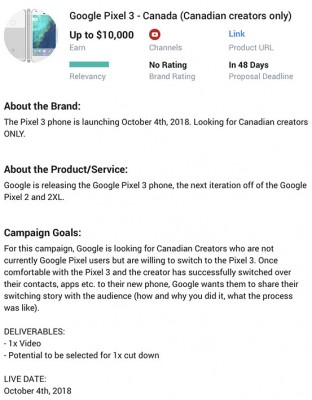 The date isn’t a huge surprise – the Pixel 2 and 2 XL were announced on exactly October 4 2017. Android P is likely to launch a couple of weeks before that on August 20th. The new Pixels will be the first to run P out of the box, the older Pixels will get it as an update (probably before October).

Of course, we don’t have to wait that long, numerous rumors have given away most details. We’ve seen the design, the notch, some live photos even, how the Snapdragon 845 chipset handles Geekbench and more.

That's the same as Apple and their users always claiming how optimized iPhone is supremely compared to others. And it's not true. Just less featured and more basic. Not the same as being very optimized.

i was gonna reply to that turd of a comment, thanks for doing it already

though i do agree but since it is a pixel, i doubt the 4gb ram could be issue, they are so optimized!