The Lumia 950 XL has the same camera as the Lumia 950 - a brand new PureView sensor. It uses a 1/2.4" BSI sensor with 20MP resolution. In addition to the new sensor, it also comes with ZEISS-certified optics, an optical stabilization system and a triple-LED RGB flash (no more red-eyes). The ZEISS lens has a really wide 26mm equivalent field of view wide, as well as a really wide F/1.9 aperture. 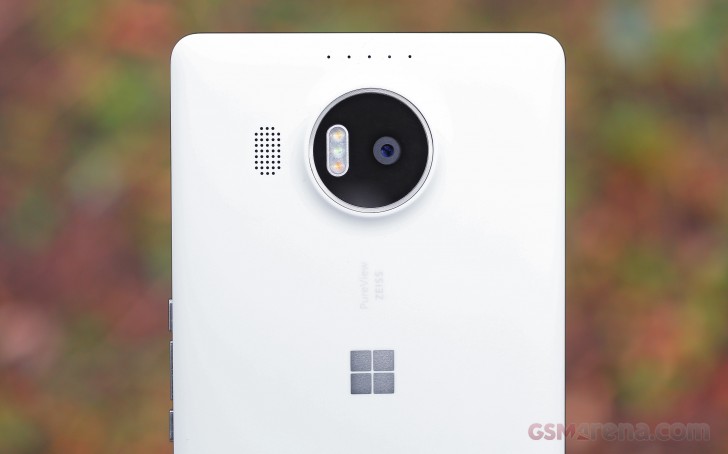 We are also giving credit to Microsoft for keeping the hardware two-step shutter key and its iconic Lumia camera interface.

The new (Windows) Camera app is available across all Windows 10 Mobile devices and share identical interface - a top expandable bar with settings, plus an additional pop-up ring-based interface on the right side of the screen.

You can access all of the rings simultaneously by sliding the on-screen shutter button to the left. This will stack sliders for all six settings next to one another allowing you to easily fiddle with them all at the same time.

The settings (white balance, focus, ISO, shutter speed and exposure) you modify are kept at the values you chose, with the others adjusted accordingly by the software. We really like this interface - it's intuitive and powerful at the same time.

Unfortunately Microsoft has removed the Lumia Panorama app from the Store just recently and there Windows Camera app does not support panoramic images. Microsoft previously stated that it will be removing all Lumia lenses, and yet it doesn't provide an alternative. You have to rely on a third-party app/lens for pano shots.

And while this interface is shared across all Lumia smartphones running on Windows 10 Mobile, the features are not. The Lumia 950 series has three exclusive features, courtesy of their powerful hardware.

The first feature is Lumia Rich Capture, which is Microsoft's secret camera sauce. The capabilities of Rich Capture are amazing, but its function is not exactly transparent to the user. Sometimes it would take a few shots, stacking them to achieve a sharper detail, while other times it would act as an HDR mode, doing a great job of rescuing the blown-out highlights in high-contrast scenes. Yet other times it wouldn't make any visible change to the images we shot at all.

If the camera has actually used its magic on your photo, you would be given the chance of editing the tonal properties of the shot - the strength of the HDR filter, to say it simply - after the fact in the gallery.

But as we said, its behavior is unpredictable, as it lacks a Forced mode. If the algorithm behind the Rich Capture decides the scene does not require stacking a few shots with different exposures, it will just snap a regular picture and you won't get to adjust the enhancements, however small they may be, later on. There is no way of knowing what will happen though until you open the Photos app - if there is no Edit Rich Capture key, then the sample was not taken in Rich Capture mode.

If you use the Rich Capture at night with flash on/auto - the camera takes pictures with the flash, without the flash and with different flash settings. This is called Dynamic Flash and later you can tune the light (the flash strength) in the photo with a slider by your preferences.

The title speaks for itself really. Unlike Apple though, which saves an mp4 movie and the picture, the Lumia 950 XL saves just the picture with additional data in the jpg file. Any Windows 10 Photos app (Mobile, Desktop, Xbox) will play your image animated before revealing the final snap. The bummer however is that on the phone you cannot play the Live Image as easily as you can on the iPhone.

Any other viewer image editor will treat it as a regular static jpg image.

The benefits of having a higher res sensor include the option to get lossless zoom of just under 2x for the 8MP shots.

The 1080p videos benefits more, as they get more than 2x lossless zoom during video and the quality stays quite good.

Panorama and HDR options aren't available in the Windows Camera app. Lumia Panorama lens is downloadable for free and allows you to snap 50MP panoramic images. As for HDR - there is Rich Capture for that.

The Lumia 950 XL camera is quick to start but auto focus is not that fast, especially as it gets darker. The shot-to-shot time is reasonably short but when shooting 4K video or one of those Rich Capture shots (or rather several of those) - saving can get slow. The same goes for the Panorama app as well.

Our overall impression from the camera is that it certainly takes its time to do its thing. Luckily, the image quality more than enough makes up for those.