The video player itself is as simple and limited as it could possibly be.

You just hit the video box in the gallery to get a list of all videos available on the phone. And the controls while playing a video boil down to play/pause, next and previous buttons, as well as a draggable progress bar.

The codec support is pretty limited with DivX and XviD nowhere to be seen, at least officially. We tried a few samples and we found the XT720 to handle XviD videos of up to WQVGA resolution and no longer than 10-20 minutes. Bigger files (both resolution and time) seem to need more processing power than MILESTONE XT720 can offer. Of course that can’t be entirely true since it plays its own HD videos captured with the camcorder. The only logical explanation is the lack of proper software support.

Music player could use an update

Sadly, the music player saw no updates in Android 2.0 and 2.1. Don’t get us wrong, the Motorola MILESTONE XT720 is not too bad at managing your audio files but there’s definitely room for improvement.

The first screen of the music player has four large buttons, which cover the four ways to sort your music collection – by artist, album, song or by user-created playlists.

The functionality of the music player hasn't changed much. It has that great feature that allows you to quickly look up a song in YouTube or Google search by holding down your finger on a song. What's even better, the YouTube search results are loaded Straight into the YouTube client.

Besides gradual typing for searching a specific song, there is an alphabet scroll which appears on the right side of the track list.

There are still some shortcomings of the music player that need addressing though. There are no equalizer presets, nor any alternative skins.

The Motorola MILESTONE XT720 is equipped with an FM radio with RDS. The interface is simple – there’s a tuning dial and you can save as many as 20 stations as favorites. You can also listen on the loudspeaker, but the headset is still needed.

Motorola MILESTONE XT720 performed quite impressively in our audio quality test. It's one of the loudest handset we have seen and it also delivers nicely clean output with audio tracks sounding just the way they were meant to.

The frequency response is spot on with the greatest deviation being the 0.16 dB, a value only detectable in lab conditions. The noise level and stereo crosstalk readings are great and so are the distortion levels and the dynamic range. 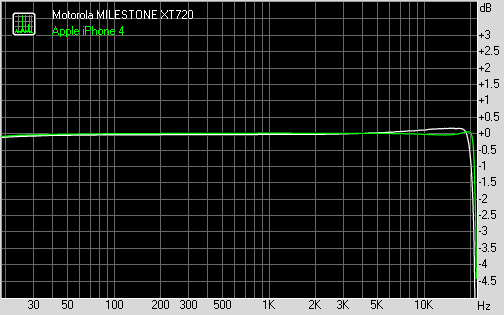