The Nokia Asha 311 comes with the standard for the family 3" WQVGA LCD. However there are some nice upgrades compared to the unit we saw on the Asha 305. For one, there's a polarization filter here that should improve sunlight legibility. There's also a protective layer of Gorilla Glass on top of the display for extra protection and those are normally really hard to come by in this class.

The Nokia Asha 311 display is hardly the best around

However, the screen underneath is not too bright and the low resolution gives icons a dot-matrix-printer look. The colors look a bit washed out as well, but to be fair, competition is not doing much better in that aspect.

This time, Nokia went with a capacitive screen, which is far more responsive than on the Asha 305. It's not as good as on the entry-level droids, but still an improvement.

And here come the Asha 311 score from our display sunlight legibility test. It actually fared impressively well, beating quite a few elite competitors. That polarization filter that Nokia installed is obviously doing a marvelous job.

Here's a photo of the screen's RGB matrix under a microscope. 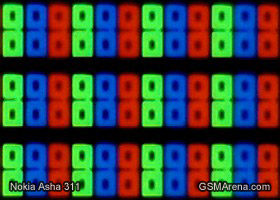 We can't say we're too fond of the Nokia Asha 311 in terms of design but the build looks solid. Fingerprints are an issue and overall, it's the looks that raise doubts not durability.

It's not that you could realistically expect much better in this price range. Good looks are normally achieved by the use of expensive materials and those just can't be squeezed in a budget this tight.