Near stock Android Oreo, with Nova Launcher on top

Like many other gamer-centric PC brands, Razer has managed to gather quite a bit of negative reputation over the years for including bloated UIs and various software suites on its computers. Thankfully, it has decided to adopt a vastly different policy for its mobile OS and is sticking to it for the Razer Phone 2 as well.

Whether the decision came about through a strive towards simplicity, a concern for performance or simply as a time- and RnD cost-saving measure, it all adds up to a nearly stock Razer ROM.

The Razer Phone 2 boots Android 8.1 out of the box. Considering the minimal amount of extras and modifications done on top of Google's mobile OS, we are looking forward to quick and timely updates. 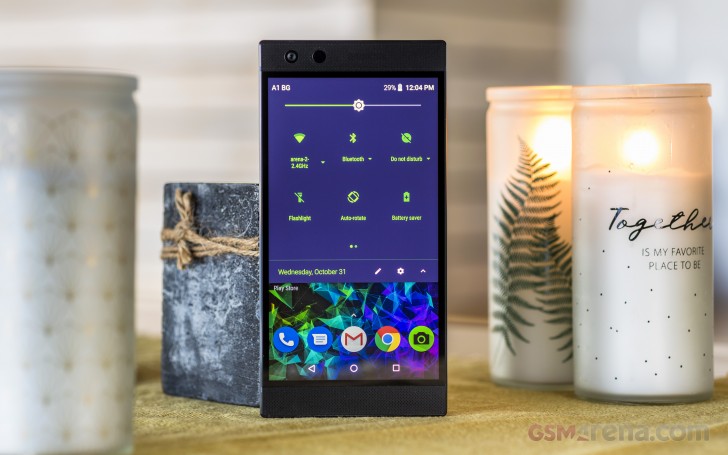 The cool part is that despite running a surprisingly clean Android install, with a very minimal app package on top, Razer still found a nifty way to stay true to its roots and deliver all the "swag" its fans have grown accustomed to, without too much bloat. The solution in question is a custom Nova Launcher Premium install, that ships with every Razer Phone 2 by default just like it did with the original Razer Phone.

The latter opens up a tremendous amount of UI customization options. You can pretty much tweak every part of the UX to your liking. For instance, out of the box, the Razer Phone uses a Pixel-Style up swipe gesture to enter into a vertically scrolling app drawer. After a few clicks, we were able to remap that gesture to something more relevant to us. For instance, bringing out a classic app drawer icon, or switching to a horizontal layout in the app list or even tweaking the appearance of the notification badges and the transition animations.

The sky is the limit with the Nova launcher and it's no wonder it is still one of the most popular custom launchers out there. Plus, Razer worked with the Nova team to sprinkle in some extra stuff of its own as well. There is a powerful Razer theming engine running on top of Nova. Just fire up the Themes app and browse a selection of well-crafted themes, courtesy of Razer themselves, absolutely free of charge.

Besides tweaking the usual things like wallpapers and icons, these actually change some color accents deep within the UI itself, like the notification shade. Most default Razer apps change their color scheme accordingly as well.

While this color accent approach works pretty well overall, there are still a few areas that need improvement. For instance, you can stumble upon random elements in the UI that should have been affected by the color scheme of a given theme, but are, instead, left to stand out as an odd patch.

Then, there are certain system apps, notably the Phone and Contacts app that remain unaffected by custom theme colors at all.

Last, but not least, most themes in Razer's store make the deliberate design choice of selecting very close accent colors, which often makes it really hard to distinguish whether something, like a quick toggle icon, is active or not.

Other than these small gripes, however, Razer's selection of themes is constantly growing and really high quality. There is a little something for everybody to like in the Theme library and especially so if you are searching for a masterfully crafted look based on your favorite game titles. Once again, Razer proves it knows its audience very well.

Since most of the looks and feel of the Razer UI is subject to some form of customization, there is no real point in touring the basic controls. As already mentioned, you can set up the app drawer any way you like it, the same goes for the homescreen, the navigation gestures and the optional Google Now pane.

The notification shade is a pretty stock Android affair. Well, minus the color customizability previously mentioned, that is. One swipe down for notifications and another or a two finger one for the quick toggles. These can be rearranged freely.

One toggle, in particular, seems to stand out - DOLBY. The pair of powerful stereo, front-facing speakers on the Razer Phone are THX certified and powered by DOLBY ATMOS technology. The latter threw its own equalizer software in the mix, complete with custom profiles. You can quickly switch between these from the DOLBY quick toggle. That's a great convenience to have since the pair of speakers tends to sound really hollow and distorted out of the box. What we went for is the Music preset, with the Intelligent Equalizer curve adjustment to warm it up, which fixed the sound quite a bit.

Most other aspects of the Razer Phone UI are stock or almost nearly so as well. This includes the app switcher and most of the main settings menu as well. Split screen is supported.

Speaking of settings, there are a few important aspects of the Razer Phone 2's specific Android experience that you can tweak. The display menu, for instance, is your primary access point for tweaking the advanced IGZO display on a system-wide level. By default, the Razer Phone 2 runs at its native WQHD resolution and the instantly impressive, buttery-smooth 120fps. There are some rather insignificant battery endurance benefits to be gained by lowering the resolution, but running at a lower refresh rate is what can really make a noticeable difference in battery life.

You could do that, but we don't really advise you to do so since you won't double your battery endurance if you decide to rock 60Hz, but you will miss out on this device's headline feature. Of course, you could only use the display to its full potential (WQHD and 120Hz) while gaming. To do so, Razer provides a nifty GAME BOOSTER utility.

It actually serves as a complementary feature to the resolution and refresh rate adjustment controls, found in the Display menu, while also adding a maximum CPU frequency setting to the mix. This does make things a bit confusing, which Razer hasn't addressed since the original Razer Phone. The idea is that the GAME BOOSTER settings operate alongside the system-wide once. So, if you force 60Hz in Display settings and then tell a game to run at 120Hz from GAME BOOSTER, the end result might be a game running at 120Hz, but it could also swing the other way around. The situation is even worse when you mix and match resolutions. 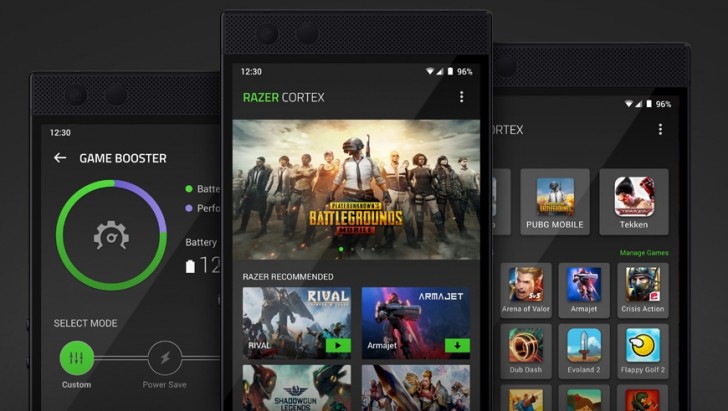 Certain apps can end up rendered in a window or with wrong touch input calibration. The remedy, for the time being, is to always modify the system and GAME BOOSTER settings together. So, if you have a certain game set at 720p and 120Hz, for example, you need to go into Display settings and dial the same in system-wide to get the best chance of running the game properly. Razer really needs to bind the two sets of settings together.

Besides the GAME BOOSTER app, there is also Razer CORTEX. Things are thankfully more straight-forward with this one. It is simply a custom launcher for all your games, combined with a curated list of advertised games, which simply link you to the Play Store. There is also a nifty quick shortcut to open GAME BOOSTER.

Of course, we can't skip a tour of the new Chroma control app for tuning the phone's RGB logo. It offers quite a few options. First off, you have to decide on when and how you want the logo to light up. There are three convenient modes to choose between: High simply leaves the light on all the time, practically destroying your battery life. Still, that's the mode you'll probably want at a LAN party. Medium ties the logo's lights to the display. They are on only when it is on or when you receive a notification if you enable that option. 'Low' only lights up the logo for notifications, nothing else. 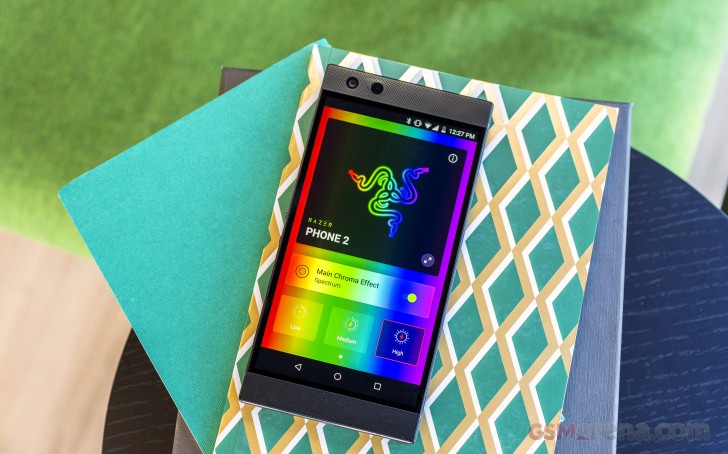 Speaking of the notification toggle, that is meant to make up for the lack of a dedicated notification LED on the front of the device. The only downside, besides only being able to see it from the back side is that there are no custom notification settings available. We would have loved to see options for things like patterns, colors, and intensity for different apps. Similar to what Samsung has for its Edge Lighting. To Razer's credit, they do pick up the notification's color and use it to shine the logo automatically. Pretty nifty.

The Chroma software does offer a lot of customizability, though. Just not for notifications, but rather a general purpose lighting. You can dial in your desired brightness, as well as the color and its intensity. Razer even threw in a HEX input field, so you can really properly select your color of choice. Then there are two other modes to choose form, besides a static light: Breathing, which is pretty self-explanatory and Spectrum, which cycles through colors.

There is still plenty of room for optimization, though. The Spectrum and Breathing modes, for instance, could benefit from a speed control, since both are a bit too slow for our taste. One other nifty Chroma trick the Razer Phone 2 can do involves Razer's new Qi wireless charger. 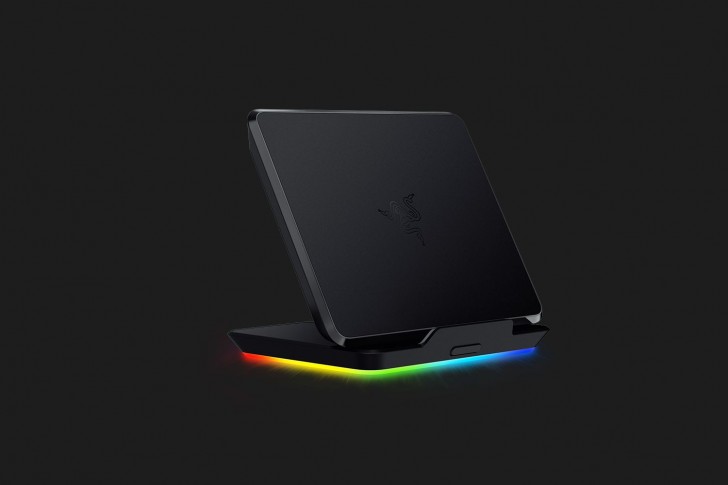 Naturally, it's a separately sold accessory, but if RGB is your thing, you really need it in your arsenal. It shines bright and provides really smooth RGB transitions along a rim near its bottom side. While charging the Razer Phone 2 (or any Qi smartphone for that matter) these shine in colorful waves. We would be lying if we called them anything short of mesmerizing. Also, while placed on the stand, the Razer Phone 2 passes any notification light on to the charger, making it shine in the appropriate color.

That last bit is bitter sweet, though, since it makes us wonder why Razer omitted integration for either the phone and/or the Qi charger with the rest of the wide Chroma ecosystem of devices. We really hope something along these lines is in the works, since we really see no reason why all your Chroma things can't put on a synchronised light show.

Just to top the software section off, there are a few more extras in the Razer Phone's settings, which are worth mentioning. Nothing too spectacular or out of the ordinary, but it is still good to see double tap to wake and sleep, as well as toggles for the power button, double click gesture to launch the camera and the display turning on when you pick up the phone.