If you can remember back to the unveiling of the Galaxy Note7, before the unfortunate events that led to its demise were set into motion, there was a lot to get excited about both hardware and software-wise. That marked the beginning of Grace UX, Samsung's re-invented UI that stuck and is still being backed by the company, despite the Note7 fiasco. 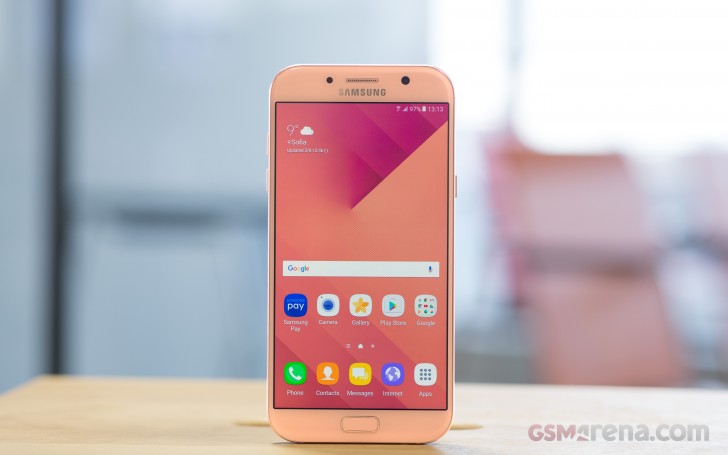 The new Galaxy A family is currently tasked with a tough ambassador role for the redone interface. At least, out of the box, that is, since many devices, like the Galaxy S7, have already received the new launcher in updates. It is important to note that just like its little sibling, the Galaxy A7 (2017) still runs on Android 6.0.1 Marshmallow under the hood. A Nougat update should be in the works as well.

The Always On Display (AOD) feature is a little hint that sort of gives away the new UI even before you unlock the handset.This 2017 generation of the A-series is the first to include the feature and it fits right in with the large 5.7-inch, AMOLED panel on the A7.

It is also the most recent iteration of the feature. It can display notifications from third-party apps, which wasn't the case with the early implementation on the Galaxy S7. There are three visualizations to choose from. Clock and Calendar are pretty self-explanatory, but there is also an Image mode for some extra AMOLED style points, although minus the added functionality.

Despite being easy on the juice in general, AOD will also dim itself accordingly to match light conditions and turn the display off entirely when the phone is pocketed. You can also set a schedule for even more control.

If you prefer to wake your phone with a button or simply don't like fingerprint readers, Grace UX has a pretty standard lockscreen for you to land on. It features swipe unlock by default, a couple of quick unlock shortcuts and a notification area. Of course, you can still use the fingerprint reader in the home button, if you want.

Lockscreen: plain • with notifications • Setting up a fingerprint • Reader options

It is pretty comparable to the reader on the Galaxy S7 - that is to say reliable, albeit a bit slow in modern terms. Besides unlocking your phone, it can be used for all sorts of authentication, like Web sign-in and Samsung Pay. But, more on that later.

The Homescreen is a pretty typical Samsung endeavor as well. You get Widget and Folder support out of the box, as well as a customizable number of screens to the right. To the left, there is a Briefing page, but you can disable it if its not up your alley. One notable new addition is the contextual icon menu. It is sort of like a 3D Touch feature, not unlike the one found on the Google Pixel phones - you tap and hold on an app and a menu appears. However, it offers just basic app handling actions and is not tied to the actual functionality of app.

The notification area should be quite familiar as well. A line of quick toggles is available above the notifications. Pulling the shade further down reveals all toggles, a brightness slider and a handy search field (Google prefers to put the search field on the homescreen instead).

We like the idea of the Block notifications button, it allows you to quickly mute notifications from pushy apps (games are often guilty of crying for attention when you haven't played them in a while). Still, the aesthetics of the new menu are an acquired taste. We can't say we like them a lot and we're not alone.

The app switcher is what you would expect as well - a colorful rolodex. The A3 (2017) might have skipped on the multi-window feature, as the smallest of the bunch, but both the A5 (2017) and A7 (2017) have it. Since both handsets are still running Marshmallow and not Nougat, where the feature is standard, it is a custom Samsung implementation. Some apps aren't supported, but those that are (as signified by an icon next to the X) resize and fit great. Furthermore, Samsung has added a few powerful features to crop out and transfer things between the split-screen windows. These are accessible by clicking the circle on the divider.

Moving on the app drawer, everything is still as expected - neat and orderly. You get support for folders here as well. Also, two sorting options, free edition and a convenient search bar that even pulls suggestions from the app store.

Breaking away, at least a bit, from the mundane, the A7 (2017) does have a few interesting baked-in tricks to boast. Some of them are housed in the "Advanced features" menu. There are a few interesting gestures to play around with, as well as a one-handed operation mode, which does make a lot of sense on a 5.7-inch device. Smart Stay never really managed to work correctly in our experience, so you might be better off skipping over it.

Secure folder has been Samsung's pride and joy for some time now. It relies on the company's acclaimed KNOX security platform and creates a separate zone so sensitive files (photos, documents, etc.) and apps can be locked away from prying eyes. Once you enter the Secure folder, taking a photo with the camera or snapping a screenshot places the file in the Secure folder. To access those from the regular gallery, you'll first have to move them.

The reason you want to secure your Samsung account with your fingerprint is that you get 15GB of cloud storage for free. Everything from contacts to photos can be synced and you get to choose which files are synced over LTE and which are left for when Wi-Fi is available (contacts, calendar and notes don't use much data, but photos do).

Selecting what to sync to Samsung Cloud

Samsung also has a couple of nifty features aimed especially at mobile gamers. These are the Game Launcher and Game Tools. Both have to be toggled on in the setting menu. Once that is done, you can find a special game folder on the A7 (2017). Adding any app to it, game or otherwise and then launching it results in some automatic, behind the scenes optimizations for better performance. If you opt for the Game Tools, you can adjust some resolution and quality aspects manually as well. There are also options for recording and sharing gameplay.